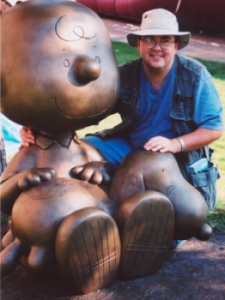 Our featured Reviewer for November 2006 was Scott C., an assistant webmaster for the Lincoln City Libraries web site, the manager of the library’s BookGuide site, and a member of the Reference/Public Service Departments at the downtown Bennett Martin Public Library. Scott has worked for the library in a number of different capacities, starting as a shelver at Anderson Branch in 1980, and has been one of the top contributors to the Staff Recommendations displays at the downtown library and on BookGuide. His first online review appeared on our site in March 2004. Reading for both education and pleasure has long been a part of his life, as seen in his responses to our questions about books and reading:

I grew up in the University Place neighborhood of Lincoln until age 14, then moved to near 40th and Superior, attending Dawes Jr. High and Northeast HS. I can clearly remember my mother taking me and my sister to the Uni Place library branch for books as a little kid – I can recall the comforting hiss made by the radiator in that building. I can’t clearly remember what books I enjoyed as a little kid – although I vaguely recall reading all the various Dr. Seuss books (I’ve still got my copy of My Book About Me) and for some reason the picture book Sam, Bangs and Moonshine by Evaline Ness and There’s an Elephant in the Bathtub by Roger Whitfield have stuck in my mind for all these years.

When I was old enough to start reading in the juvenile fiction section, I devoured every Three Investigators title I could find (originally Alfred Hitchcock and the Three Investigators!!), then the Hardy Boys and Nancy Drew series, the Danny Dunn series by Jay Williams, the “trick” books of Scott Corbett, the sports books of John Christopher, Marguerite Henry (my mom had a copy of Misty of Chincoteague autographed by M. Henry and Misty — with a hoof-print), Beverly Cleary, E.B. White, Mr. Popper’s Penguins, The Space Ship Under the Apple Tree, The Wind in the Willows, the Henry Reed books of Keith Robertson and nearly every non-fiction topic I could get my hands on at either the Uni Place and (later) Anderson Branch libraries. I still remember attending the Anderson Branch “grand opening” celebration.

I’ve been an “active” reader for as long as I can remember. Visits to the library were always something I looked forward to – I was excited to take part in the Summer Reading Program so I could get my little metal lapel pin. Not only that, but I had full bookshelves at home for books that I actually owned. I don’t know that there were any specific authors or individuals who “made me a reader,” although I recall my mother always being a regular reader so that may have influenced me. Both my parents have been voracious readers after their retirement.

Books are incredibly important to me. Although I am a confessed and unembarrassed TV addict, I’m also usually reading at least three books simultaneously – one at home, one at work, and one I carry with me to lunch breaks, etc. If I’m not filling up gaps in my schedule by reading, I feel like I’m wasting precious time. My love of reading lead me to working in the Northeast High School library and being inspired by the head librarian there, Edith Cassini, to pursue a library career. I got a job as a shelver at Anderson Branch while still in high school (1980), and have been with the Lincoln City Libraries in one position or another ever since then (including the long-defunct Audio Visual Department, where I met my future wife as a co-worker). One of my quirkiest library-related memories is of helping to go from branch-to-branch barcoding all the library books citywide in the late 1980s – but I suppose that really dates me.

My main reading interest has long been Speculative Fiction. When I read my first adult Science Fiction novel, Andre Norton’s A Storm Over Warlock, I felt like my eyes had been opened to a whole new world of imagination and speculation about the future of humanity. Ever since, I’ve read science fiction and fantasy books extensively, enjoying their “What If” elements. My mother was a big mystery and thrillers fan, getting me started on Agatha Christie and Alistair Maclean, and I’ve continued reading in both those genres as well.

There are so many authors who I regularly follow that I could easily spend my time only on their new books. Unfortunately, I work in a library and therefore have to walk by the New Books Display and inevitably find at least one new title that catches my attention every day. I also read lots of reviews for my job, and keep little scribbled notes about intriguing-sounding books that I hope to come across later. I’m a member of two book discussion groups that meet regularly (one SciFi, one mystery), so I’ve also got the “assigned titles” for those groups to keep up with as well.

When I read a good book, I find it very hard to contain my enthusiasm about sharing my opinion with fellow readers. If you’ve ever heard me on KZUM or KFOR as part of the group of library staff sharing book talks, you probably think I talk too fast…but that’s just because I have to try to control my exuberance at telling people about cool books! I think I probably have the ideal job – as the manager of the BookGuide site, it is actually my responsibility to connect people with books, in part by writing recommendations for the BookGuide pages. Add to that the reviews I’ve written for my science fiction club’s web site and my own blog, and I can’t complain about limited opportunities for booksharing.

I’ve been a life-long customer of the libraries, first of the Uni Place branch library, then the Anderson Branch library, and now mostly the Bennett Martin Public Library downtown. I first started working in a library at Lincoln Northeast High School, where I worked two of the three years I attended. I got a job as an “aide” at the Anderson Branch Library in 1980, started working in the Audio Visual Department at the downtown library in 1987, then in the Circulation and Reference Departments downtown. I’m still there, although the Circulation and Reference departments have combined with Youth Services to form the Public Services department.

I’m friends with the science fiction author Robert Reed, from here in Lincoln, and am the official webmaster of his website, www.robertreedwriter.com. I’m also a wannabe writer on my own, and have participated in National Novel Writing Month off-and-on for several years now.

Do you have a favorite literary-related website(s) you like to visit or that you’d like to recommend?

It’s hard to limit myself to one, so here are three I use quite regularly: The Internet Speculative Fiction Database, for writers of scifi, fantasy and horror. Stop You’re Killing Me, for the latest news and reviews of mystery fiction. And Fantastic Fiction, which is excellent for researching authors across all genres, and identifying “series order” for long-running series.

I enjoy using the site LibraryThing.com to catalog the materials I’ve read over the years. I’ve tried GoodReads.com, but prefer the way LibraryThing is organized, and highly encourage other readers to make use of it! LT seems more oriented towards actually cataloging what you own/read, while GR is designed more for social media sharing. GoodReads allows you to add books and audiobooks to your “shelves” but LibraryThing allows you to add DVDs, VHS, and Music CDs as well as the more traditional books and audiobooks. This has allowed me to catalog my entire music collection and extensive DVD holdings. [See Scott’s entire holdings on LibraryThing and What Scott’s Reading Now on LT.] I do actually have a GoodReads account, but don’t make much use of it…mostly just duplicating the book/audiobook entries from my more extensive LibraryThing account.

I actually have two. One of my favorite authors is Robert Ludlum, especially his earlier books from the 1970s through the early 1990s. The intricacy of his plotting, the details of his descriptions, and the pulse-pounding pace he set in such classics as The Bourne Identity, The Chancellor Manuscript, The Rhinemann Exchange, The Parsifal Mosaic and The Osterman Weekend still impresses me to this day, although I was disappointed in the books he put out in the last dozen years of his career before he died in 2001. Several novels have been released since his passing, but all have been written by other authors, and none hold a candle to Ludlum’s own work!

My all-time favorite author is a more obscure one. Alan Brennert is a writer I discovered via television – he wrote some of my absolute favorite episodes of CBS’s revived Twilight Zone series in the mid-1980s. Connecting with him as a writer in that capacity, I’ve tracked down all of his subsequent books. Kindred Spirits (1984) is my favorite – a contemporary relationship story (with a paranormal twist) of two damaged individuals who somehow manage to heal each other’s emotional wounds and prepare each other to face an uncertain future. Time and Chance (1990) is a fascinating exploration of the consequences of making choices, as two different versions of the same man are created by a life-altering decision made in college, and both men are given the opportunity to experience the “other path” later in their lives. Her Pilgrim Soul and Other Stories (1990) collects a few of Brennert’s Twilight Zone tales with several other speculative fiction or fantasy stories. And Moloka’i (2003) is a sensitive historical fiction about the experiences of a Hawaiian leper at a remote leper colony from the 1890s to the 1960s. Although the library only owns two of these four books, I highly recommend tracking the other two down if you have the opportunity — perhaps by the library’s Inter-Library Loan service!