This project was supported in part by the United States Institute of Museum and Library Services under the provisions of the Library Services and Technology Act, administered through the Nebraska Library Commission. 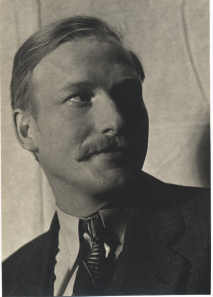 Rudolph “Rudy” Umland, 1907-1993, was a local farm boy who became a prolific writer of essays, short fiction, local history, and book reviews. He was educated sporadically at the University of Nebraska in the late 1920s and early 1930s. He possessed a penetrating intellect and a quirky and generous sense of humor. These qualities, displayed in his writing, attracted the interest of Lowry Wimberly of the English Department, the influential founding editor of Prairie Schooner. Wimberly got Umland a job with the troubled Nebraska Federal Writers’ Project in 1935. Umland rescued the Project, becoming its editor, then Assistant State Director (1936-1940), and State Director (1940-1941). When Umland left the Project to join the military in 1941, the response of his fellow Project employees made it clear that they had come to revere him.

Umland oversaw research, writing and editing for the Project’s most significant publications, including its folklore collections and the 1939 Nebraska: A Guide to the Cornhusker State, Nebraska’s contribution to the famed WPA American Guide Series. He socialized with, befriended or worked with many Nebraska writers, including Lowry Wimberly, Mari Sandoz, Weldon Kees, and Loren Eiseley. Umland’s connections, curiosity, intellectual acumen, and sense of humor made him an insightful and entertaining observer of the world around him.

Rudolph Umland’s writing, correspondence, and scrapbooks offer revealing portraits of life in Depression era Nebraska and a uniquely well-documented insider’s view of the local literary community and the Nebraska Federal Writers’ Project. His observations help us appreciate the surprising influence of Nebraska writers in shaping the national effort to better understand and document America’s complex cultural heritage, an effort that emerged in response to the crisis of the Great Depression.

Part I of this web exhibit will trace Rudolph Umland’s early life, his education, travels as a hobo, and literary efforts up to his finding employment with the Nebraska Federal Writers’ Project. By getting to know Rudolph Umland, we can better appreciate him as an observer of other writers, of historical events, and the remarkable depression era Federal Writers’ Project.

Part II of the exhibit looks at the Nebraska Federal Writers’ Project, its national origins, its evolution in the remarkable atmosphere of 1930s Lincoln, Nebraska; and its writers, goals and achievements.

Part III of the exhibit includes documents created by the Nebraska Federal Writers’ Project that reflect its local character, its innovations, and themes that joined it to a broader effort to redefine American identity in difficult times. This part of the exhibit also includes study questions, recommendations for further reading, reference notes and bibliography.

The exhibit is based on Rudolph Umland’s 15 volume Scrapbook and correspondence which he donated to The Jane Pope Geske Heritage Room of Nebraska Authors at Lincoln City Libraries in 1989 and the many essays and articles he published about local history and life in Lincoln and at the University of Nebraska in the 1920s and 1930s.