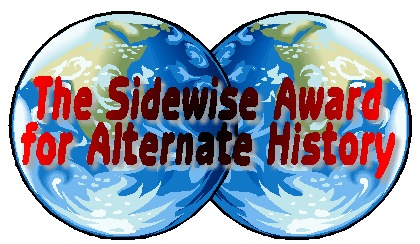 The Sidewise Award for Alternate History was conceived in late 1995 to honor the best “Alternate History genre” publications of the year, and the first awards were announced in summer 1996. The award takes its name from Murray Leinster’s 1934 short story “Sidewise In Time”, in which a strange storm causes portions of Earth to swap places with their analogs from other timelines. Two awards are given each year. To be considered, a work must have either first English-language publication or first American publication* in the calendar year prior to the year in which the award is to be presented.

The Short-Form Award is presented for the best work of less than 60,000 words. This includes short stories, novelettes and novellas, and poems. The Long-Form Award is presented for the best work longer than 60,000 words. This category includes individual novels and longer works. This list on the library’s Web site includes only the Long-Form winners. For a look at the Short-Form winners and all past nominees, please visit the official Sidewise Award Web site. In addition, at the discretion of the judges, a Special Achievement Award may be presented to honor a specific work or for a significant body of work which was published prior to the inception of the award; i.e., before 1995. NOTE: All books owned by Lincoln City Libraries are hotlinked to their entries in our library catalog, so that you may check on their current availability. If you see a title on this list that is not hotlinked to our collection, please consider ordering it through our Interlibrary Loan department.

Adrian Tchaikovsky
The Doors of Eden

Annalee Newitz
The Future of Another Timeline

Bryce Zabel
Once There Was a Way

2014
Kristine Kathryn Rusch
The Enemy Within

Bryce Zable
Surrounded by Enemies: What if Kennedy Survived Dallas?

2006
Charles Stross’ “Merchant Princes” series, including:
The Family Trade
The Hidden Family and
The Clan Corporate

2004
Philip Roth
The Plot Against America