The Discomfort of Evening (not yet in library collection)
by Marieke Lucas Rijneveld (age 29; youngest to ever win); translated from the Dutch by Michele Hutchison

Ten-year-old Jas lives with her strictly religious parents and her siblings on a dairy farm where waste and frivolity are akin to sin. Despite the dreary routine of their days, Jas has a unique way of experiencing her world: her face soft like cheese under her mother’s hands; the texture of green warts, like capers, on migrating toads in the village; the sound of “blush words” that aren’t in the Bible.

One icy morning, the disciplined rhythm of her family’s life is ruptured by a tragic accident, and Jas is convinced she is to blame. As her parents’ suffering makes them increasingly distant, Jas and her siblings develop a curiosity about death that leads them into disturbing rituals and fantasies. Cocooned in her red winter coat, Jas dreams of “the other side” and of salvation, not knowing where this dreaming will finally lead her.

A bestseller in the Netherlands, Marieke Lucas Rijneveld’s radical debut novel The Discomfort of Evening offers readers a rare vision of rural and religious life in the Netherlands. In it, they ask: In the absence of comfort and care, what can the mind of a child invent to protect itself? And what happens when that is not enough? With stunning psychological acuity and images of haunting, violent beauty, Rijneveld has created a captivating world of language unlike any other.

See the Booker Prize page here on the libraries’ BookGuide reader resources site for past winners!

The Woman in the Woods
by John Connolly (Connolly)

These are the 16th & 17th in the thriller series featuring Charlie Parker, a modern day detective who sometimes works with the FBI and sometimes goes rogue. This is NOT to be read at bedtime. Terrifying, gruesome, end of the world horror.

A Book of Bones
by John Connolly (Connolly)

Noah Selvaggio, a New York professor about to celebrate his 80th birthday, is about to take a trip back to his birthplace: Nice, France. He hadn’t expected to assume responsibility for his great-nephew the day before departure. Their journey is both a physical one and also one in which they learn to see the world through each others’ eyes.

When All is Said
by Anne Griffin (Griffin)

Maurice Hannigan orders five drinks one June evening, toasting the five people who have had the greatest impact on his life. In so doing, he tells his own life story. 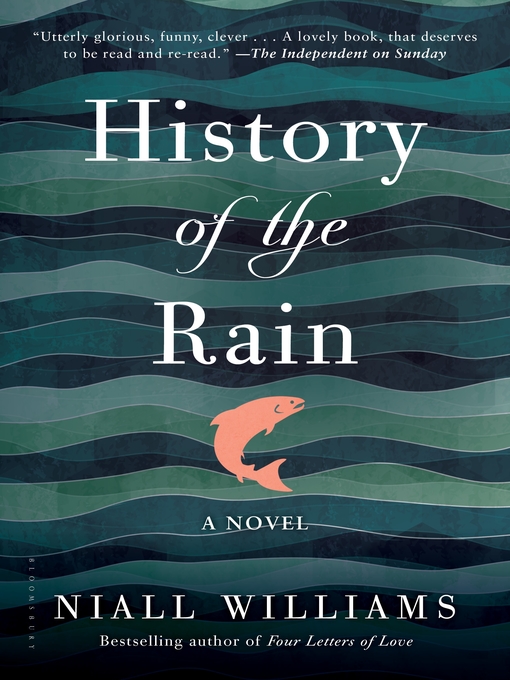 History of the Rain
by Niall Williams (Williams)

Longlisted for the 2014 Man Booker Award. Ruth Swain is bedbound in her County Clare attic bedroom. She is looking for an understanding of her father by reading the three thousand, nine hundred and fifty eight books piled in her bedroom.

Say Nothing: A True Story of Murder and Mayhem
by Patrick Radde Keefe (364.152 Kee)

Jean McConville, a young widow and mother of 10 children, in 1972, was shuffled out the door in front of her children in 1972 and never seen again. Her death was one of about 3,500 tied to the struggle between the IRA and Ulster (English rule) In Northern Ireland over a span of three decades. This is a true crime book that explains well the history The Troubles in Northern Ireland, including the complicated breakdown of groups.

A Ladder to the Sky
by John Boyne (Boyne)

Written by the author of Boy in the Striped Pajamas, this is a psychological thriller and a satire about a young writer with no scruples who charms, steals from, and devastates authors with more talent than he has.

Vivian lives alone in Northern Ireland, with no job or social life. She begins a quest to find a friend she hopes will be named Penelope. This is an odd book that touches on friendship, loneliness, and hope. The story of the author is more exciting to me than the book was.

Connell and Marianne do a social dance around each other as they leave high school and begin life at Trinity College, trying to understand first love, class differences, and friendship.

Can Anybody Help Me? (not yet in library collection)
by Sinead Crowley (Crowley) (2013)

Are You Watching Me? (not yet in library collection)
by Sinead Crowley (Crowley) (2015)

Adam Dunne needs to find his girlfriend, Sarah, after her passport is returned to him in the mail and she has not returned from her international business trip.

The Pull of the Stars
by Emma Donoghue (Donoghue)

Nurse Julia Power is a nurse for expectant mothers at an understaffed hospital in Dublin. Nurse Power’s patients are quarantined in 1918 because they have the new Flu. Doctor Kathleen Lynn, rumored to have helped the Rebels during the 1916 Easter Rising two years prior, assists with better practices than the male doctors available. Volunteer helper Bridie Sweeney gives perspective on children of poverty “thrown into the pipe” (growing up in a home run by nuns & now knowing family or their birth date/year.)

Winner of the 2018 Man Booker Prize. Our unnamed narrator is a catalyst to teach us about the religious intolerance between Catholics and Protestants in 1970s Belfast, while violence of The Troubles is at its peak.

The Testaments
by Margaret Atwood (Atwood)

It is one of the two winners of the 2019 Booker Prize. The sequel to A Handmaid’s Tale has three narratives with very different roles in the world of Gilead.

It was on the shortlist for the International Booker Prize 2020. (It was published in Japanese in 1994.) A dystopian story about an epidemic of forgetting that happens on an island. As objects like flowers, ribbons, photographs, birds, etc. are banned they also disappear from memory. The rare people who don’t forget are sought by the memory police.