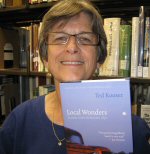 On February 8th, 2008, Meredith M., the curator of the Jane Pope Geske Heritage Room of Nebraska Authors, gave a BooksTalk presentation at Bethany Branch in which she shined the spotlight on several of the Nebraska authors who’ve appeared in the John H. Ames Reading Series over the past few years. Here are the authors (and the dates of their Ames appearances) she discussed.

Listen to this booktalk as an audio podcast!

Thursday, September 15, 2005 — Charles Fort, Poet and UN-Kearney Professor
Charles Fort, a Connecticut native, currently holds the Paul W. and Clarice Kingston Reynolds Chair in Poetry at the UN-K. Fort’s poems have appeared in many journals and have been anthologized in The Best American Poetry, 2000 and 2003. His books include: The Town Clock Burning (811 For – BMPL), Darvil (811 For), As the Lilac Burned the Laurel Grew, Immortelles, and others. (Ames DVD 811 For). Also in Nebraska Presence (811.08 Kos)

Thursday, October 20, 2005 — Pam Barger, Poet and Musician
Pam Barger, a poet, piano teacher, and a musician, holds a degree in music from UNL. Her work has appeared in a number of publications. Because she really enjoys both writing and music, Pam finds that music is a recurring theme in her writing. Her book: The Pinball God Let Fly (Heritage 811 Bar) (Ames DVD 811Bar – BMPL)

Thursday, November 17, 2005 — James Solheim, Poet and Children’s Book Author
James Solheim, an Omaha resident, is a graduate of Northwest Missouri State University and has an MFA from the University of Iowa Writer’s Workshop. He’s especially interested in the long poem. Solheim is also the author of several children’s books with long titles, including: It’s Disgusting – and We Ate It! True Food Facts from Around the World and Throughout History! (j641.3 Sol), and Santa’s Secrets Revealed: All Your Questions Answered about Santa’s Super Sleigh, His Flying Reindeer, and Other Wonders (jP Solheim). Ames DVD 813 Sol – BMPL Also in Nebraska Presence (811.08 Kos)

Thursday, January 19, 2006 — Shirley Maly, writer and world traveler
Lincolnite Shirley Maly spent many years writing for a living; she’s written advertising copy, public relations text, and technical language. But, her engaging descriptions in Love Affair with the Americas (917 qMal and DVD 917 Mal) arise from her experiences as a Peace Corps volunteer in Uruguay from 1992-1995 and as an extensive traveler throughout the western hemisphere.

Thursday, February 16, 2006 — Robert Reed, science fiction writer
Robert Reed hails from Omaha, moving to Lincoln to attend Nebraska Wesleyan University where he majored in biology. He stayed in Lincoln and lists “writer” as his occupation, with 110 science fiction short stories and ten novels to his credit. His newest collection of short fiction is The Cuckoo’s Boys (Reed (SF), Ames DVD 813 Ree). He won the Hugo Award for Best Novella, for “A Billion Eyes,” in Asimov’s Science Fiction, Oct./Nov. 2006.

Thursday, March 16, 2006 — Susanne George Bloomfield, professor and author
Susanne Bloomfield holds the Martin Distinguished Professorship at the University of Nebraska – Kearney. She writes poetry that has been published in a variety of formats. And she edits the Platte Valley Review. She writes biographies; one of her favorites being Impertinences: Selected Writings of Elia Peattie, Journalist in the Gilded Age (070.92 Pea, book/DVD). Recently edited: Adventures in the West: Stories for Young Readers (j813.08 Geo)

Thursday, April 20, 2006 — Ladette Randolph, author and editor at UN Press
Ladette Randolph is an executive editor at the UN Press. An award winner, Ladette’s short fiction and essays have been published in various journals. Not long ago, she edited the anthology, A Different Plain: Contemporary Nebraska Fiction Writers (813.08 Ran). And she is a writer; her book of short stories, This is Not the Tropics (Fic Ran), appeared recently.

Thursday, September 21, 2006 — Joy Carol, Author, Speaker, and Counselor
Joy Carol grew up in Nebraska, living on a farm between Clatonia and Hallam. After a move to Lincoln, she attended Northeast High and NE Wesleyan University. Since leaving Nebraska, it would seem that her varied life experiences have led to her interest in “real people who may have gone through difficult times and have transformed their lives.” Her books include: The Fabric of Friendship: Celebrating the Joys, Mending the Tears in Women’s Relationships (305.4 Car, book/DVD); and Towers of Hope: Stories to Help Us Heal and Journeys of Courage: Remarkable Stories of the Healing Power of Community (291.4 Car).

Thursday, October 19, 2006 — Alex (Sharon) Kava, Author and Mystery Writer
Growing up, Alex practiced being a writer. After graduating from the College of Saint Mary in Omaha and performing a number of different jobs, she did take the chance, dedicating more time to writing and hoping to realize her dream of becoming a published author. Her titles thus far include: A Perfect Evil, Split Second, Soul Catcher, At the Stroke of Madness, One False Move, and A Necessary Evil. Her One False Move was chosen as the 2006 One Book One Nebraska selection. (Fic Kav – BMPL books/DVD)

Thursday, November 16, 2006 — Bill Kloefkorn, poet, and Carlos Frey, artist
Both Bill Kloefkorn and Carlos Frey have Kansas connections; both moved to Nebraska a number of years ago, to Lincoln and Wayne. Both are artists; Carlos expresses his art through painting and Bill shares his art through poetry. He was named the Nebraska State Poet by the Unicameral in 1982, has written a number of books, and has worked extensively with children in the schools. They recently collaborated on a book, Still Life Moving (811 Fre, book/DVD). Kloefkorn’s work also appears in Nebraska Presence (811.08 Kos), and his book, Restoring the Burnt Child, is the 2008 One Book One Nebraska selection. (B K69)

Thursday, January 18, 2007 — Kelly Madigan Erlandson, poet and essayist
Kelly was born in Massachusetts but has lived in Lincoln since 1980. She has won several awards. Her poems and essays have been published in a number of journals; her work has also been included in two anthologies, Times of Sorrow/Times of Grace (810.82 Sai) and Crazy Woman Creek (810.098 Has). In 2006, Kelly received the Distinguished Artist Award from the Nebraska Arts Council. Also: Getting Sober (362.292 Erl) and Born in the House of Love (811 Erl, book/DVD). Kelly’s work also appears in Nebraska Presence (811.08 Kos)

Thursday, Feb.15, 2007 and Feb. 21, 2008 — Rajean Luebs Shepherd, children’s author
Originally from Michigan, Rajean moved to North Platte in 1994. Trained as an educator and now working as a substitute teacher, she enjoys sharing children’s books with her students. She is the author of C is for Cornhusker: A Nebraska Alphabet (j917.82 She) (813 She – DVD)

Thursday, April 19, 2007 — Ladette Randolph, ed., John Price, Lisa Knopp, Joe Starita
Ladette, Associate Director for Development at UN Press, has edited an anthology, The Big Empty: Contemporary Nebraska Nonfiction Writers, (810.098 Ran), a companion volume to A Different Plain: Contemporary Nebraska Fiction Writers (813.08 Ran) that was published in 2004. Ladette joined us along with John, Lisa, and Joe whose writings are excerpted in The Big Empty. Books discussed included: This is Not the Tropics by Ladette Randolph (Fic Ran) Not Just Any Land by John Price, e-book Nature of Home by Lisa Knopp (917.82 Kno) The Dull Knives of Pine Ridge by Joe Starita (970.2 DulYs, book and video) also The Fans of Memorial Stadium: A Day in the Life by Joe Starita (796.332 qSta)

Thursday, September 20, 2007 — Twyla Hansen and Paul Johnsgard, naturalists
Among their many literary accomplishments, Lincolnites Twyla and Paul have recently collaborated on a collection of 26 prairie poems and 28 associated drawings entitled Prairie Suite: A Celebration; the book was written to support Spring Creek Prairie. (811 Han, book/DVD). Twyla is also in Nebraska Presence (811.08 Kos). Another recent release from Paul Johnsgard is Crane Song (DVD 598.32 Cra)

Thursday, October 18, 2007 — Charlotte Hogg, Professor
While Charlotte now lives in Texas, she grew up in Paxton, Nebraska. She recently published a book with the University of Nebraska Press, From the Garden Club: Rural Women Writing Community, featuring women, including her grandmother, and the writing they do in Paxton. (307.72 Hog, book/DVD)

Thursday, November 15, 2007 — Greg Kosmicki, poet, editor, publisher, social worker
Greg, a poet and social worker from Omaha, has written a number of books including The Patron Saint of Lost and Found, (811 Kos) Some Hero of the Past, (811 Kos) We Have Always Been Coming to This Morning, (811 Kos). He also appears in Nebraska Presence (811.08 Kos) and Times of Sorrow/Times of Grace (810.82 Sai)

Thursday, February 21, 2008 — Rajean Luebs Shepherd, children’s author
Rajean Shepherd, who lives in North Platte, is the author of Husker Numbers: A Nebraska Number Book, (j917.82 She) a companion volume to her popular alphabet book for all ages, C is for Cornhusker: A Nebraska Alphabet, (j917.82 She)

Thursday, March 20, 2008 — Ted Kooser, poet
One of the original founders of the Nebraska Literary Heritage Association and supporters of the Jane Pope Geske Heritage Room of Nebraska Authors, Ted Kooser joins us again after his two year stint as Poet Laureate of the United States, Oct. 2004 – May 2006. The libraries own many of Ted’s books, found under 811 Koo. One interesting recent addition is Ted Kooser’s Poetic World (DVD 811.08 Koo). Ted’s work is also included in Nebraska Presence (811.08 Kos)