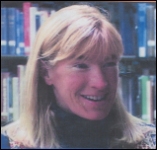 A list of works by Nebraska mystery author
Julie Kaewert

Author Julie Wallin Kaewert was born in Nebraska — her great-grandparents were homesteaders in the Swedeburg and Millard areas. Kaewert grew up in Omaha, attending Swanson school and Westside High School. While pursuing a degree at Dartmouth, her graduate thesis was on Nebraska author Willa Cather.

Kaewert first indulged her fascination with book publishing by taking the Radcliffe Publishing Procedures Course in 1981. Having graduated from both Dartmouth and Harvard, Kaewert worked for book publishers in Boston and Bedford Square (London) before beginning her writing career with a London magazine. She is the author of the Booklover’s Mysteries series (set in London), featuring Alex Plumtree and Plumtree Press, which have topped mystery bestseller lists around the country. Though her series is set in London, Kaewert says it’ll never sell in England because she writes characters that have a sense of hopefulness and optimism, while British reading tastes run towards the darker and pessimistic side. She still harbors a desire to write her “great American novel” featuring the type of “sense of place” that Willa Cather was able to perfect. She currently lives in Boulder, Colorado, with her husband and two daughters.

(Additional information about Julie Kaewert can be found at the following Web site:)

Adaptation of the 1998 feature film, starring Ralph Fiennes and Uma Thurman, based on the classic 1960s British television show, starring Patrick Macnee and Diana Rigg (among others).