Catch Me If You Can

A booklist for: Catch Me If You Can

This is a booklist created by Gere Branch library staff to accompany the stage production of Catch Me If You Can at Gere’s neighbor, The Lincoln Community Playhouse.

The stage musical Catch Me If You Can has a score by Marc Shaiman and Scott Wittman, with a libretto by Terrence McNally. It is primarily an adaptation of the 2002 feature film of the same name, which starred Tom Hanks and Leonardo DiCaprio. Both the film and the musical follow the life story of a con man named Frank Abagnale Jr., as he told it in his 1980 autobiography Catch Me If You Can. After a 2009 tryout in Seattle, the musical opened on Broadway in 2011, and ran for 32 previews and 170 regular performances. A touring company version traveled the U.S. in 2012 and 2013. Abagnale was a gutsy chameleon, able to take on new roles and new lives with almost no preparation. He managed to stay a few steps ahead of government agents who were pursuing him, for several years, before finally being caught by FBI Agent Carl Hanratty. The film and musical tell of Abagnale’s adventures and scams while on the run, and try to explore the reasons he might have slipped into the life of a con man with such ease.

Then We Take Berlin
by John Lawton [Lawton] 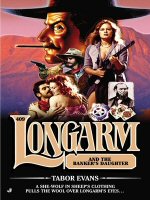 Longarm and the Banker’s Daughter
by Tabor Evans [PB Evans]

Longarm has tangled with some dirty double-crossers in his day, but the luscious Lacy Sackett may be the dirtiest of them all. She’s used her feminine wiles to hoodwink a long list of men—her banker father, the outlaws who’ve robbed her father’s bank, clueless cavalry Captain Dickie Shafter, and even U.S. Deputy Marshal Custis Long.

The lawman is determined to bring in the curvaceous catamount—no matter how many scratches he gets—and recover the loot she’s hidden from her partners in crime. But until he’s turned her in, he’d better not turn his back on her….

Former con artist and Harvard Law student Mike Ford accepts a position with the DC-based Davies Group, a consulting firm whose specialty is pulling strings for the five hundred most powerful people inside the Beltway.

The Book Thief: The True Crimes of Daniel Spiegelman
by Travis McDade [025.82 McD] 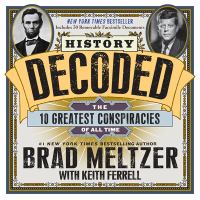 History Decoded: The 10 Greatest Conspiracies of All Time
by Brad Meltzer [364.1 Mel]

A book inspired by the History Network show explores unexplained mysteries, including what the government is hiding in Area 51, and what happened to the Confederacy’s nineteen million dollars in gold and silver at the end of the Civil War.

The Great Heist: [The Story of the Biggest Bank Robbery in History…and Why the Money Was Returned.]
by Jeff McArthur [364.155 McA]

On a sunny September morning in 1930, six men entered the Lincoln National Bank in Nebraska’s capital city armed with revolvers and Thompson submachine guns. In eight minutes they emerged with more than 2.7 million dollars, the largest take of any bank heist in history. A nationwide search for the bandits would lead Nebraska authorities through the rough, gangland streets of Chicago and East St. Louis, and deep into the heart of the Capone organization. The Great Heist not only chronicles the search for the bandits and the trials that followed, but the incredible story of how they got the money back.

Danny Ocean like his chances. All he asks is that his handpicked squad of 10 grifters and cons play the game like they have nothing to lose. If all goes right, the payoff will be a fat $150 million. All the gang of associates needs to do is stage heists at three major Las Vegas casinos – Bellagio, The Mirage, and the MGM Grand – simultaneously during a popular boxing event. The payoff, divided by 11, you do the math.

They are formidable enemies in their own rights: a French scientist, an American millionaire, a brilliant Chinese gentleman, and a master of disguise. But together they are the Big Four, a partnership with one simple goal, murder. Hercule Poirot has never come up against an opponent so vicious, or so deadly.

When troubled beauty Alicia Huberman is recruited by American agent T.R. Devlin to infiltrate a German spy ring in postwar Rio, she accepts. When she receives orders to seduce a Nazi kingpin, Alicia must sacrifice the only happiness she’s ever known for a perilous mission that could ultimately cost her and Devlin their lives.

Academy Award winner Matt Damon stars in this explosive, action-packed hit filled with incredible fight sequences. Found with two bullets in his back, Jason Bourne discovers he has the skills of a very dangerous man and no memory of his violent past. Racing to unlock the secret of his own identity, he discovers the deadly truth: he’s an elite government agent, a 30 million dollar weapon the government no longer trusts. Now this top operative is the government’s number one target in this super-charged, thrill-a-minute spectacular loaded with “non-stop action!”.

Young Maura Conlon’s dad is a secret agent. And she knows what that means: chasing cars, jumping over buildings, handcuffing bad guys, just like on “The FBI,” her favorite TV show. No matter how many times she asks her father about his work, he never says anything. So Maura decides to become an FBI girl-in-training. A heartwarming tale of a father/daughter relationship, this is about family bonds, the trials that test them, and the triumphs that make them stronger.

Stalling for Time: My Life as an FBI Hostage Negotiator
by Gary Noesner [364.154 Noe]

In Stalling for Time, the head of the FBI’s groundbreaking Crisis Negotiation Unit takes readers on a heart-pounding tour through many of the most famous hostage crises of the past thirty years. Specially trained in non-violent confrontation and communication techniques, Noesner’s unit successfully defused many potentially volatile standoffs, but perhaps their most hard-won victory was earning the recognition and respect of their law enforcement peers.