A booklist for: Charlotte’s Web

This is a booklist created by Gere Branch library staff to accompany the stage production of Charlotte’s Web at Gere’s neighbor, The Lincoln Community Playhouse.

Charlotte’s Web is a stage musical, adapted from the classic E.B. White children’s novel, with music and lyrics by Charles Strouse and book by Joseph Robinette. The Children’s Literature Association named this “the best American children’s book of the past two hundred years,” and Joseph Robinette, working with the advice of E.B. White, has created a play that captures this work in a thrilling and utterly practical theatrical presentation. The costumes and unit set may be simple or as colorful and elaborate as you wish; it’s the story and relationships that make the show. All the enchanting characters are here: Wilbur, the irresistible young pig who desperately wants to avoid the butcher; Fern, a girl who understands what animals say to each other; Templeton, the gluttonous rat who can occasionally be talked into a good deed; the Zuckerman family; the Arables; and, most of all, the extraordinary spider, Charlotte, who proves to be “a true friend and a good writer.” Determined to save Wilbur, Charlotte begins her campaign with the “miracle” of her web in which she writes, “Some pig.” It’s the beginning of a victorious campaign which ultimately ends with the now-safe Wilbur doing what is most important to Charlotte.

This beloved book by E. B. White, author of Stuart Little and The Trumpet of the Swan, is a classic of children’s literature that is “just about perfect.” This hardcover edition includes a foreword by two-time Newbery winning author Kate DiCamillo.

Some Pig. Humble. Radiant. These are the words in Charlotte’s Web, high up in Zuckerman’s barn. Charlotte’s spiderweb tells of her feelings for a little pig named Wilbur, who simply wants a friend. They also express the love of a girl named Fern, who saved Wilbur’s life when he was born the runt of his litter.

E.B. White’s Newbery Honor Book is a tender novel of friendship, love, life, and death that will continue to be enjoyed by generations to come. It contains illustrations by Garth Williams, the acclaimed illustrator of E. B. White’s Stuart Little and Laura Ingalls Wilder’s Little House series, among many other books.

Get ready for farm-fresh fun and laughter with Shaun the Sheep and his barnyard buddies, as they set the scene for more mayhem on the farm. Laugh out loud as Shaun tries to outfox a fox, Bitzer discovers his jazzy side, and the sheep try to sell everything on the farm to the highest bidder. 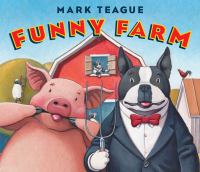 Cousin Edward visits Aunt Judy and Uncle Earl on their farm and tries to help with all of the chores. 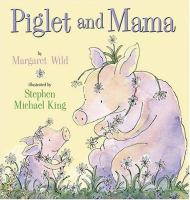 When Piglet cannot find her mother, all of the barnyard animals try to make her feel better, but Piglet wants nothing but Mama.

The Adventures of Milo and Otis
[DVD j Adventures]

A young cat and dog discover the dangers and delights of the outside world when they wander away from the farm.

While the chickens on Mrs. Tweedy’s farm dream of a better life, a clever hen named Ginger is hatching plans to fly the coop for good. The only problem is, chickens can’t fly, or can they? 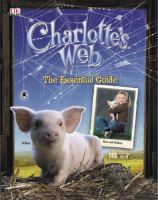 A comprehensive look at the film that includes character pictures and scenes from the movie.

The Story of Charlotte’s Web : E.B. White’s Eccentric Life in Nature and the Birth of an American Classic
by Michael Sims [Biography White]

As he was composing what was to become his most enduring book, E. B. White was obeying the maxim: “Write what you know.” Helpless pigs, silly geese, clever spiders, greedy rats — White knew all of these characters in the barns and stables where he spent his favorite hours.

Some Pig!: A Charlotte’s Web Picture Book
by E. B. White [jP White]

Relates the special relationship between a young girl named Fern and Wilbur, the spring pig she raises and loves.

A piglet destined for eventual butchering arrives at the farmyard, is adopted by an old sheep dog, and discovers a special secret to success.