A booklist for: Erma Bombeck: At Wit’s End

This is a booklist created by Gere Branch library staff to accompany the stage production of Erma Bombeck: At Wit’s End at Gere’s neighbor, The Lincoln Community Playhouse.

Erma Bombeck: At Wit’s End is a one-hour, one-woman stage show, first released in script form in 2016, which taps into the many columns and essays collections put out by writer Erma Bombeck from the mid-1960s to her death in 1996. From the writers of the smash hit Red Hot Patriot: The Kick-Ass Wit of Molly Ivins (Allison and Margaret Engel) comes a comic look at one of our country’s most beloved voices, who captured the frustrations of her generation by asking, “If life is a bowl of cherries, what am I doing in the pits?” Discover the story behind America’s beloved humorist who championed women’s lives with wit that sprang from the most unexpected place of all – the truth. 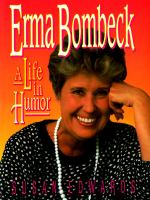 A treasure trove of Erma Bombeck’s humor, set alongside the story of her career, her family, and her inspiring battle with cancer and kidney disease.A housewife turned humorist, Erma Bombeck delighted America with a wry humor that turned everyday annoyances-into familiar and funny anecdotes that won places of honor on America’s refrigerators. Here is Erma Bombeck, laughing her way through childhood, marriage, motherhood, and celebrity status, even keeping her sense of humor as she battled terminal illness.

Quintessentially Erma, this book turns Bombeck’s trademark sense of humor to her favorite subject, human behavior, offering a wise and witty take on the surprising similarities between the animal world and us.

When You Look Like Your Passport Photo, It’s Time to Go Home
by Erma Bombeck [817 Bom]

Here is a feast of the wit and wisdom of Erma Bombeck. Includes The Grass Is Always Greener Over the Septic Tank, If Life Is a Bowl of Cherries–What Am I Doing in the Pits?, Aunt Erma’s Cope Book and Motherhood: The Second Oldest Profession.

In this book Erma comes out–out of the kitchen–with these gems: No longer will she be the only woman on the block to wear a slip under a see-through sweater, or feel guilty if the sun sets on an empty crockpot, nor will she care that she flunked her paper towel test. Our Erma is on her way to becoming a sub-total woman.

Readers around the world loved Erma Bombeck and cherished every one of her columns. Forever Erma, a collection of columns dating from her first in January 1965 to her last in April 1996, also includes a tribute chapter with remembrances from some of Erma’s family, friends and colleagues, and will give fans a classic way to hold on to this most gifted writer.

A Marriage Made in Heaven — Or, Too Tired For an Affair
by Erma Bombeck [817 Bom]

In this lovingly hilarious look at her 44-years-and-counting marriage to a man she wouldn’t trade for anything in the world — who would finish her sentences? — Erma Bombeck offers observations as only she can.

Family: The Ties That Bind…and Gag!
by Erma Bombeck [817 Bom]

Collection of newspaper humor columns about how everyday life can often go awry, by writer Margery Eliscu, whose weekly column “Coffee Break” appeared in the Main Sunday Telegram. In her own words: “I just wanted to show dear Russell and Erma how anybody, no matter where he or she is, can find the material for humor.”

Known for her realistic, humorous books, Erma Harris Bombeck wrote about ordinary, everyday events and problems. As a dedicated mother, she used her experiences raising children as a rich and vital source of her material. Her sense of humor and her appreciation for life made her successful in print, radio, and TV.

Bombeck was born in 1927. In 1949, she began her career as a reporter for the Journal Herald in Dayton, Ohio. From 1975 to 1986, Bombeck appeared as a biweekly commentator on the Good Morning America television show.