How I Became a Pirate

A booklist for: How I Became a Pirate

This is a booklist created by Gere Branch library staff to accompany the stage production of How I Became a Pirate at Gere’s neighbor, The Lincoln Community Playhouse.

How I Became a Pirate is a stage musical for a youth cast, with book, lyrics and music by Janet Yates Vogt and Mark Friedman, adapted from the beloved children’s picture book by Melinda Long and David Shannon. Sail off on a fantastic musical excursion when a band of comical pirates lands at North Beach looking for an expert digger to join their crew. Braid Beard and his mates enlist young Jeremy Jacob, as they try to find the perfect spot to bury their treasure. Jeremy finds that adventuring can be lots of fun, but also learns that love and home are treasures you can’t find on any map! The whole family will love this delightful and swashbuckling musical adventure!

Reading and Viewing Recommendations for fans of How I Became a Pirate: 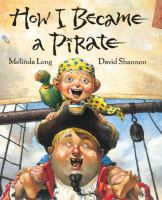 How I Became a Pirate
by Melinda Long [jP Long]

Pirates have green teeth—when they have any teeth at all. I know about pirates, because one day, when I was at the beach building a sand castle and minding my own business, a pirate ship sailed into view.
So proclaims Jeremy Jacob, a boy who joins Captain Braid Beard and his crew in this witty look at the finer points of pirate life by the Caldecott Honor–winning illustrator David Shannon and the storyteller Melinda Long. Jeremy learns how to say “scurvy dog,” sing sea chanteys, and throw food . . . but he also learns that there are no books or good night kisses on board: “Pirates don’t tuck.” A swashbuckling adventure with fantastically silly, richly textured illustrations. 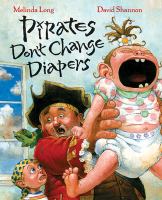 Braid Beard and his pirate crew return to retrieve the treasure they buried in Jeremy Jacob’s backyard, but first they must help calm his baby sister, Bonney Anne, whom they awoke from her nap. 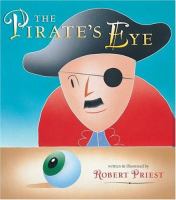 When Captain Black the pirate loses his glass eye, a pauper finds it and creates a book from images of the captain’s experiences that he sees within it, resulting in a change in both their lives. 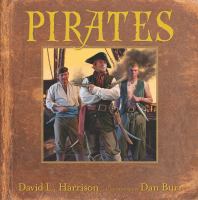 Glamorous, swashbuckling, daring adventurers? Pirates have had good publicity for a long time. But they were really a bunch of misfits, thugs, and ne’er-do-wells who spent most of their time bored, waiting for a few moments of excitement and rich booty that could very well get them wounded or killed, or captured and executed. Still, a pirate’s life was chosen by many, and this poetry collection describes the highs and lows and everything in between for those who swore the oath of the Brotherhood.

Wilson is one of the most bullied fourth-graders at the chaotic Very Elementary School until his long-lost uncle, Desperate Evil Wicked Bob–a pirate–and his talking penguin arrive and begin making everything ship-shape, one classroom at a time.

The Giant Rat of Sumatra: Or, Pirates Galore
by Sid Fleischman [j Fleischman]

A cabin boy on a pirate ship finds himself in San Diego in 1846 as war breaks out between the United States and Mexico.

Pirates!
by Celia Rees [j Rees] (no longer in the libraries’ collection)

In 1722, after arriving with her brother at the family’s Jamaican plantation where she is to be married off, sixteen-year-old Nancy Kington escapes with her slave friend, Minerva Sharpe, and together they become pirates traveling the world in search of treasure.

Pirates: A Nonfiction Companion to Pirates Past Noon
by Will Osborne & Mary Pope Osborne [j910.45 Osb]

What were pirates really like? How did people become pirates? Where did pirates bury their treasure? Dig up the answers to these questions and more. Includes information on pirate flags, pirate treasure, real-life pirates, walking the plank, and much more! 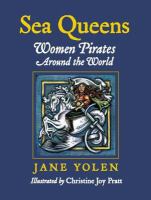 Throughout the ages, women from all classes and walks of life turned to pirating out of necessity, desperation, or greed. Acclaimed author Jane Yolen examines the contradictions of these bold women’s lives and times. Meet Artemisia, the admiral-queen of Persia in 500 BC; Grania O’Malley, the Irish “pirate queen” who challenged Queen Elizabeth I’s British ships; Madame Ching, who sailed the South China Sea in the early 1800s; and then other female pirates on their ships, in battle, and in disguise. 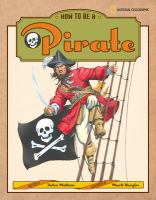 The year is 1680, and once you sign on to the ship, there’s no turning back. You’ll need to learn new skills, like tying knots, rowing, and sword fighting. You’ll be taught how to pump out the bilge and repair torn sails. But most of all, you’ll want to capture ships and seize their treasure. Be ready to answer questions during your job interview at the end of the book. Answer most of them right, and you’ll get the job! 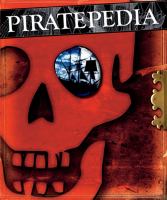 Designed as a hip time-travel journal into the pirate past, this compendium of the sea scoundrel’s world includes all the detail of classic DK reference as well as excerpts from favorite piratical fiction, making Piratepedia a swashbuckling volume kids won’t want to walk the plank without! 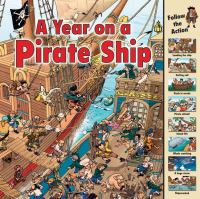 Ahoy, mates! Would you like to know what life is like on a pirate ship? Then come live on board for the next twelve months. Check out these eight action-packed scenes for a bird’s-eye view of the life and work of pirates on the open seas. See how the pirates attack a ship, deal with a whale, and handle a storm. Keep your eye on the calendar too. By spending a whole year with the pirate crew, you can watch events unfold as the seasons change.

This time Pippi’s adventures take her to the exciting South Seas. Among other things, she must deal with a band of pirates.

Splash into action with seafaring sleuths Scooby-Doo and the Mystery, Inc. gang as they collide with a mystery ship and try to uncover clues from a vanished crew in Hassle in the Castle! Shaggy and Scooby-Doo are then captured by Redbeard the Pirate in Go Away Ghost Ship. Zoinks! If the case isn’t solved soon, somebody’s going to walk the plank!