A booklist for: Junie B. Jones’s Jingle Bells, Batman Smells

This is a booklist created by Gere Branch library staff to accompany the youth stage production of Junie B. Jones’s Jingle Bells, Batman Smells at Gere’s neighbor, The Lincoln Community Playhouse.

Junie B. Jones’s Jingle Bells, Batman Smells is a stage adaptation of Barbara Park’s novel, Junie B. Jones, First Grader: Jingle Bells, Batman Smells! (P.S. So Does May). Junie B. Jones, First-Grader, is super-excited about the upcoming Holiday Sing-Along and Secret Santa gift exchange at her school. Too bad tattletale May keeps ruining all of Junie B.’s fun. So when Junie B. draws May’s name for Secret Santa, she comes up with the perfect plan to teach her nemesis a lesson! But will the Christmas spirit of peace and goodwill interfere before she can give you-know-who what she deserves? A hilarious and endearing tale based on the best-selling book series.

In the 25th Junie B. Jones book, it’s holiday time, and Room One is doing lots of fun things to celebrate. Like making elf costumes! And singing joyful songs! Only, how can Junie B. enjoy the festivities when Tattletale May keeps ruining her holiday glee? And here is the worst part of all! When everyone picks names for Secret Santa, Junie B. gets stuck with Tattletale you-know-who! It’s enough to fizzle your holiday spirit! Hmm . . . or is it? Maybe, just maybe, a Secret Santa gift is the perfect opportunity to give May exactly what she deserves…

Please Write In This Book
by Mary Amato [j Amato]

When Ms. Wurtz leaves a blank book in the Writer’s Corner with a note encouraging those who find it to “talk to each other” in its pages, the student’s entries spark a classroom-wide battle.

Four fifth-grade students–a geek, a class clown, a teacher’s pet, and a slacker–as well as their teacher and mothers, each relate events surrounding a computer programmed to complete homework assignments.

Having never excelled at schoolwork, twelve-year-old Anna discovers that she may know a few things about survival when the 1888 Children’s Blizzard traps her and her classmates in their Nebraska schoolhouse.

When the President finds the many pressures of his job to be overwhelming, he disguises himself and returns to kindergarten, where he’s reminded of the important lessons he learned there.

When Destiny Washington cannot think of a discovery during Discovery Week at school, she makes up a story, but finds that she cannot keep on pretending it is true.

I Know an Old Teacher
by Anne Bowen [jP Bowen]

In this take on the well-known cumulative rhyme, a teacher inadvertently swallows a flea, then follows it with an assortment of classroom pets while her students look on in surprise. 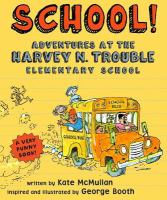 This heavily illustrated, full-color, fabulously designed young chapter book is a must-have, back-to-school title that chronicles the very simple story of Ron Faster—as he learns some important lessons about life—during his adventures on a Monday, Tuesday, Wednesday, Thursday, and Friday in a most unusual school.

Wayside School is Falling Down
by Louis Sachar [j Sachar]

There are 29 kids in Mrs. Jewls’s class and this book is about all of them. There is Todd, who got in trouble every day … until he got a magic dog; Paul, whose life was saved by Leslie’s pigtails; Ron, who dared to try the cafeteria’s Mushroom Surprise and all the others who help turn a day at Wayside School into one madcap adventure after another. 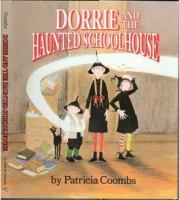 Dorrie and the Haunted Schoolhouse
by Patricia Coombs [jP Coombs]

In the absence of their professor, Dorrie and her friend Dither (who are both witches) whip up a concoction scribbled on the blackboard and find themselves and their school airborne.

Horrible Harry and the Holidaze
by Suzy Kline [jC Kline]

Harry and his classmates in Room 3B have some important holiday celebrating to do-and they’re talking about more than Christmas! Hanukkah, Kwanzaa, Three Kings’ Day, and the Korean New Year are holidays that some of the students celebrate, and Miss Mackle wants everyone to learn about them. All of the kids are excited-except Harry. He’s not interested in holidays, ZuZu-the new student-or even the new class guinea pig. What’s bothering Harry? Will he be able to get in the holiday spirit after all?