A booklist for: Mamma Mia!

This is a booklist created by Gere Branch library staff to accompany the stage production of Mamma Mia! at Gere’s neighbor, The Lincoln Community Playhouse.

Mamma Mia! is a stage musical based on the music of Swedish Pop band ABBA. The musical builds a story around several of ABBA’s greatest hits, including “Super Trouper”, “Lay All Your Love on Me”, “Dancing Queen”, “Knowing Me, Knowing You”, “Take a Chance on Me”, “Thank You for the Music”, “Money, Money, Money”, “The Winner Takes It All”, “Voulez-Vous”, “SOS”, and particularly the 1975 hit, “Mamma Mia!”, that gives the musical its name. The story involves 20-year-old Sophie preparing to marry her fiance on an island off of Greece, and wanting her father to walk her down the aisle. But her mother won’t tell her who her father is, so she invites all three of the possible men, who might be her father, to come to the wedding. Confusion, awkward reunions, emotional revelations and a whole lot of singing ensue.

See a shorter version of this list, provided to the Playhouse website, including a word puzzle using the themes of Mamma Mia!

Fans of the heartfelt comedy and smash musical numbers in Mamma Mia! may enjoy the following movies in the libraries’ collection:

Romantic Comedies about engagements and weddings on DVD

An Indian-American man who is about to turn 30 gets help from his parents and extended family to start looking for a wife in the traditional Indian way.

Pledging to keep herself from being the oldest and the only woman in her entire family never to wed, Montana embarks on a thirty-day, thirty-thousand-mile expedition to charm a potential suitor into becoming her fiancé.

Robbie, a singer, and Julia, a waitress, are both engaged, but to the wrong people. Fortune intervenes to help them discover each other. 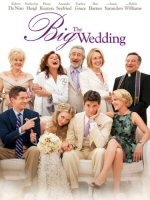 A long-divorced couple fakes being married as their family unites for a wedding.

Before You Say I Do
directed by Paul Fox, starring David Sutcliffe, Jennifer Westfeldt, etc. [DVD Before]

George Murray’s fiancée Jane Gardner gets cold feet after accepting his ring, terrorized by her first wedding with Doug, who cheated that very day with their wedding coordinator. A twist of fate sends George back in time to a point where he could save his fiancee’s first wedding.

George Murray’s fiancée Jane Gardner gets cold feet after accepting his ring, terrorized by her first wedding with Doug, who cheated that very day with their wedding coordinator. A twist of fate sends George back in time to a point where he could save his fiancee’s first wedding.

The story of a bride-to-be trying to find her real father told using hit songs by the popular 1970s group ABBA.

Confidence artist Harold Hill poses as a boys’ band leader to con naive Iowa townsfolk, only to find himself falling for the earnest and strong-willed Marian the librarian.

This is the film version of the Pulitzer and Tony Award winning musical about Bohemians in the East Village of New York City struggling with life, love and AIDS, and the impacts they have on America.

An impromptu fashion shoot at a book store brings about a new fashion model discovery in the shop clerk.

Pleasantly plump teenager Tracy Turnblad teaches 1962 Baltimore a thing or two about integration after landing a spot on a local TV dance show.

Spending the summer at a Catskills resort with her family, Frances “Baby” Houseman falls in love with the camp’s dance instructor, Johnny Castle.