A booklist for: Oklahoma!

This is a booklist created by Gere Branch library staff to accompany the stage production of Oklahoma! at Gere’s neighbor, The Lincoln Community Playhouse.

Oklahoma! was the very first Broadway musical collaboration between composer Richard Rodgers and playwright/lyricist Oscar Hammerstein II. It premiered on Broadway in 1943 and was based on the non-musical stage play Green Grow the Lilacs, by Lynn Riggs (1931). Set in Oklahoma’s Indian territory, the central focus of the story is on the romance between cowboy Curley McLain and farmgirl Laurey Williams, with a secondary romance plot about Curley’s fellow cowboy, Will Parker, and his agressively flirtatious fiancee, Ado Annie. Oklahoma! is one of the most successful stage musicals of all time, having run over 2,000 performances on Broadway, been turned into a movie, and having become a staple production for colleges, high schools and community theaters not only across the United States, but around the world.

Some of the most famous showtunes in Broadway history came out of this show, including: “Oh, What a Beautiful Mornin'”, “Surrey With the Fringe on Top”, “Kansas City”, “I Cain’t Say No”, “People Will Say We’re in Love”, “The Farmer and the Cowman”, and, of course, the unforgettable titular song, “Oklahoma!”

Women of the Frontier: 16 Tales of Trailblazing Homesteaders, Entrepreneurs and Rabbl-Rousers
by Brandon Marie Miller [978.1 Mil]

Using journal entries, letters home, and song lyrics, the women of the West speak for themselves in these tales of courage, enduring spirit, and adventure. Women such as Amelia Stewart Knight traveling on the Oregon Trail, homesteader Miriam Colt, entrepreneur Clara Brown, army wife Frances Grummond, actress Adah Isaacs Menken, naturalist Martha Maxwell, missionary Narcissa Whitman, and political activist Mary Lease are introduced to readers through their harrowing stories of journeying across the plains and mountains to unknown land. Recounting the impact pioneers had on those who were already living in the region as well as how they adapted to their new lives and the rugged, often dangerous landscape, this exploration also offers resources for further study and reveals how these influential women tamed the Wild West.

A nationwide bestseller—with more than 65,000 copies in print since publication by Alfred A. Knopf in 1981, this fascinating chronicle of cowboy life and legend is now available in a trade paperback edition. It’s the 500-year saga of the “real cowboy”—from fifteenth-century Mexico to the twentieth-century American West.

Right after the Civil War, Texas cattlemen drove cattle north to feed the developing north and to stock the vast new ranches. The greatest of these cattle trails was a trail that came out of south Texas toward Dodge City, Kansas, on to Ogallala, Nebraska, and as far north as Canada. In twelve seasons it carried over six million longhorns. It became known, for the most part, as the Western. Now for the first time, based on stories and memories of homesteaders and cowboys and other documentation, the authors tell the history of the Trail and show through detailed maps the exact cattle routes of the Western Trail.

Covering the period of westward expansion, from 1860 to 1900, an extensively illustrated history describes the settlers, miners, and others who ventured west to seek new lives, capturing the cowboys, gold-seekers, lawmen, outlaws, railroad builders, and others who transformed the American frontier.

A Harvard graduate, turned federal Marshal in Wyoming, learns of a government sanctioned plot by cattle barons to kill the area’s European settlers for their land. The resulting battle is based on the Johnson County War of 1892.

During the nineteenth and early twentieth centuries, immigrants from Spain, Sweden, Ireland, Italy, Germany, England, and other European countries settled all across the American West. This collection of essays explores the rural and urban settlement patterns of these groups, their comparative histories, and the maintenance of their communities. Europeans came to the West from all directions via both coasts and Mexico. Luebke provides tables illustrating the distribution of foreign-born persons in the West and first- and second-generation immigrants by country of origin in the region.

Miles City, Montana. 1885. Barnaby Skye’s mixed-blood son, Dirk, has just married a beautiful Metis girl, Therese. But Dirk’s position as a civilian translator for the U.S. army threatens to shatter their union. Montana ranchers wrestling with livestock theft and the incursion of settlers into their range have persuaded the army to send the Metis people back to Canada. The military enlists Dirk to translate between the two sides in the brutal campaign. Unable to reconcile her love for Dirk with the pain he is inflicting on her people, Therese flees on their wedding night. Heartbroken, Dirk rides off with the army. Therese has a powerful vision. She is inspired to build a church that will be a gathering place for her people and a symbol of their resistance to deportation. The suffering refugees–driven into the wilderness by Yankee soldiers and cruel ranch vigilante gangs–find a friend in Dirk and an inspiration in Therese. In their common cause, the lovers are reunited.

Wide as the continent and wild as the West, Paint the Wind is the epic saga of one unforgettable woman and the three strong men who risk everything to possess her. 1864. A plantation is ravaged by border raiders. Ten-year-old Fancy Deverell is saved by a wise old slave named Atticus, who sets her on an extraordinary journey that will lead her headlong into the rough-and-tumble days of the Old West. From a westering circus train to the gold and silver fields of Colorado, from the cutthroat world of the New York Stage and the arcane shadows of magic and mysticism to the last legendary and tragic struggles of Geronimo and the Apache Nation, the novel sweeps along with the relentless rhythm of those turbulent times….

In this, the seventh novel in Kelton’s acclaimed Texas Ranger series, former Texas Ranger Andy Pickard (“Badger Boy” as he was known as a youth living among Comanches), leaves his fiancée’s farm in north central Texas. He begins to track the man, Luther Cordell, who he believes killed his friend, Sheriff Tom Blessing. Pickard is mistaken. But although Cordell did not kill Blessing, the robber-ringleader must be brought to Ranger justice and the rest sorted out later.

Secrets on the Wind
by Stephanie Grace Whitson [Whitson]

Witness the miracle as treasures of darkness are brought to light. It seems to be a typical US Army post in 1878. But in the midst of the regimented daily routine… a grieving sergeant harbors bitterness and guilt in his broken heart, … a desperate young woman struggles to recover from the trauma inflicted by unimaginable circumstances, … a new recruit with a changed identity seeks to escape the mistakes of his past, and among them, a woman feels called to embrace these people in need and the secrets that cripple them. 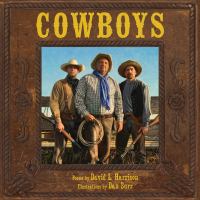 The life of a cowboy driving a cattle herd was hard. It took a person with grit to drive a thousand head of longhorns along the Chisholm Trail. Cowboys faced badlands, lightning storms, and deadly twisters. But they also found time to swap stories around the campfire. David L. Harrison has created a cast of tough-as-leather cowboys who speak their minds in twenty-two entertaining poems, brought to life by Dan Burr’s dramatic paintings. Readers follow the cowboys from roundup on a ranch in Texas to the one-thousand-mile trek to market in Abilene, Kansas, where they finally let loose.

This Newbery Medal–winning book is the first of five books in Patricia MacLachlan’s chapter book series about the Witting family. Set in the late nineteenth century and told from young Anna’s point of view, Sarah, Plain and Tall tells the story of how Sarah Elisabeth Wheaton comes from Maine to the prairie to answer Papa’s advertisement for a wife and mother. Before Sarah arrives, Anna and her younger brother Caleb wait and wonder. Will Sarah be nice? Will she sing? Will she stay? 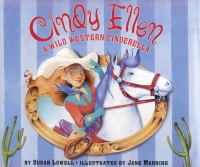 This Newbery Medal–winning book is the first of five books in Patricia MacLachlan’s chapter book series about the Witting family. Set in the late nineteenth century and told from young Anna’s point of view, Sarah, Plain and Tall tells the story of how Sarah Elisabeth Wheaton comes from Maine to the prairie to answer Papa’s advertisement for a wife and mother. Before Sarah arrives, Anna and her younger brother Caleb wait and wonder. Will Sarah be nice? Will she sing? Will she stay? 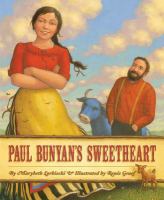 Paul Bunyan has a BIG problem. He’s in love but the lady who has caught his eye will have nothing to do with him. What’s a giant lumberjack to do? When Paul Bunyan meets pretty Lucette, he knows she’s the gal for him. After all, she’s so tall she can’t fit into an ordinary cabin. She can churn butter into a thick creamy river, and when she cleans house she can twirl up a tornado! Why, it’s a match made in heaven! But to win Lucette’s heart, Paul must prove his worth in a love test. 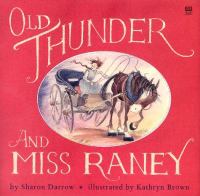 “Raney, dear, not everyone can be a winner,” teases Beatrice Clover. It’s true that Miss Raney and her plodding old horse, Thunder, have never won a single prize at the Washita County Fair. This year Raney is determined to present those judges with the finest stack of biscuits they could ever hope to taste- and win that blue ribbon. But then Raney has more troubles than she can shake a spoon at. Her biscuits burn. Fiddle-dee-dee! Her flour bin is empty. Horsefeathers! A bad storm is brewing and she needs to get to the store fast- but Old Thunder just clop-clop-thunk-thunks along. Still, Miss Raney is mighty determined. Can she and her faithful friend, Old Thunder, find a way to become winners at last?

A Pony for Jeremiah
by Robert Miller [jC Miller]

The acclaimed author of the Reflections of a Black Cowboy series and the Stories of the Forgotten West series now returns with the poignant story of a young African American’s coming of age in the mid-1800’s. After escaping from his life as a slave on a Mississippi plantation, young Jeremiah and his family relocate to Nebraska where he learns the true meaning of freedom and responsibility.