A booklist for: Ragtime

This is a booklist created by Gere Branch library staff to accompany the stage production of Ragtime at Gere’s neighbor, The Lincoln Community Playhouse.

At the dawn of a new century, everything is changing…and anything is possible. Ragtime is a sprawling historical musical. The stories of an upper-class wife, a determined Jewish immigrant and a daring young Harlem musician unfold – set in turn-of-the-century New York – all three united by their desire and belief in a brighter tomorrow. Their compelling stories are set to theatre’s richest and most glorious Tony Award®-winning score by Stephen Flaherty and Lynn Ahrens.

Winning Tony Awards for Best Book and Best Musical Score, this 13 time Tony Award nominated musical is a timeless celebration of life – what it could and should be! Based on the novel Ragtime, by E.L. Doctorow.

Five boroughs rich with history-and one guide to it all! The official and only complete guide to New York City’s landmarks, this beautiful Third Edition has been updated to include 128 new individual sites and sixteen new historic districts. Mayor Michael Bloomberg opens this treasure trove of historical discovery with an elegant Foreword. What follows are insightful descriptions of more than 1,000 individual landmarks and 84 historic districts. Everyone will feel like a native New Yorker when they quickly point out landmarks with the help of 80 easy-to-read maps. This new edition also features new photographs, enhanced maps, and more than a dozen themed sections that make it easy to create a customized sightseeing experience. New York City Landmarks Preservation Commission (New York, NY) is the agency responsible for identifying and designating local landmarks and historic districts. Established in 1965 in response to the destruction of the original Penn Station, the agency is comprised of eleven members appointed by the mayor and a professional staff..

One hundred seventy photographic plates of much architecture in ‘individual buildings, striking details, cityscapes from bold and unusual angles’, and people.

He has sworn to protect the innocent through the ages… Malcolm is a newly chosen Master, a novice to his extraordinary — and dangerous — powers. When his lack of control results in a woman’s death he’s determined to fight his darkest desires, denying himself all pleasure…until fate sends him bookseller Claire. Yet nothing can prepare safety-conscious Claire for powerful medieval warrior Malcolm sweeping her back into his time. In this treacherous world Claire needs Malcolm to survive, but she must somehow keep him at arm’s length. For Malcolm’s soul is at stake — and fulfilling his desires could prove fatal…

“In my reckless and undiscouraged youth,” Lillian Boxfish writes, “I worked in a walnut-paneled office thirteen floors above West Thirty-Fifth Street…” She took 1930s New York by storm, working her way up writing copy for R.H. Macy’s to become the highest paid advertising woman in the country. It was a job that, she says, “in some ways saved my life, and in other ways ruined it.” Now it’s the last night of 1984 and Lillian, 85 years old but just as sharp and savvy as ever, is on her way to a party. It’s chilly enough out for her mink coat and Manhattan is grittier now–her son keeps warning her about a subway vigilante on the prowl–but the quick-tongued poetess has never been one to scare easily. On a walk that takes her over 10 miles around the city, she meets bartenders, bodega clerks, security guards, criminals, children, parents, and parents-to-be, while reviewing a life of excitement and adversity, passion and heartbreak, illuminating all the ways New York has changed–and has not. A love letter to city life in all its guts and grandeur, Lillian Boxfish Takes a Walk by Kathleen Rooney paints a portrait of a remarkable woman across the canvas of a changing America: from the Jazz Age to the onset of the AIDS epidemic; the Great Depression to the birth of hip-hop. Lillian figures she might as well take her time. For now, after all, the night is still young”.

With more than three million foreign-born residents today, New York has been America’s defining port of entry for nearly four centuries, a magnet for transplants from all over the globe. These migrants have brought their hundreds of languages and distinct cultures to the city, and from there to the entire country. More immigrants have come to New York than all other entry points combined. City of Dreams is peopled with memorable characters both beloved and unfamiliar, whose lives unfold in rich detail: the young man from the Caribbean who passed through New York on his way to becoming a Founding Father; the ten-year-old Angelo Siciliano, from Calabria, who transformed into Charles Atlas, bodybuilder; Dominican-born Oscar de la Renta, whose couture designs have dressed first ladies from Jackie Kennedy to Michelle Obama. Tyler Anbinder’s story is one of innovators and artists, revolutionaries and rioters, staggering deprivation and soaring triumphs, all playing out against the powerful backdrop of New York City, at once ever-changing and profoundly, permanently itself. City of Dreams provides a vivid sense of what New York looked like, sounded like, smelled like, and felt like over the centuries of its development and maturation into the city we know today. 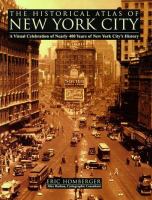 A visual celebration of nearly 400 years of New York City’s history. To celebrate the one-hundredth anniversay of Greater New York, what Alfred Kazin calls “a treasure of a book” is now a gorgeous paperback. The New York Times Book Review raved that The Historical Atlas of New York City “may be as close to a printed CD-ROM as paper can get.” Now, this visual cornucopia of full-color maps, charts, photographs, and drawings covering four hundred years of the city’s history is a trade paperback. Neighborhood by neighborhood, the Atlas takes the reader back through history, detailing such crucial events as the initial settlement of 270 people in thirty log houses; John Jacob Astor’s meteoric rise from humble fur trader to the richest and most powerful man in the city; Frederick Law Olmsted’s design for Central Park; and the fascinating ethnic mix of modern Queens. For both history buffs and the twenty-five million people who visit New York each year, The Historical Atlas of New York City is the guide to America’s first city.

We Are Not Ourselves
by Matthew Thomas [Thomas]

Born in 1941, Eileen Tumulty is raised by her Irish immigrant parents in Woodside, Queens, in an apartment where the mood swings between heartbreak and hilarity, depending on whether guests are over and how much alcohol has been consumed. Eileen can’t help but dream of a calmer life, in a better neighborhood. When Eileen meets Ed Leary, a scientist whose bearing is nothing like those of the men she grew up with, she thinks she’s found the perfect partner to deliver her to the cosmopolitan world she longs to inhabit. They marry, and Eileen quickly discovers Ed doesn’t aspire to the same, ever bigger, stakes in the American Dream. Eileen encourages her husband to want more: a better job, better friends, a better house, but as years pass it becomes clear that his growing reluctance is part of a deeper psychological shift. An inescapable darkness enters their lives, and Eileen and Ed and their son Connell try desperately to hold together a semblance of the reality they have known, and to preserve, against long odds, an idea they have cherished of the future. Through the Learys, novelist Matthew Thomas charts the story of the American Century, particularly the promise of domestic bliss and economic prosperity that captured hearts and minds after WWII. The result is a powerfully affecting work of art; one that reminds us that life is more than a tally of victories and defeats, that we live to love and be loved, and that we should tell each other so before the moment slips away. Epic in scope, heroic in character, masterful in prose, We Are Not Ourselves is a testament to our greatest desires and our greatest frailties.” 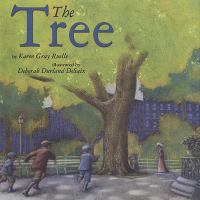 Recounts the life of an elm tree from the time it falls to the ground as a seed, through its growth while momentous events occur to humans and their city, to its maturity as the oldest tree in the park, spreading its canopy for all to enjoy.

Magnet for the ambitious, lodestone for talented and oppressed alike, Mecca for businessmen and immigrants, New York City has presided for over 350 years as the critical center of American life. From its origins as a primitive Dutch outpost to the sprawling urban complex it is today, the defining characteristic of New York has been continuous, dramatic, and rapid change.

Pastrami on Rye: An Over-Stuffed History of the Jewish Deli
by Ted Merwin [647.95 Mer]

For much of the twentieth century, the New York Jewish deli was an iconic institution in both Jewish and American life. As a social space it rivaled?and in some ways surpassed?the synagogue as the primary gathering place for the Jewish community. In popular culture it has been the setting for classics like When Harry Met Sally. And today, after a long period languishing in the trenches of the hopelessly old-fashioned, it is experiencing a nostalgic resurgence. Pastrami on Rye is the first full-length history of the New York Jewish deli. The deli, argues Ted Merwin, reached its full flowering not in the immigrant period, as some might assume, but in the interwar era, when the children of Jewish immigrants celebrated the first flush of their success in America by downing sandwiches and cheesecake in theater district delis. But it was the kosher deli that followed Jews as they settled in the outer boroughs of the city, and that became the most tangible symbol of their continuing desire to maintain a connection to their heritage. Ultimately, upwardly mobile American Jews discarded the deli as they transitioned from outsider to insider status in the middle of the century. Now contemporary Jews are returning the deli to cult status as they seek to reclaim their cultural identities. Richly researched and compellingly told, Pastrami on Rye gives us the surprising story of a quintessential New York institution.

Built 1912-1913, it’s hosted a greater variety of entertainment than any other Broadway theater, including Houdini & the Marx Brothers — Palace Theatre

Great engineering feat of the 19th century, concieved by German immigrant John A Roebling, who died from an injury during construction — Brooklyn Bridge

Home to one of the world’s most renowned jazz musicians, purchased in 1943 & occupied till his death in 1971, located on 107th St. — Louis Armstrong House

250 arce space in the Bronx, formly part of the Lorillard estate, planned in 1895-96 but not landscaped till 1899 — New York Botanical Garden

Created by architect Edward T. Potter, it was damged by fire twice, 1940 and 1985, complementing the building is a 2 1/2 story rectory — St. Paul’s Memorial Church