The Fox on the Fairway

A booklist for: The Fox on the Fairway

This is a booklist created by Gere Branch library staff to accompany the stage production of The Fox on the Fairway at Gere’s neighbor, The Lincoln Community Playhouse.

The Fox on the Fairway is a farcical stage comedy by playwright Ken Ludwig (Lend Me a Tenor, The Game’s Afoot, and more…), which was first performed in 2010. Set in the clubhouse of a posh country club, this is a wild, suggestive comedy that features six outrageous characters — two competing country club owners with a huge bet on which of them will win an annual competition, a young golfing prodigy who’s not fully topped up in the brains department, his flight fiancee (who’s got some golf skills of her own), a man-hungry golf matron, and the dominating wife of the country club manager. Mix them all together, with heavy doses of innuendo and lots of golf humor, and you’ve got a tribute to the classic British farces of Noel Coward and company from the 1920s and 1930s.

31 perfect golf shots from the pen of P.G. Wodehouse. Play the game the P.G. Wodehouse way–with wit, charm, and a touch of mischief. You’ll discover: • How love on the links can lead to the worst kinds of hazards. • A nation where golf is God and all the subjects are in heaven. • Wagers in the rough that can drive millionaires to distraction. • The terrors of teeing off, the frustrations on the fairway, the perils of putting, and much, much more! Stories that will keep you on course…and keep you laughing!

Par for the Course
by Ray Blackston [Blackston]

Sparks fly when Ray Blackson returns with his trademark quirky sense of humor. Golf, politics, and romance collide in Par for the course. Golf range owner Chris Hackett meets an attractive political correspondent who turns his world upside down.

Although Happy dreams of becoming a professional hockey player, he discovers that his hockey slap shot translates to an astonishing 400 yard tee shot. So when his grandmother loses her home to the IRS, Happy decides to earn the house back by joining the pro golf tour, bringing his ferocious temper and outlandish antics to the well-tended fairways. Before long, Happy is a media sensation, attracting crowds and news cameras wherever he goes. But Happy’s bitter rival has his own plans for the golf superstar, resulting in a riotous, laugh-filled confrontation on the links.

Every decade of the 20th century and many great writers–including P. G. Wodehouse, Paul Gallico, Don Marquis, and John Updike–are represented in these great tales of golf. British duffers, amateur sleuths, pros, hustlers, plodders, cheaters, starry-eyed lovers, and crass finaglers are the focus of these stories, which range from comedy to tragedy, mystery, action, introspection, and romance. Each reveals a true love of the game and a wry understanding of golf’s frustrations, perplexities, embarrassments, and moments of pure delight.

Greenskeeper Carl Spackler is about to start World War III, against a gopher. Pompous Judge Smalls plays to win but his nubile niece Lacey Underall wants to score her own way. Playboy Ty Webb shoots perfect golf by becoming the ball. And country club loudmouth Al Czervik just doubled a $20,000 bet on a 10-foot putt. Insanity? No. Caddyshack.

Francis Ouimet’s playoff win over Vardon and Ray in the 1913 U.S. Open, an upset victory so extraordinary it ignited a golf craze in America. Bobby Jones completing his Grand Slam, defeating Gene Homans at Merion in the 1930 U.S. Amateur. Arnold Palmer’s charge from behind at Cherry Hills to take the Open in 1960. These are but a few of golf’s many great moments. Now, in Golf Anecdotes, readers can enjoy a sweeping look at this royal and ancient game, in a volume that is both an informal history of the sport as well as a vivid recounting of golf’s most notable incidents.

Robert Sommers, former editor and publisher of Golf Journal (the USGA’s official publication), takes us on a grand tour that stretches from the game’s dim origins in the 12th century right up to the modern PGA tour. Indeed, no other anecdote book offers this much historical depth or serves up such fascinating lore. We learn for instance that the first known golf match took place in 1504, between James IV of Scotland and the Earl of Bothwell, and that James Durham’s then remarkable 94 at St Andrews in 1767 was a record that stood for 86 years. Sommers likewise paints a colorful portrait of golf in the era of the first professionals–Old Tom Morris, Allan Robertson, and Willie Park–describing the earliest rules, the equipment used, the most memorable events. Of course, much of the book focuses on the 20th century. Here readers will find wonderful tales of Harry Vardon and Francis Ouimet, Bobby Jones and Walter Hagen, Sam Snead and Ben Hogan, Joyce Wethered and Babe Zaharias, Arnold Palmer and Jack Nicklaus, Tom Watson and Lee Trevino, and current stars Nick Faldo, Seve Ballesteros, and Greg Norman. We follow Bobby Jones as he captures each leg of his Grand Slam (and learn that in the eight years that Jones dominated world golf, he kept his game in shape mainly playing friendly weekend matches with his father and friends); watch as Gene Sarazen scores his famous double eagle in the 1935 Masters; travel from tournament to tournament as Bryon Nelson notches up a remarkable streak of eleven consecutive victories (including the 1945 PGA and the Canadian Open); witness Ben Hogan’s harrowing car accident and miraculous comeback; and walk along with Ken Venturi during his courageous 36 hole performance at Congressional, winning the U.S. Open while on the verge of collapse. There are also some notable miscues as well, such as Hale Irwin’s whiff of a two-inch putt in the British Open (he finished second by one shot) and T.C. Chen’s catastrophic double-hit while leading the U.S. Open (he also lost by a shot). Sommers also describes some of the most noteworthy course architects, such as George Crump, creator of the great Pine Valley (Crump lived in a tent on the course for two years, supervising construction, then tragically died before the course opened). He recounts many stories we might not have known, such as how a nineteen-year-old black golfer John Shippen nearly won the second U.S. Open at Shinnecock Hills, Long Island, in 1896. And he captures some of golf’s most moving moments, such as when Babe Zaharias, dying of cancer, visited a golf course for the last time.

Here then is the wide world of golf, the Arnold Palmers and the Ky Laffoons, the double eagles and the double hits. Informative and highly entertaining, Golf Anecdotes will appeal to anyone who loves the game. 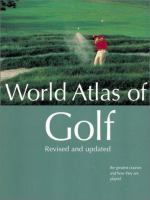 Newly revised and updated, the World Atlas of Golf takes you on a tour of the greatest courses in the world. It features history, comprehensive analysis, and advice on playing the difficult holes for the globe’s 75 most important courses. The gazetteer section covers and additional 110 courses from over 40 countries. The detailed illustrations and photos of the great players really put the reader on the green.

How to Really Stink at Golf
by Jeff Foxworthy [817 Fox]

The man who invented shock rock tells how he slayed his demons–with a golf club. One day between concerts, when Cooper was bored and drunk on a quart-of-whiskey-a-day habit, a friend dragged the rocker out of his room and suggested a round of golf. Cooper has been a golf addict ever since. This is his tell-all memoir; he talks candidly about his life and career, his struggles with alcohol, how he fell in love with golf, how he dried out at a sanitarium back in the late ’70s, and how he put the last nails in his addiction’s coffin by getting up daily at 7 a.m. to play 36 holes. Alice has hilarious, touching, and sometimes surprising stories about his friends: Led Zeppelin and the Doors, George Burns and Groucho Marx, golf legends like John Daly and Tiger Woods–everyone from Dalí to Elvis to Arnold Palmer.

The authors of The Worst-Case Scenario Survival Handbook take to the links! Dave and Josh join golf fanatic James Grace, drawing on their own tragic exploits and the experience of experts to help golfers survive dozens of dire situations. Learn how to finish a round with a broken arm, deal with a cigar brush fire, cure golf addiction, or remove a tick. Discover the best way to play out of a water hazard, make it through a lightning storm, or survive being hit in the privates. Hands-on, illustrated, step-by-step instructions guide you through these and other perils lurking on the fairway. With an appendix of rules for bizarre mis-haps, strategies for surmounting dress-code and equipment crises, and other essential survival tips, this handy guide won’t help you save par-but it could save your bacon! Don’t tee off without it.

The original format of this booklist, as it appeared on the Lincoln Community Playhouse website, included a Wordsearch puzzle, which could not be duplicated for this page on the library’s web site.