This is a booklist created by Gere Branch library staff to accompany the stage production of The Giver at Gere’s neighbor, The Lincoln Community Playhouse — part of their Theater Arts Academy program.

The Giver is Eric Coble’s stage adaption of Lois Lowry’s Newbery-Award-winning book. The world of The Giver is a utopia. There is no pain, but no joy either. The people are assigned their roles in society according to their talents, and men and women are assigned to each according to how well they balance. Each family is allowed one boy and one girl; when children turn twelve years old, they are assigned their roles in society. When Jonas turns twelve, he is assigned the special role of Receiver of Memories. He goes to work with the Giver, who keeps the memories of the world as it used to exist – memories of violence and fear, but also of joy and love. Together, Jonas and the Giver come up with a plan that will change their world forever.

The Giver, the 1994 Newbery Medal winner, has become one of the most influential novels of our time. The haunting story centers on twelve-year-old Jonas, who lives in a seemingly ideal, if colorless, world of conformity and contentment. Not until he is given his life assignment as the Receiver of Memory does he begin to understand the dark, complex secrets behind his fragile community. Lois Lowry has written three companion novels to The Giver, including Gathering Blue, Messenger, and Son.

My Secret: A PostSecret Book

A unique and important book that will appeal to both young adults and their parents, My Secret offers a raw and revealing glimpse into the real lives of today’s teens and twentysomethings. Choosing their own handmade postcards over email or text messages, teens and college students express their hopes, fears, and wildest confessions in a way that truly represents their diverse personalities and voices.

The City of Ember

In the year 241, twelve-year-old Lina trades jobs on Assignment Day to be a Messenger to run to new places in her decaying but beloved city, perhaps even to glimpse Unknown Regions.

The Language of Secrets

Justin Fisher has a lovely wife, a young son, and a successful career as a manager of a luxury hotel, but he’s troubled by the hole in his life left by his absent family. Hardly sure anymore why they became estranged in the first place, Justin gathers the courage to reconnect, only to find that his parents have passed away. And a visit to the cemetery brings the greatest shock of all—next to the graves of his father and mother sits a smaller tombstone for a three-year-old boy: a boy named Justin Fisher.

Shades of Grey: The Road to High Saffron

In a colortocracy where you are what you see, young Eddie Russett has no ambition to be anything other than a loyal drone of the Collective. But everything changes when he moves with his father, a respected swatchman, to East Carmine. There, he falls in love with a Grey named Jane who opens his eyes to the painful truth behind his seemingly perfect, rigidly controlled society.

The Secret Lives of Men and Women: A Post Secret Book

Postsecret.com founder Frank Warren is back with an irresistible addition to his bestselling PostSecret series. For The Secret Lives of Men and Women, Warren has selected a never-before-seen collection of postcards bearing the explosive confessions and captivating revelations of men and women everywhere. Created using photographs, collages, illustrations, and more, the handmade cards offer a compelling dialogue on some of today’s most provocative topics—from marriage and infidelity, to parenting, office politics, repressed fantasies, and even abortion—daring us to consider how well we really know our friends, family, even ourselves. 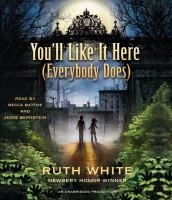 Although Meggie Blue seems to be an average sixth-grader, she is abnormally frightened when residents of her small North Carolina town become fixated on aliens, and soon she and her family are forced to flee, making it clear that all is not as it seems.

An agent from the future where all the world’s problems have been solved goes back in time to ensure that every disaster throughout history runs its course.

Written in 1948, 1984 was George Orwell’s chilling prophecy about the future. And while 1984 has come and gone, Orwell’s narrative is timelier than ever. 1984 presents a startling and haunting vision of the world, so powerful that it is completely convincing from start to finish. No one can deny the power of this novel, its hold on the imaginations of multiple generations of readers, or the resiliency of its admonitions—a legacy that seems only to grow with the passage of time.

As Simple As It Seems

Eleven-year-old Verbena Polter gets through a difficult summer of turbulent emotions and the revelation of a disturbing family secret with an odd new friend who believes she is the ghost of a girl who drowned many years before.

Secrets and Lies: Surviving the Truths that Change Our Lives

By the author of Walking on Eggshells, a compellingly readable journey into the realm of family secrets, offering lessons and insights for those who are hiding the truth and those who discover what has long been hidden. After fifteen years of marriage her husband admitted he was gay, but together they decided to keep it a secret for the sake of their two sons. Building on her personal experience, sixty intimate interviews, and extensive research into the psychology of secrets, Isay shows how the pain of secrets can be lightened by full disclosure, genuine apology, and time.

Running Out of Time

When a diphtheria epidemic hits her 1840 village, thirteen-year-old Jessie discovers it is actually a 1996 tourist site under unseen observation by heartless scientists, and it’s up to Jessie to escape the village and save the lives of the dying children.