A booklist for: The Music Man Jr.

This is a booklist created by Gere Branch library staff to accompany the stage production of The Music Man Jr., at Gere’s neighbor, The Lincoln Community Playhouse.

Based on Meredith Willson’s six-time-Tony-Award-winning musical comedy, The Music Man Jr. features some of musical theatre’s most iconic songs (“Ya Got Trouble”, “Goodnight My Someon”, “Seventy-Six Trombones”, “Marian the Librarian”, “The Wells Fargo Wagon”, “Shipoopi”, and “Gary, Indiana” to name a few), and a story filled with wit, warmth and good old-fashioned romance.  The Music Man Jr. is family entertainment at its best – a bold, brassy show that will have the whole town atwitter!

Master showman Harold Hill is in town and he’s got “seventy-six trombones” in tow. Can upright, uptight Marian, the town librarian, resist his powerful allure?  The story follows fast-talking traveling salesman, Harold Hill, as he cons the people of River City, Iowa, into buying instruments and uniforms for a boys’ band he vows to organize. The catch? He doesn’t know a trombone from a treble clef. His plans to skip town with the cash are foiled when he falls for Marian, whose belief in Harold’s power just might help him succeed in the end in spite of himself.

The Music Man Jr. is the 2018 Penguin Project production for the Lincoln Community Playhouse. The Penguin Project ® brings together young artists with special needs and peer mentors to create a theatre production.

Music is magical. Whether it is fast or slow, loud or soft, haunting or uplifting, music makes our world a richer place. Some people dance to it, some write, play or sing it, and others just listen. Music’s power is that it touches everyone in different ways. It can be enjoyed by a crowd or by one person alone; it can mark grand occasions or bedtime. We’re so used to having music in our lives that we may not always notice how it affects us. In this lilting tribute, Lloyd Moss and Philippe Petit-Roulet lead us to think about how different the world would be if we didn’t have music. 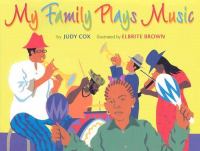 The music of bongos, cowbells, maracas, and even pots and pans fills the air. In this introduction to music, a spunky girl finds the perfect percussion instrument to play along with each member of her musical family. 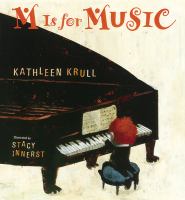 M is for Music
by Kathleen Krull [jP Krull]

Music and the alphabet have always gone together. Don’t kids learn their letters by singing the ABCs? But you’ve never seen–or heard –a musical alphabet like this one. Beloved tunes. Unusual instruments. Legendary virtuosos. From anthems to zydeco, the language of music and the music of language harmonize in one superb symphony. It’s a funky fusion for songsters of all ages!

Playful text opens up the world of music to the youngest readers, and conversational endnotes offer older readers a springboard to further musical explorations. 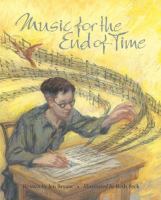 Music for the End of Time
by Jennifer Bryant [jP Bryant]

While detained in a German prison camp, a French composer is given a rare opportunity to write music again. This work is Jen Bryant’s poetic biography of French composer Olivier Messiaen, coupled with Beth Peck’s evocative pastel illustrations, captures both the desolation of a World War II prison camp and the transforming power of music. This book will stir readers of all ages to seek hope in the things that inspire them.

Adjusting to the new neighborhood thanks to the sound of music It’s hard enough moving to a new place, and for Annie there are plenty of extra burdens. Her mother seems sad and worried all the time, having a baby brother makes getting settled in even harder, a box of her prized horse figurines has been lost, and to top it all off, the new house is far away from Annie’s favorite uncle, who shared with her what she loves best of all: piano music. But it turns out that piano music can also be found in her new neighborhood. Each evening when Annie roller-skates, she hears beautiful melodies coming from a house down the street. It is the source of the music, the elderly Mrs. Bergstrom, that eventually provides Annie with hope that the new place may someday feel like home. Young readers will easily identify with Annie in this charming early chapter book from the Christopher Award-winning author of The Silver Balloon.

A weathered stranger delivers an old wicker chest to the Carbuncles’ doorstep. In it they find two sleeping baby boys and a beautiful silver-stringed instrument. For the sake of appearing charitable to their neighbors, the Carbuncles take the boys in, but William and Jules are consigned to the chilly attic, and the dulcimer is locked away — until William is old enough to play it, whereupon he discovers a natural musical talent that leads him on a bittersweet journey to self-discovery.

Eleven-year-old Cody, a coach’s kid, who plays both hockey and guitar, tries to combine his two interests by forming a fledgling band with some of his teammates, but he is presented with a difficult choice when a conflict develops. He and Zip (who plays drums) actually get a gig — the night before an important early-morning hockey game. Cody knows winning the game would mean a lot for team morale. But the gig would mean a lot of money…

Pieces of Why
by K.L. Going[j Going]

Tia lives with her mom in a high-risk neighborhood in New Orleans and loves singing gospel in the Rainbow Choir with Keisha, her boisterous and assertive best friend. Tia’s dream is to change the world with her voice; and by all accounts, she might be talented enough. But when a shooting happens in her neighborhood and she learns the truth about the crime that sent her father to prison years ago, Tia finds she can’t sing anymore. The loss prompts her to start asking the people in her community hard questions–questions everyone has always been too afraid to ask.

Full of humanity, Pieces of Why is a timely story that addresses grief, healing, and forgiveness, told through the eyes of a gifted girl who hears rhythm and song everywhere in her life. 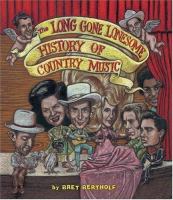 Filled with incredible illustrations, this rollicking tour takes readers from the dawn of country music through the present. From country hair to country clothes, readers are taken on a journey through a rich cultural history, and along the way, they meet greats like Jimmie Rodgers, Minnie Pearl, and bluegrass musician Bill Monroe. Both thoroughly educational and laugh-aloud silly, this celebration of an American invention is a treasure for parents and children to share. 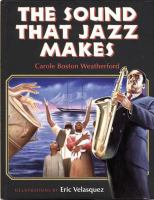 A symphony of sound and color, The Sound That Jazz Makes is an eloquently rendered celebration of a remarkable heritage. Author Carole Boston Weatherford’s lyrical stanzas combine with the power of luminous oil paintings by Coretta Scott King New Talent winner, Eric Velasquez (The Piano Man) to trace the development of jazz. From African forests to wooden slave ships to Harlem nightclubs, the tragic and joyous legacy of the African-American experience gives jazz its passion and spirit. 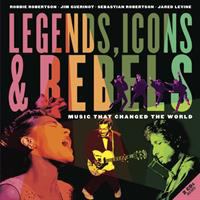 Music industry veterans Robbie Robertson, Jim Guerinot, Jared Levine and Sebastian Robertson invite younger readers to share the celebration of 27 musical legends. Carefully compiled like a great playlist, the line-up features originators, rebels and risk-takers across diverse genres. From Ray Charles to Johnny Cash, Chuck Berry to Bob Dylan, Robertson shares anecdotes about these artists and the influence they had on his own musical journey. Filled with personal stories of creativity and collaboration that will fascinate, enlighten and inspire music fans of all ages. 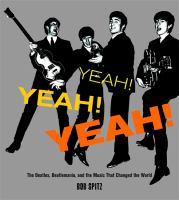 Yeah! Yeah! Yeah! The Beatles, Beatlemania, and the Music That Changed the World
by Bob Spitz [j781.66 BeaYs]

It starts in the housing projects and school playgrounds of Liverpool, where four boys would discover themselves–and a new form of music called rock ‘n roll. It takes us from the famous first meeting between John and Paul, to the clubs of Liverpool and Germany when George and Ringo join the band, down Penny Lane and Strawberry Fields, to America and the height of the Beatles’ success–when they were still teenagers. In Yeah Yeah Yeah, Spitz recreates the thrills, tears and magic of his New York Times bestselling adult biography, but in a style and format that’s accesible for young readers. This book includes photos, sidebars and graphic elements. It’s a book about teens who changed the world.

The Show Must Go On
by Kate Klise [j Klise]

Two mice and a crow, who travel with a circus, cleaning up the spilled popcorn after every performance, come to the rescue when a greedy con artist takes over the management of the circus..

Life at Deacon Smith’s Home for Waifs would be completely dreary if it weren’t for Possum’s best friend, Billy, who “thinks up lies faster than he can talk.” When Billy hears that gold is hidden in the mountains, he escapes from the orphanage, taking Possum with him. The two runaways embark on a journey through the Western frontier in search of the gold. In the process, they get tangled up in a murder, spy on a lunatic, and barely manage to keep ahead of the law. Filled with colorful characters, plot twists, and dramatic scenery of the old west, this is an exciting new adventure story in the tradition of Huckleberry Finn.

The Amazing Maurice runs the perfect Pied Piper scam. This streetwise alley cat knows the value of cold, hard cash and can talk his way into and out of anything. But when Maurice and his cohorts decide to con the town of Bad Blinitz, it will take more than fast talking to survive the danger that awaits.

For this is a town where food is scarce and rats are hated, where cellars are lined with deadly traps, and where a terrifying evil lurks beneath the hunger-stricken streets…

Set in Terry Pratchett’s beloved Discworld, this masterfully crafted, gripping read is both compelling and funny. When one of the world’s most acclaimed fantasy writers turns a classic fairy tale on its head, no one will ever look at the Pied Piper–or rats–the same way again!

After unscrupulous collector S. Wendell Palamino cons him out of a valuable baseball card, sixth-grader Griffin Bing puts together a band of misfits to break into Palomino’s heavily guarded store and steal the card back, planning to use the money to finance his father’s failing invention, the SmartPick fruit picker.