A booklist for: The Somewhat True Tale of Robin Hood

This is a booklist created by Gere Branch library staff to accompany the stage production of The Somewhat True Tale of Robin Hood at Gere’s neighbor, The Lincoln Community Playhouse.

The Somewhat True Tale of Robin Hood is a comedic play, published in 2000, and written by Mary Lynn Dobson.

It sure is hard to be humble when you’re a swashbuckling, egocentric super-hero. But our gallant guy-in-green tries his best as he swaggers through The Somewhat True Tale of Robin Hood, a frantically funny, Monty Pythonesque retelling of the classic. This time around, the legendary legend, in his never-ending quest to aid the needy, encounters a lovely damsel-in-distress (oddly obsessed with skin conditions); an ever-scheming sheriff who would rather bowl a strike than hit a bull’s-eye; a gold-hoarding, bad-guy monarch wannabe; and a good-natured “Town’s Guy” who manages to make his way into every scene, whether he belongs there or not. Combine them with an expandable band of spoon-wielding Merry Men whose collective IQs equal six, and you’ve got an irreverent jaunt through Sherwood Forest you won’t soon forget!

Reading Recommendations for fans of The Somewhat True Tale of Robin Hood:

In this intimate history, Valerie Paradiz tells the real story of the greatest literary collaboration of the nineteenth century, and gives the long-lost narrators of these beloved tales their due.

A new translation of 239 fairy tales collected by the Brothers Grimm. Also includes a listing of their oral and/or literary sources.

Hunted like an animal by Norman invaders, Bran ap Brychan, heir to the throne Elfael, has abandoned his father’s kingdom and fled to the greenwood. There, in the primeval forest of the Welsh borders, danger surrounds him–for this woodland is a living, breathing entity with mysterious powers and secrets, and Bran must find a way to make it his own if he is to survive.

Magic By the Book
by Nina Bernstein [j Bernstein]

Neither Anne nor Emily remembered choosing the book at the library, but when as they read it, the boundary between their world and the one described in the book disappears. Suddenly they are in Sherwood Forest, where they join Robin Hood’s band. The further adventures that await Anne, Emily, and their brother, Will, are the kind they had always dreamed about. 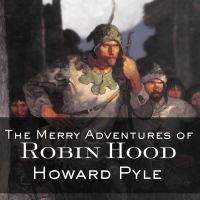 Recounts the legend of Robin Hood, who plundered the king’s purse and poached his deer and whose generosity endeared him to the poor.

In the depths of the forest, Robin raises an army to challenge the evil Sheriff. Wearing a dark hood for disguise and with his unparalleled gift for the bow, Robin quickly becomes an outlaw, fighting the forces of evil for the good of the poor.

King Solon the Red attempts to capture his runaway daughter Ettarde and force her into marriage with a rival king who has been threatening his reign. 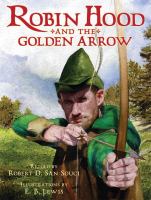 Retells, in easy text, of the Sheriff of Nottingham’s plot to hold an archery contest in order to capture the outlaw Robin Hood, but Robin and his band of merry men arrive in disguise with a plan of their own.

In 13th century England, Robin and his band of marauders confront corruption in a local village and lead an uprising against the crown that will forever alter the balance of world power. And whether thief or hero, one man from humble beginnings will become an eternal symbol of freedom for his people.

These retold fairy tales and modern myths redefine magic through de Lint’s enchanted characters: playful Crow Girls sneaking into the homes of their sleeping neighbors; a graffiti artist risking everything to expose a long-standing conspiracy; a half-human girl choosing between her village and her strange birthright; and an unrepentant trickster throwing one last party in his folkloric tradition.

This is a collection of 35 folk tales from all over the world. You’ll meet ghosts, spirits, robbers, princesses, sharks, and tigers, wealthy sultans and hungry peasants, fair maidens and cackling witches, rainbow birds and laughing fish. The stories are romantic, funny, sad, exciting, miraculous, and exotic.