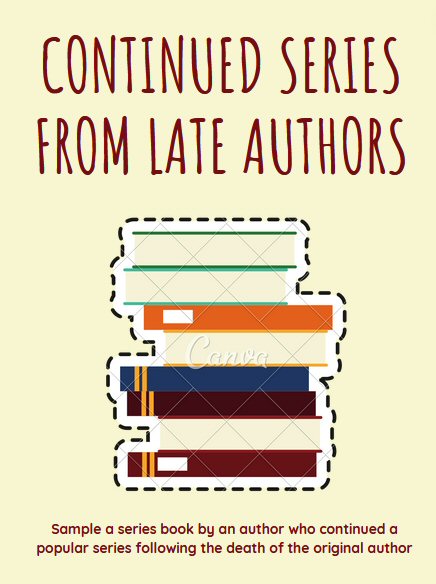 The following list was compiled for the Just Desserts mystery fiction discussion group — the list currently focuses exclusively on Mystery, Thriller and Suspense series, but it may be expanded to include other genres in the future.

In 1959, then 32-year-old Robert Bloch wrote Psycho (his sixth or seventh novel to be published). That novel was then adapted (by another author) into Alfred Hitchcock’s classic 1960 film. Decades later, Block wrote “Psycho II” (1982) and “Psycho House” (1990). Bloch passed away in 1994. In 2016, established author Chet Williamson published “Psycho Sanitarium”, a continuation of Bloch’s original storytelling universe.

Between 1939 and 1958, American writer Raymond Chandler wrote seven novels and one short-story collection featuring his Los Angeles private investigator character Philip Marlowe, an iconic character in genre fiction. When he died in 1959, Chandler left behind an uncompleted manuscript for “Poodle Springs”, his final Marlowe novel. Three decades later, bestselling mystery author Robert B. Parker (Spenser, Jesse Stone, Sunny Randall, etc.) took Chandler’s partial storyline and completed it. Parker also wrote his own all-original Marlowe novel, “Perchance to Dream”, a sequel to Chandler’s “The Big Sleep”. Parker, himself, died in 2010, and in the years since then three different authors have written/published “authorized” follow-ups in the Marlowe series.

From 1920 to 1975, Agatha Christie wrote 33 Hercule Poirot novels, and dozens of short stories that featured the fastidious little Belgian detective. During WWII, she wrote “Curtain”, which featured the death of Poirot, with instructions that it was not to be published until after her own passing. Her publisher actually published “Curtain” in 1975, the year before Christie passed (1976). It was nearly 40 years before the Christie estate authorized another author to write any additional Poirot novels, and Sophie Hannah has now put out four new stories allowed Hercule to exercise his “little grey cells” once again.

In 1984, Maryland insurance broker Tom Clancy introduced his best-known character, Jack Ryan in “The Hunt for Red October”. President Reagan identified Clancy as one of his favorite writers, thus boosting Clancy’s profile in the literary world. In the next 29 years, before his passing in 2014, Clancy wrote dozens of additional books, often in partnership with co-authors. Clancy wrote the first nine Jack Ryan novels by himself, then four with writing partners, first Grant Blackwood, then Mark Greaney. Since Clancy died in 2014, Mark Greaney wrote three original Jack Ryan novels, before deciding to focus on his own original fiction. The last five Jack Ryan novels have been written by Marc Cameron.

Author Blaize Clement  (a.k.a. Lee Silvey) created the Dixie Hemingway “Cat Sitter” cozy/amateur detective series in 2005, and managed to published 7 volumes before her untimely demise in 2011. Before she passed away, she asked her son, John Clement if he would be willing to continue the series after she was gone, and he has, with four additional volumes published from 2013 to 2016, under the join credit of Blaize and John Clement.

Clive Cussler grew up in Alhambra, California, and attended Pasadena City College before joining the Air Force. He went on to a successful advertising career, winning many national honours for his copywriting. He also explored the deserts of the American Southwest in search of lost gold mines, dived in isolated lakes in the Rocky Mountains looking for lost aircraft and hunted under the sea for shipwrecks of historic significance, discovering and identifying more than sixty. Like his hero, Dirk Pitt, he was also an avid enthusiast of classic cars. From 1973 to 2003, Cussler wrote 17 volumes in the Dirk Pitt series under his own solo credit. From 2004 on to 2019’s “Celtic Empire”, Clive shared the writing credits on the continuing Dirk Pitt novels with his son, Dirk Cussler. Clive Cussler also wrote in several other series, but always with co-authors: The NUMA Files with either Paul Kemprecos or Graham Brown; The Oregon Files with either Craig Dirgo, Jack du Brul or Boyd Morrison; The Isaac Bell series with Justin Scott or Jack du Brul; and the Sam and Remi Fargo Adventures, with either Grant Blackwood, Thomas Perry, Russell Blake or Robin Burcell. Since Cussler passed in 2020, his son Dirk has continued the Dirk Pitt series. Whether the other series will continue with new entries by the co-authors remains to be seen.

This is probably the literary series with the most continuations, parodies, pastiches and tributes — literally hundreds of them — in the history of publishing. Enough so that we have a separate page here on BookGuide for it. Check out our Elementary… booklist page.

Daphne DuMaurier’s 1938 novel Rebecca is considered a masterwork in the field of gothic suspense, and is generally also considered to be a “classic mystery” as well. It is a bestseller, which has never gone out of print since its original publication, and features several archetypal characters. The novel has inspired three additional books, all approved by the DuMaurier estate.

The Other Rebecca (1996)
by Maureen Freely (Freely)

After Doyle’s Sherlock Holmes follow-ups, it is probably the character of British secret agent James Bond, as created by Ian Fleming, who has appeared in the next most extensive series of subsequent “official” and “unofficial” novels, by a regularly-changing group of authors. Check out our extensive booklist here on BookGuide, The Name is Bond…James Bond!

From 1999 to 2012, Vince Flynn wrote 13 entries in the New York Times bestselling series featuring CIA counter-terrorist agent Mitch Rapp, before Flynn’s unexpected passing in 2013 at the age of 47. Fellow bestselling author Kyle Mills was tapped to continue the Mitch Rapp series, and has released seven additional volumes between 2015 and 2021, with more likely to come.

Dick Francis was an icon of the mystery publishing field. From 1962 to 2000, the former British jockey wrote near 40 mystery/suspense novels, all connected to the world of horse racing in some way, under his own solo author credit. Most of his novels did not feature recurring central sleuths, although there were a few featuring Sid Halley and a couple featuring Kit Fielding — both ex-jockeys who made their way into crime-solving. In 2000, Dick decided to “retire” from writing, and starting with 2007’s “Dead Heat”, Dick shared the writing credits with his son, Felix. Dick Francis passed away in 2010 at the age of 90. Since then, Felix, a physicist and former teacher, has continued his father’s legacy, with more horse-related mysteries in the “Dick Francis” style.

Tony Hillerman is consider the dean of Southwestern-set American mystery fiction. After a career as a journalist and educator, Hillerman began publishing the series that featured Joe Leaphorn and Jim Chee in 1970, with “The Blessing Way”. Between 1970 and his death in 2008, Hillerman published a total of 18 volumes featuring his Native American detectives, as well as a number of stand-alone novels and non-fiction work. Five years after his death, Tony’s daughter, Anne, began a continuation of the Leaphorn & Chee series, with the additional of a new character of her own creation, Navajo Nation Police Officer Bernadette Manuelito. That series continues…

Stieg Larsson was a Swedish journalist and writer, specializing in covering right-wing extremism, through the news magazine that he ended up editing, Expo. Additionally, Larsson had been working on a trilogy of contemporary thrillers, known as The Millennium Trilogy, and he had completed the manuscripts for all three, when he was felled by a heart attack at the age of 50. His three novels, focused on journalist Mikhael Blomkvist and hacker Lizbeth Salander, and starting with “The Girl With the Dragon Tattoo,” were all published posthumously, and became international bestsellers. Oddities in his will left his literary rights to his family, instead of to his spouse, and they, along with his publisher, chose to find an author to continue the stories of Blomkvist and Salander. That author was David Lagercrantz, who has thus far put out three authorized follow-ups to the Millennium Trilogy, as of 2019.

Robert Ludlum was one of the best-selling thriller writers of the second half of the 20th century. He wrote over 25 novels by himself from 1970 until his death in 2001, leaving several full manuscripts behind that were then released posthumously. Towards the end of his career, he had begun co-authoring works, and following his death, numerous books have continued to be released under the umbrella titles “Robert Ludlum’s _____”, continuing his characters. Ludlum’s best-known series featured former intelligence agent and professional killer Jason Bourne — Ludlum wrote three novels featuring this character, and two other authors have continued Bourne’s story with over a dozen new entries. One of the last original novels Ludlum wrote was “The Janson Directive,” introducing a new series character, Paul Janson. Two authors have continued the Janson stories as well.

Robert B. Parker was a prolific mystery/thriller writer, writing in multiple series (including westerns), as well as numerous stand-alone novels. During the course of his life, he published 39 Spenser novels, 9 Jesse Stone novels and 6 Sunny Randall novels — all with distinctly different styles. Following Parker’s death in 2010, at the age of 78, his estate and publisher agreed to bring in other authors to continue all three of those already-listed series — in the case of Spenser, Ace Atkins has written 9 new Spenser novels, and in the case of Sunny Randall, her adventures have been continued in three new novels (so far) by Mike Lupica. Jesse Stone’s further exploits have been handled by a series of three different authors so far, in 11 new novels.

In 1969, The Godfather by Mario Puzo (a.k.a. Mario Cleri) became a literary phenomenon, leading to the 1972 film The Godfather, starring Marlon Brando and directed by Francis Ford Coppola, which further cemented interest the works about the Corleone crime family. Puzo ultimately went on to write three official novels in the series during his lifetime (1920-1999), and in the years since then, two other authors have added four more works to the “official” Godfather canon.

Dorothy L. Sayers is one of the three most prominent female mystery authors of The Golden Age of Mystery Fiction (the other two being Agatha Christie and Mary Roberts Rinehart), and her greatest literary creations were Lord Peter Wimsey and Harriet Vane. During her lifetime (1893-1957), she published 14 novels featuring that pair of characters, with a 15th novel and some short story collections published posthumously. Since then, only one author has been officially authorized to write follow-up novels featuring Lord Peter and Harriet — Jill Paton Walsh, who put out four entries from 1998 to 2013.

Rex Todhunter Stout was an American writer noted for his detective fiction. His best-known characters are the detective Nero Wolfe and his assistant Archie Goodwin, who were featured in 33 novels and 39 novellas between 1934 and 1975. Author Robert Goldsborough grew up on the Nero Wolfe novels by Stout, before moving into newspaper work. After Stout’s passing in 1975, Goldsborough wrote “Murder in E Minor”, featuring Stout’s classic characters of Wolfe and Goodwin, mainly as a private gift to himself and his mother, who had gotten him started on reading the Stout novels in childhood. Eventually, Goldsborough got permission from Stout’s estate and publisher to publish “Murder in E Minor”, and it sold well enough that Goldsborough was encouraged to continue with additional Wolfe & Goodwin stories. There have been fourteen as of 2021.

Margaret Truman was the only child of President Harry S. Truman and First Lady Bess Truman. She was born in 1924, and lived a very active and social life. She was classical soprano, actress, journalist, radio and television personality, writer, and New York socialite. From 1980, until her death in 2008, she published a series of 24 novels in her Capital Crimes series — murder mysteries set in Washington, D.C., and frequently involving historically significant government buildings and agencies. Several years after her passing, her publisher contracted with Donald Bain to continue her Capital Crimes novels. Following Bain’s own death in 2017, the series has continued, by author Jon Land.

(NOTE: Jon Land has also followed in Donald Bain’s footsteps by becoming the official author of the latest Murder, She Wrote “Jessica Fletcher” novels, after Bain wrote more than 50 of them.)