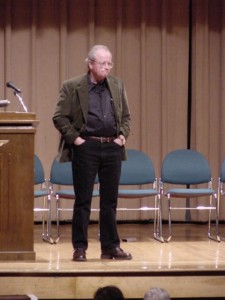 A list of works by Nebraska author
Kent Haruf

Haruf was born in Pueblo, Colorado, the son of a Methodist minister. In 1965 he graduated with a BA from Nebraska Wesleyan University, where he would later teach from 1986 to 1991. He earned an MFA from the Iowa Writers’ Workshop at the University of Iowa in 1973.

Before becoming a writer, Haruf worked in a variety of places, including a chicken farm in Colorado, a construction site in Wyoming, a rehabilitation hospital in Denver, a hospital in Phoenix, a presidential library in Iowa, an alternative high school in Wisconsin, at Nebraska Wesleyan University in Lincoln, NE (1986-1991) and Southern Illinois University in Carbondale, Illinois, and as an English teacher with the Peace Corps in Turkey. He lived with his wife, Cathy, in Salida, Colorado, until his death in 2014. He had three daughters from his first marriage, and five step-children.

All of Haruf’s novels take place in the fictional town of Holt, in eastern Colorado. Holt is based on Yuma, Colorado, one of Haruf’s residences in the early 1980s. His first novel, The Tie That Binds (1984), received a Whiting Award and a special Hemingway Foundation/PEN citation. Where You Once Belonged followed in 1990. A number of his short stories have appeared in literary magazines.

Plainsong was published in 1999 and became a U.S. bestseller. Verlyn Klinkenborg called it “a novel so foursquare, so delicate and lovely, that it has the power to exalt the reader.” Plainsong won the Mountains & Plains Booksellers Award and the Maria Thomas Award in Fiction and was a finalist for the National Book Award for Fiction.

Eventide, a sequel to Plainsong, was published in 2004. Library Journal described the writing as “honest storytelling that is compelling and rings true.” Jonathan Miles saw it as a “repeat performance” and “too goodhearted.” A third novel in the series, Benediction was published in 2014.

In the summer of 2014 Haruf finished his last novel, Our Souls at Night, which was published posthumously in 2015. He completed it just before his death. The novel was subsequently adapted in 2017 into a film by the same name, directed by Ritesh Batra and starring Robert Redford and Jane Fonda. Plainsong, Eventide, and Benediction have been adapted for the stage by the Denver Center for the Performing Arts.

On November 30, 2014, Haruf died at his home in Salida, Colorado, at the age of 71, from interstitial lung disease.

In addition to the awards received for specific books (listed under the individual books in the bibliography below), Haruf has also received the following honors:

Additional information about Kent Haruf can be found at the following Web sites: 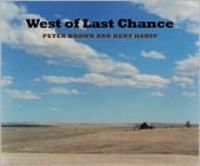 “To See Your Story Clearly, Start by Pulling the Wool Over Your Own Eyes”
Writers on Writing: Collected Essays from The New York Times, 2001.