A list of works by Nebraska author
Stephanie Grace Whitson

Stephanie Grace Irwin was born in 1952 in East St. Louis, Illinois. She graduated from Southern Illinois University with a Bachelor of Arts in French in 1973, the same year she married Robert Whitson.

The Whitsons moved to Nebraska in 1975, where they settled into a comfortable relationship with friends and family and their local church, home-schooled their four children (two sons and two daughters), grew organic produce for sale at local farmers markets, and created homemade crafts.

Stephanie’s first novel, Walks the Fire, was published in 1995. Following her growing success as an author, and husband Bob’s need for more frequent medical care (he was diagnosed with cancer in 1996), the family moved from their rural property to Lincoln.

Since Bob’s death in 2001, Stephanie has happily seen some of her children get married, and has remarried herself. She remains in Lincoln, NE and continues to publish, on average, at least one new book per year. She is perhaps best known for her historical inspirational romances, most often set on the Great Plains. In addition to her fiction, she has also published one non-fiction book, How to Help a Grieving Friend: A Candid Guide for Those Who Care [2005].

Additional information about Stephanie Grace Whitson can be found at the following Web sites:

How to Help a Grieving Friend: A Candid Guide for Those Who Care
[2005] 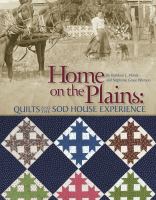 Home on the Plains: Quilts and the Sod House Experience
Co-authored with Kathleen L. Moore
[2005]