A list of works by Nebraska author
Tom J. Frye

Lincoln author Tom Frye grew up in and around the Havelock neighborhood of Nebraska’s Capitol City. In his adolescent years, he got involved in a variety of troublesome activities, or, as he put it in the biographical blurb at the back of his first book…he “was always walkin’ on the wrong side of the fence.” Several years later, when his probation officer put him in touch with another troubled youth, Frye took inspiration from that youth’s suicidal tendencies to write the local bestseller, Scratchin’ on the Eight Ball, which has become his best-known work.

Tom Frye is a youth worker and a storyteller. He has worked as a street contact for a Runaway Shelter, as a Juvenile Care Specialist at a Detention Center, and a Family Support Worker for At-Risk kids. He is currently the creator and director of an anti-drug program known as Kastleland, which includes a play and an obstacle course at a YMCA camp. When he’s not performing his role as the Bard and Dragonslayer for this program, he’s busy at work on another novel. He’s the author of Scratchin’ on the Eight Ball and its sequel, The Kid, the Cop and the Con. Both books are about his experiences with At-Risk kids.

Some day he would like to retire from youth work and move to a cottage in Ireland. Some day… (Biographical notes from the back cover of The Jewel Folk [1992])

Additional information about Tom J. Frye can be found at the following Web sites:

Dragon Stone
[published prior to 1982]

Book One of a planned epic fantasy series, The Legend of the Lion. [a.k.a. “Lionstone Book One”]

Art by Kansas City-based artist Lee Hammond, who is also a native of Lincoln, Nebraska.

(From the back cover:) “A battle between Light and Darkness is waged on the Isle of the Seven Oaks. The Three Races, Men, Elves, and Dwares must unite before the Dark one comes to the land.

Sanjamon Silvertree is called upon to write a story; a tale that will unite the Three Races. But, Graels, like Sanjamon, have been rejected for long years. The Graels, a race of Little Folk who claim to have Elven and Dwarven blood flowing through their veins, are slain outside the boundary of Hawk’s Hollow. Graels as a whole are said to be demonspawn. Sanjamon is most certain the Fair Folk will reject his message.

To make matters even more complicated for the peace-loving little storyteller, Sanjamon discovers the ancient blade, Falcon dan-Alisbar. Falcon was wielded long ago by a mighty Elven Lord to slay a terrible dragon. The blade now claims his days of great deeds are not yet over. The legendary long knife is most certain that he and Sanjamon are destined to slay a powerful King of the Dark. And Sanjamon finds that grand adventures are sometimes thrust upon those least likely to succeed. This begins the first book in the Legend of the Lion series.”

Frye began writing this in approximately 1980. The inside back cover of The Jewel Folk lists the projected titles of the remaining volumes in The Legend of the Lion: Book Two: Gems of Light; Book Three: Lionlord and the Black Rose; Book Four: Talismans of Erin; Book Five: War of the Oaks; Book Six: Dark Shadows; and Book Seven: King of Light.

Nine year-old Jason and his little brother, Chuckey, go off on a grand adventure to destroy the horrid Warriors of Fear. Wizards, elves, dwarves, gnomes and Gollbuffers keep Jason and five year-old Chuckey on their toes. The two brothers find themselves caught up in a quest, to not only rid the magical land of Fear, but also to set free Princess Faith, an elven lass captured by the dreaded Dark Wizard of Fear Keep.

(From the back cover): “Signals From the Corner is the story of a young boy who storms into Beth Calter’s life one day. An experienced educator, Beth is not prepared for the whirlwind known as Richie. In a classroom where inclusion is required, Beth finds herself resorting to excluding little Richie by sending him to his own safe haven: The Corner.

The struggle for Beth is long and hard, and though Richie is finally diagnosed with ADHD, their problems are far from over. Teacher and student both take small steps on a long journey, and Beth discovers the true meaning of the Ripple Effect and why the “pebble” was cast into the calm and quiet of her life. Teachers, this one is for you!”

At the back of Signals From the Corner, Tom Frye includes the first chapter of what he describes as “my latest work” – Lost Angels, which also showed up on a pre-order form at the back of this book.

Squeaker: The Adventures of a Country Mouse
by Tom Frye and Thomas Bretta [1997]

Children’s book. The story of a mouse’s escapades during a flash flood.

Based on the real-life experiences of a boy who not only contracted HIV at the age of 14 but died of AIDS complications at the age of 19. He lived in Lincoln, and author Frye worked with him as a Family Support Worker in 1987.

Not yet published. Sample available on Frye’s web site. 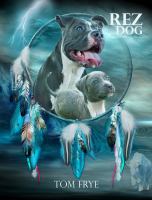 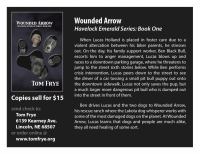 Book One in the Havelock Emerald series

Scratchin’ on the Eight Ball
[undated]

A play, adapted by the author from his own novel.

The Woods of Bloody Mary
[undated]

Play adapted by the author from his own novel.