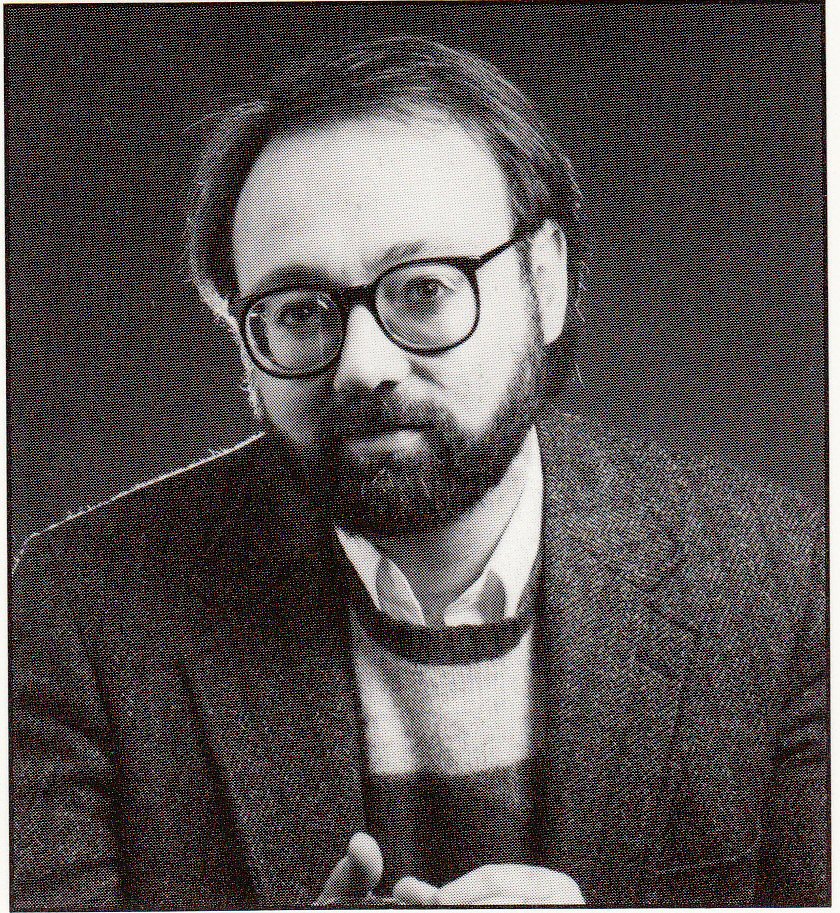 Omaha native William J. Reynolds graduated from Creighton University and was the author of a very popular mystery series based on the exploits of a part-time detective and part-time writer named “Nebraska” who refuses to tell anyone his first name. Reynolds’ six mysteries include The Nebraska Quotient, Things Invisible, and Drive-By. He is also the author of several short stories, magazine articles, and non-fiction.

Reynolds is a member of the Authors Guild and has been a past board member of the Mystery Writers of America. He was named the South Dakota Author of the Year in 1987, was given the Key to the City of Omaha in 1988 in recognition of his “Nebraska” mystery series, and is an Admiral in the “Great Navy of the State of Nebraska.”

“I taught at a technical school. I consulted on some local political campaigns. I wrote a software manual, magazine articles and advertising copy, plus some non-fiction books.” (quoted in interview)

(Additional information about William J. Reynolds can be found at the following Web sites:)

Volume 1 in the Nebraska Mystery series.

Former private investigator turned writer Nebraska finds himself involved with the murder of his ex-partner, a pornography ring, two different Mafia gangs, the decadent and desperate daughter of a senator, and a political conspiracy reaching to the White House.

In the fast-paced, diamond hard tradition of Raymond Chandler, this tough and literate saga of Midwest murder and corruption introduces Nebraska — a young ex-private eye, world-weary but decent, and not quite as hard-boiled as he’d like to pretend. He’s left the grubby world of private detectives to eke out a living as a freelance writer — in Omaha. Nebraska is forced to delay his work on The Book when ex-partner Morris Cohen crashes through his screen door and expires on the living room rug — but not before delivering a damp strip of incriminating negatives featuring a senator’s daughter in some very revealing postures. Catapulted back into the P.I. trade, Nebraska swiftly finds himself ensnared in a tangled web of blackmail, deceit, and death. Suddenly he’s back in the world he fled; up hard against the Omaha police, coping with a sleazy porno ring and with a presidential candidate who’s got something to hide. Caught between two fierce Mafia mobs, Nebraska finds his life’s on the line as he races to solve the brutal killings and uncovers a stunning conspiracy that could reach all the way to the White House.

When asked why he chose to set his book in Omaha, William J. Reynolds responded with three reasons: “It’s not L.A., New York, Boston, or any other glamorous place; I know the city; and there’s something cowboy-ish about it, which appeals to my belief that the ‘P.I.’ is the modern variation of the cowboy myth. I called my P.I. Nebraska for the same reason — it’s a very Western, very American word.”

[Nominated for a Shamus Award in the Best First Novel catagory by the Private Eye Writers of America.] [Note: The original manuscript for this novel was donated to Bowling Green State University in Ohio, in 1984.]

Volume 2 in the Nebraska Mystery series.

Jack Castelar, a wealthy midwestern banker, lies dead in the snow a few feet from Nebraska, the sharp-witted detective who begins with this first piece of a very strange puzzle to put together a solution and pin down the real killer.

Just twenty-four hours earlier, Nebraska considered himself retired from detective work. But with bills piling up and his book progressing slowly, the prospect of some easy money for finding Kate Castelar, the runaway daughter of a local banker, is enough to get him back into his gumshoes. Now the banker is found dead and it looks like the killer has taken Karen with him.

For all his hard-boiled bravado, Nebraska — cold, exhausted, and anxious to get home before his errant wife departs on her next exotic voyage — just wants to find Kate and go home. But his wits and his uncanny intuition soon lead him out of the elegance of the banker’s home into the upstairs rooms of seedy cowboy bars and, finally, right to the guy with the answers — and a gun that is pointed straight at him.

In William J. Reynolds’ second Nebraska mystery, the midwestern detective once again finds himself entangled in the silent corruption that lies behind the civility of Omaha. Moving Targets is fast-paced and surprisingly warm, a thrilling mystery in the tradition of Raymond Chandler.

Volume 3 in the Nebraska Mystery series.

Desperation and deception in Omaha, and a private eye as quirky and engaging as his name — Money Trouble is William J. Reynolds’s latest installment in the brilliant, fast-moving Nebraska mystery series.

Reynolds, whose first book, The Nebraska Quotient, was nominated for a Shamus Award by the Private Eye Writers of America, has created a cool private eye with a twist. A freelance writer when he can afford to be, Nebraska ties on the gumshoes only when his bank balance drops precipitously – or when something to enticing to resist comes along.

Such is the case when, on muggy summer night, the halting boice of an old flame beckons from his answering machine, and Nebraska finds himself swept up in sexual trysts, bank robberies, money-laundering and murder. “Life’s full of its little coincidences,” says Nebraska, but he soon wonders, and so do we, as events begin to pile one on top of another with increasing speed and violence and Money Trouble spirals to its dark finish.

Money Trouble is Reynolds’s finest mystery to date, and another day in the increasingly popular life of P.I. Nebraska.

Volume 4 in the Nebraska Mystery series.

For some, life in the Midwest is peaceful, quiet and simple. For others, it is a facade behind which lie many somber passions, many dark secrets, many buried sins.

The latest fast-paced adventure in the acclaimed Nebraska mystery series, Things Invisible is packed with the same kind of tough-talking wit and hard-boiled detection that have made Nebraska a private-eye favorite.

When a young woman named Meredith Berens disappears, a reluctant Nebraska accepts what he things is the routine task of finding her. His client, Meredith’s mother, claims that she’s a sweet girl and a recluse, and that running away just isn’t something her daughter would do. So why won’t Mrs. Berens call the police? Why is she so evasive about the family past? Why won’t she tell Nebraska who Meredith’s father is — even when it appears that Meredith tried to reach him just before she vanished?

As Nebraska begins his quest, the girl-next-door he thought he was tracking dissolves with each new clue. Meredith seems to have many faces, and many separate lives.

Why has Meredith told her friends that she is engaged to Thomas Wayne, a prominent local businessman, when Wayne emphatically denies it? Is Wayne lying, or was Meredith? And why is Wayne’s father so protective of his son’s reputation — protective to the point of violence?

Finding Meredith soon becomes a job Nebraska wishes he’d turned down; every foray into her past yields more and more questions. When Nebraska looks for the answers, he finds some very nasty surprises instead: knife-wielding thugs, a ring of professional party girls, a local mob boss with some thoughtful advice, and a brutal killer who isn’t done killing yet.

Volume 5 in the Nebraska Mystery series.

Actions have consequences. This simple truth is driven home with near-fatal force in the newest sizzling mystery featuring the critically acclaimed P.I. Nebraska.

When Nebraska gets in a fistfight with a muscle-bound rich boy while wrapping up a routine skip-trace in Minneapolis, he things nothing of it — until, back in Omaha, a close friend borrows his car and is savaged by baseball bat-wielding thugs, then left for dead in a clear case of mistaken identity. When he spots several menacing-looking characters staking out his house, Nebraska knows he’s made someone very angry. Someone with connections. Someone who’s made enough and powerful enough to set four goons on twenty-four-hour stakeout. The question is: Who?

Realizing his life hangs in the balance, the detective breaks out the three aliases he’s spent years meticulously creating. Men with complete histories, credit cards, and bank accounts. Men with different names, but all sharing one face. His license yanked in a vengeful police action, Nebraska is without any P.I. credentials or contacts. This time when he goes underground, he is truly the naked eye.

In his most masterful novel to date, William J. Reynolds crafts an electrifying tale of insatiable greed, shocking violence, and dangerous loyalty. With The Naked Eye, Reynolds takes his deserved place at the top of the mystery genre.

Volume 6 in the Nebraska Mystery series.

Darius LeClerc, gunned down on an Omaha street, seems to be the victim of one of those random shootings with which the media have made us all too familiar. But having been appointed the young man’s unofficial guardian angel, the writer-detective Nebraska is not so sure the murder was unplanned.

He teams with Darius’ uncle, Elmo Lammers, to find the killer, and their quest leads them through the streets and alleys of an Omaha as alien and dangerous as a foreign land, teeming with fascinating, richly drawn people. The climax is as exciting as a classic western shootout, but with the gritty reality of today’s urban milieu.

Drive-By is a must-read for Nebraska fans and a glorious introduction for readers new to the series.

Additional works by William J. Reynolds, or including his stories