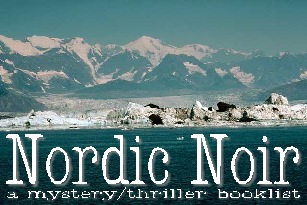 Call it “the genre literary movement ‘the Girl’ gave birth to”. Though that’s a bit misleading. Writers from Sweden, Norway, Finland and Iceland have been plumbing the psychological depths of killers and cops for quite some time — notably the writing team of Per Wahloo and Maj Sjowall, who combined for ten books featuring detective Martin Beck from 1965 to 1975. Henning Mankell’s “Kurt Wallander” series, which began in the early 1990s also made an impression. However, the category of crime writing now known as Nordic Noir, or Scandinavian Noir, or “scandi-noir”, didn’t truly gain a huge following outside of its European origins until Stieg Larsson’s The Girl With the Dragon Tattoo achieved explosive international fame in 2008, with over 27 million copies sold in 40 different countries.

The elements that contribute to make Nordic Noir a distinctive subgenre of mystery/thriller are as follows: streamlined language, downtrodden, world-weary, troubled and often anti-social heroes, and settings of cool, dark climates with strong anti-political, anti-government social attitudes. Most of these elements are common to the traditional American “noir” novels — think Dashiell Hammett, Raymond Chandler, James M. Cain, Patricia Highsmith, and Elmore Leonard. However, the one thing that differs in Nordic Noir from traditional American Noir is the somewhat scathing look at the contemporary Scandinavian socio-political world. For an intensely liberal, admired culture that enjoys a strong welfare state, there’s a great deal of dissatisfaction and frustration with government, big business and traditional organizations of power and influence, including law enforcement! In addition to Stieg Larsson (who died in 2004, but whose series has been continued by David Lagenkrantz) and Henning Mankell (whose deeply-troubled protagonist Kurt Wallander has been successfully interpreted on television by Kenneth Brannagh), some of the key authors in this increasingly popular new literary category are: Arne Dahl, Ake Edwardson, Karin Fossum, Arnaldur Indridason, Lars Kepler, Camilla Lackberg, Jo Nesbo, Hakan Nesser and Helene Tursten, though these just scratch the surface.

“Nordic Noir” is also a style of television drama, whether adapted from an existing book (or series) or written originally for the screen. Most of these series are produced for the countries in the Nordic region, and end up being exported to English-language markets in either dubbed or subtitled versions. Significant entries in the “Nordic Noir” category of television shows include: The Bridge, The Killing, Bordertown, Trapped, Wisting, Borgen, Wallander, The Valhalla Murders, and many more.

Here are links to a couple of excellent recent articles about the fundamental elements and best-known authors of what has become known as Nordic Noir: “Inspector Norse” in The Economist, March 11 2010 and Excellent article from Cleveland.com about Larsson opening the market.

All books in this list which are owned by Lincoln City Libraries are hotlinked to their entries in our library catalog, so that you may check on their current availability. The novels in this category are usually published in non-English languages, and often take a year or more to be translated for the English-speaking market. For the purposes of this list, we have focused only on Nordic Noir authors whose works have been translated into English. For a more comprehensive list, including authors whose works have not been translated, see the Wikipedia article on Nordic Noir. Some titles not owned by the libraries are included in this list due to their noteworthy nature, or their position as part of a series. If you see a title on this list that is not hotlinked to our collection, please consider ordering it through our Interlibrary Loan department.

Per Wahloo and Maj Sjowall (Sweden)

(stand-alone novels)
Fall of Man in Wilmslow: The Death and Life of Alan Turing (2015)

( Jerker Eriksson and Håkan Axlander Sundquist co-writing under this pseudonym)

Melancholia Trilogy
— Glass Bodies (2014)
(others not yet translated)

(also the author of several stand-alone novels, but mostly “magical realism”, not mystery/suspense/thriller)