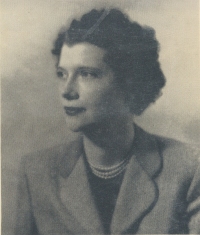 A List of Works by Nebraska Author
Patricia McGerr

A fourth-generation Nebraska daughter, Patricia McGerr made her literary reputation as the writer of seventeen novels (most of them mysteries, but a few telling stories of women of the early Catholic Church), and more than fifty short stories. She won an Ellery Queen Mystery Magazine/MWA prize for her 1968 story “Match Point in Berlin,” the Grand Prix de Litterature Policiere in 1952 for her 1951 novel Follow, As the Night, and her first novel, Pick Your Victim (1946), was selected as one of the Fifty Classics of Crime Fiction, 1900-1950.

Although she was born in Falls City, Nebraska, her family settled in Lincoln, where McGerr graduated from UN-L with a Bachelor of Arts. Her mother was one of the seven Dore sisters, well known in Lincoln, and this is alluded to jokingly in the title to one of her first books, The Seven Deadly Sisters (1947). After graduation, Patricia and her three sisters moved to Washington, D.C. and eventually New York City.

Earning a masters in journalism at Columbia University in 1937, she worked in public relations and as an assistant editor of an industry magazine in New York City. In her thirteenth novel, she had finally reclaimed her full first name — Patricia. “My publisher thought that the name ‘Pat’ sounded masculine and many male readers of mysteries would be put off by a woman author of such fiction unless she were a Mignon Eberhart or an Agatha Christie.” A television series, based on McGerr’s recurring character, Selena Mead, starring Polly Bergen, was planned for CBS Television in 1965-66 but never got to the air. Patricia McGerr died May 11, 1985 in Bethesda, Maryland, at the age of 67.

Additional information about Patricia McGerr can be found at the following Web sites:

This list is not complete, and will be added to as details about more of McGerr’s stories become available — if you know of any stories not listed here, we encourage you to contact us at the e-mail address at the bottom of this page! The vast majority of Patricia McGerr’s (a.k.a. Pat McGerr’s) short stories appeared in Ellery Queen’s Mystery Magazine — abbreviated EQMM in the list below. McGerr had one recurring sleuth — Selena Mead — noted with [SM] in the list below.