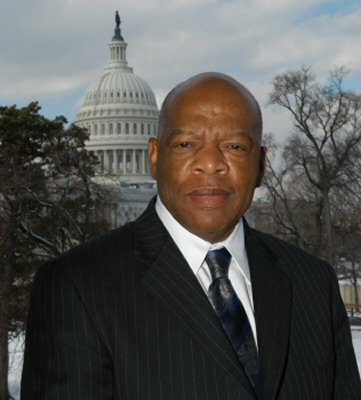 With the passing of Congressman John R. Lewis, of Georgia, on July 17th, 2020, the Lincoln City Libraries would like to invite you and your family to learn about the life and wisdom of this icon of the American Civil Rights movement.

These materials and more are available for physical check-out, or through our digital downloads collection. Library staff will be happy to assist you in accessing them.

Feb 21 1940 — Born in rural Troy, AL, the son of impoverished black sharecroppers
1959 — Inspired by the life and work of the Rev. Martin Luther King, Jr., takes part in workshops on non-violent confrontation, while in college in Nashville, TN – later participates in sit-ins and mass meetings
1961 — Participates in the early Freedom Rides, that protested racial segregation in the South
1963 — While serving as chairman of the Student Nonviolent Coordinating Committee, works in Selma, AL helping black people register to vote; after helping to organize Rev. King’s March on Washington, Lewis is arrested for the first of more than 40 times, for his civil rights activism in Selma
Mar 7 1965 — On what became known as Bloody Sunday, Lewis is beaten by an Alabama State Trooper, while trying to lead nearly 600 voting rights activists from Selma to Montgomery, AL. Spends two days in the hospital; in late March 1965, joins thousands of protestors on the Selma-to-Montgoery march for voting rights
1968 — Marries Lillian Miles, and remained together with her until her death on December 31, 2012; they have one child, son John-Miles Lewis
1971 — Lewis is installed as the executive director of The Voting Education Project
Apr 5 1977 — Although Lewis loses his first Congressional run to a popular caucasian candidate, he is later appointed by President Jimmy Carter to run Action, a federal volunteer agency
Oct 6 1981 — Lewis is elected to the Atlanta City Council, a position he holds until 1986
Nov 4 1986 — Elected to the United States Congress, representing Georgia’s 5th District (primarily Atlanta); re-elected 16 times, most recently in 2018 – only once in all that time did he receive less than 70% of the vote
2001 — Receives the John F. Kennedy Profiles in Courage Award for his lifetime of achievements
Apr 27 2009 — Lewis is one of a handful of protesters arrested in Washington, D.C., at the Embassy of Sudan, protesting the expulsion of aid works during a humanitarian crisis
2011 — Receives the Presidential Medal of Freedom, the U.S.’ highest civilian honor, presented to him by President Barack Obama
Mar 8 2015 — Commemorates the 50th anniversary of “Bloody Sunday”, in Selma, with Presidents and thousands of others in attendance
Jun 22 2016 — Is one of the leaders of a “sit-in” on the floor of the United States House of Representatives, protesting inaction on gun control legislation
Dec 29 2019 — Reveals that he has been diagnosed with advanced pancreatic cancer
Jul 17 2020 — Rep. John Robert Lewis dies, at the age of 80

Across That Bridge: Life Lessons and a Vision for Change
by John Lewis [Biography Lewis]

Walking With the Wind: A Memoir of the Movement
by John Lewis [323.4 Lew]

John Lewis: Get in the Way
[DVD Biography Lewis]

Give Us the Ballot: The Modern Struggle for Voting Rights in America
by Ari Berman [324.52 Ber | Hoopla Digital Audio] 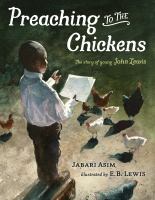 Preaching to the Chickens: The Story of Young John Lewis
by Jabari Asim [j Biography Lewis]

John Lewis in the Lead: The Story of the Civil Rights Movement
by James Haskins [j323.4 Has] 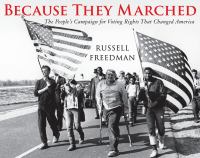 Because They Marched: The People’s Campaign for Voting Rights That Changed America
by Russell Freedman [j323.4 Fre] 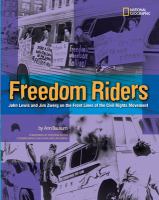 “Go out there, speak up, speak out. Get in the way. Get in good trouble. Necessary trouble, and help redeem the soul of America.” — John Lewis at the Selma Commemorative March, March 1, 2020