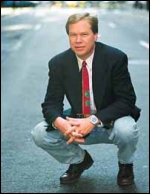 A list of works by Nebraska author
Richard Dooling

Richard Dooling was born in Omaha, Nebraska. He received his B.A. from St. Louis University in 1976 and, in 1979, began working as a respiratory therapist in intensive care units. After traveling for over a year in Europe and Africa, he went back to law school at St. Louis University, where he was editor in chief of the Law Journal. He practiced law at Bryan Cave LLP in St. Louis for four years. And returned to Bryan Cave in 1999, where he is Of Counsel.

Dooling’s first novel, Critical Care, was made into a film directed by Sidney Lumet. His second novel, White Man’s Grave, was a finalist for the 1994 National Book Award, movie rights optioned by Lawrence Bender, the producer of Pulp Fiction, Good Will Hunting, and Anna & The King. Dooling’s third novel, Brain Storm was optioned by writer, director, and producer, Alan J. Pakula, the director of All The President’s Men, Sophies Choice, and Presumed Innocent among many others.

Richard Dooling is also the author of Blue Streak: Swearing, Free Speech, and Sexual Harassment, a collection of essays on the first amendment and the politics of swearing.

Dooling’s short fiction has appeared in Esquire Magazine, The New Yorker, The L.A. Times, and The National Review. He also contributes op-ed pieces to the New York Times, the Wall Street Journal, and the National Law Journal. In 1999, his Diary of an Immortal Man [Esquire magazine] was a finalist for the National Magazine Award.

He currently lives in Omaha, Nebraska with his wife Kristin and their four children. From there, he commutes online to Bryan Cave, LLP in St. Louis, where he specializes in developing Web-based legal products.(Additional information about Richard Dooling can be found at the following Web sites:)

A collection of essays on the first amendment and the politics of swearing.

This book was written as a tie-in to the 2004 television mini-series Stephen King’s Kingdom Hospital. It is a prequel to the story told in the mini-series, but can also stand on its own.