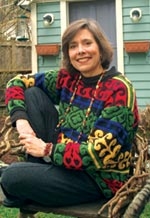 A list of works by Nebraska author
Stephanie Kallos

A native of Lincoln, Stephanie Kallos graduated from Lincoln East High School in 1973 before attending the University of Washington’s Professional Actor Training Program, where she graduated in 1982. Kallos spent nearly twenty years as a stage actor, teacher and vocal coach before switching career paths to become a writer. Her debut novel, Broken For You, came out in 2004, to both critical and reader acclaim.

She has been nominated for the Quill Award “Debut Author of the Year,” and her short fiction has been nominated for the Raymond Carver Award, and a Pushcart Prize. She is the author of Broken For You (Grove Press, 2004), her first novel, which was chosen as a book club selection of NBC’s Today Show, and which also won the Pacific Northwest Booksellers Association Award. Her second novel, Sing Them Home, was released in late 2008 (with a 2009 copyright). According to the biography on her own web site, Stephanie has lived in various locations over the years (with more than one stint in Lincoln). Stephanie, her husband, Bill Johns, and their two sons currently live in the Seattle area.

Additional information about Stephanie Kallos can be found at the following Web sites:

This list is believed to be incomplete, but will be updated as additional information becomes available. See the “last updated” link at the bottom of this page to determine how recent this information currently is.