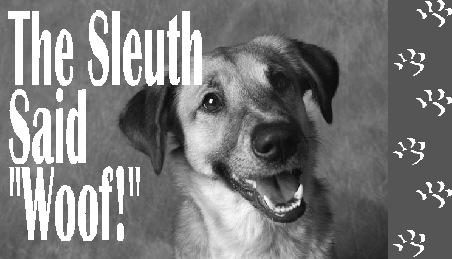 Dogs or Dog-Lovers as Sleuths

Man’s Best Friend can sometimes be a detective’s best assistant — why let the cats have all the fun?! Check out these authors with ongoing mystery series starring, or prominently featuring, canines as part of their casts of characters.

All series in this list of which one or more volumes are currently owned by Lincoln City Libraries are hotlinked to their entries in our library catalog, so that you may check on their current availability. Some series not owned by the libraries are included in this list due to their classic or popular nature. If you see a series on this list that is not hotlinked to our collection, please consider ordering it through our Interlibrary Loan department.

Starring Olivia Limoges and Captain Haviland, her Standard Poodle, who solve mysteries with the help of a writing club.

This series, featuring a veterinarian, frequently involves dogs in the book plots.

Brandy Borne and her mother are small-town antiques dealers along the Mississippi River. Brandy’s shitzhu, Sushi, occasionally features in the stories.

Raine Stockton, a dog trainer and the ex-wife of a deputy sheriff had stopped volunteering for Search and Rescue work after a tragic loss, but now she reluctantly returns to active duty — along with a young and inexperienced Golden Retriever named Cisco.

Dr. Jessica Popper is a rural veterinarian, who makes house calls. Lou is her one-eyed Dalmatian, and Max is her tailless Westie, and they often help her stumble across murder mysteries.

P.I. Rachel Alexander is accompanied by her formidable canine partner, Dash, on cases throughout the New York City area.

Tucker the Corgi is a regular feature of this series.

Jane’s sidekick is her Pug, Binks.

Thea Browning is the heroine of this series, set in Charleston, South Carolina. Her dog, Earl Gray, occasionally features in the stories.

Amateur sleuth Leigh Koslow occasionally fills in as a tech at her dad’s veterinary office, and several of her other escapades feature animals, including dogs.

Film teacher Jackie Walsh is the sleuth, and rescued ex-police dog Jake (a German Shepherd) is her canine companion, in this series of amateur detective novels.

Dixie Hemingway happens to be a pet sitter, who’s also an ex-cop. Trying to leave the world of law enforcement behind, Dixie sometimes can’t ignore the mysteries her furry clients uncover.

Holly is a dog trainer, and writes for a dog-related magazine, so is constantly surrounded by dogs.

The writing team known by the pseudonym Waverly Curtis is behind this series, featuring Pepe the Chihuahua (and his owner), who solve crimes.

Millie the Cocker Spaniel, shows up next to the dead body in the first of these cozy mysteries, and gets adopted by retired schoolteacher (and sleuth) Mary McGill.

Mackenzie Sullivan is a recently retired Irish cop from D.C. Whiskey is his fast-food-loving Irish Wolfhound. Sullivan is settling into his new role as a private eye, after years on the force.

Lucy Mathews is a crime reporter turned antiques dealer in this series, in which she is assisted by her somewhat stubborn malamute Kiska.

Mandy Bell is a midwestern veterinarian, who keeps stumbling across mysteries she has to solved with her border collie, Lyle.

Beans is the sleuth’s English Bulldog.

Randolph, a plump, poetry-loving black Labrador Retriever, is the sleuth in this series set in Manhattan. Harry is Randolph’s hapless human owner…whom Randolph has to train to help him solve the mysteries that his superior canine intellect frequently encounters!

The Vintage Kitchen series features Jaymie Leighton, a collector of vintage cookware and cookbooks, and her three-legged Yorkie Poo, Hoppy.

John Cunningham is the owner and manager of Three Oaks Kennels, and a dog-lover in his own life. These Scotland-set mysteries are classic amateur detective tales.

Jessie Arnold is a dog-sled racer in Alaska, and her mysteries invariably involve her beloved Alaskan sled dogs.

Maurice, a cynical cat, and Bouncer, a shaggy dog, assist bumbling Reverend Francis Oughterard in extricating himself from the mysteries in which he invariably finds himself a suspect!

Richard Houston
The Books to Die For mystery series [2012-present]

Amateur detective and former software engineer Jake Martin, and his golden retriever, Fred, solve mysteries around his mountain home outside of Denver.

Veterinary technician Carrie Kennersly takes over the property next door to her office to turn it into a bakery for her popular dog biscuits, and mystery hijinks ensue. Featuring a rotating batch of dogs.

Formerly an L.A. lawyer, Kendra Ballantyne is now a freelance pet sitter, who keeps stumbling across one murder after another while taking care of other peoples dogs and cats.

Lauren Vancouver is the head of a Los Angeles “no-kill” animal shelter, and rescued dogs are often a focal point in the mysteries she solves.

Rory Chasen becomes the manager of the Lucky Dog Boutique in Destiny, CA, a town where everyone lives their lives by believing in superstitions..

Jack Fielder is a dog trainer, ex-cop, and behavioral specialist. Medical Examiner Jamie Cuttler is his “main squeeze.” And his cases usually involved dogs — either his own or his clients’.

In the Paw Enforcement series, Megan Luz is a police officer in Fort Worth, who solves cases with her K-9 partner, Bright.

Jo Beth Sidden breeds and trains bloodhounds for police work. Sometimes she gets a little close to her work subjects.

Maggie Singer is the owner of The Seven Year Stitch in Tallulah Falls, Oregon. Her Irish Wolfhound, Angus, figures prominently in the plots, as she teaches embroidery to the villagers and solves crimes on the side.

In this supernatural mystery series, Deirdre “Foxtrot” Lancaster teams up with the telepathic ghost of her dead cat Tango, an ectoplasmic dog named Tiny (who can change breeds with merely a shake of his tail), and other otherworldly animal spirits, to solve murders in the “real world”.

“Miss Ruffles”, a very wealthy woman’s dog, inheritcs the woman’s estate upon her death. And then the mysteries begin.

Dog walker Ellie Engleman has an unusual ability — she can read the minds of her canine clientle. Which comes in handy, since the dogs under her care seem to sniff out a variety of crimes!

Allie Babcock is an intrepid dog therapist, with a knack for sleuthing. And her doggie patients usually have owners who are hip-deep in crises and crimes.

Birdie Gaux is the young girl, and Bowser is the friendly mutt she’s adopted, and they live on the edge of the Louisiana swamp. Bowser has to use his impressive “sniffing” abilities to help Birdie as she gets involved in mysterious situations.

Bernie’s the human — a private eye, and Chet’s the dog – a mixed-breed mongrel. Chet’s also the narrator for us, the audience, told with a dog’s typical short-term attention span. Hilarious and heart-warming, and solid mysteries! Set in Arizona, although later volumes have the duo traveling outside of “the valley”.

LeAnne Hogan, a deeply damaged female soldier home from the war in Afghanistan, becomes obsessed with finding a missing girl, and gains an unlikely ally in a stray dog, and encounters new perils beyond the combat zone.

Opera singer Max Bravo stars in this new series, set in San Francisco, which has thus far featured dogs prominently in the plots!

Defense attorney Andy Carpenter has a lot of uncertainty and unpredictability in his life. One source of stability for him is his beloved Golden Retriever, Tara.

The Kate Shugak series is set in Alaska, and among Kate’s large cast of regular supporting characters is Mutt, a half-wolf/half-Husky, who serves as part of Kate’s emotional safety blanket.

The Jillian Bradley mystery series features a gardening columnist and her Yorkie, Teddy.

This series features a golfing-accountant sleuth and her sidekick, Madonna (a rather huge St. Bernard).

Elvis is a basset hound who’s convinced he’s the reincarnation of the King of Rock ‘n’ Roll, guarding the Eternal Rest Funeral Home and Callie Valentine Jones, his human mistress with a penchant for trouble.

Facing tragedy and scandal in her own life, ex-Army major Holly Barker takes a job as the deputy chief of police (and ultimately the Chief) in rural Orchid Beach, Florida, where she and her trusty Doberman, Daisy, become caught up in webs of crime and conspiracy.

Whiskey Mattimoe is a recently-widowed realtor, trying to adjust to the single person’s life in her mid-thirties. Abra is her adorable, yet kleptomaniac, Afghan Hound. Let the humorous mystery-solving begin!

Elsie “Beanie” McBean is an investigative reporter in Lake Tahoe, and Cruiser is her beloved companion, a Basset Hound. It’s amazing the kind of trouble a reporter can get into!