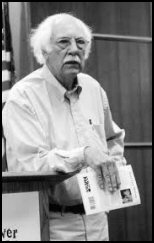 William Charles “Bill” Kloefkorn was a Nebraska poet and educator based in Lincoln, Nebraska. He was the author of over 30 collections of poetry, two short story collections, a collection of children’s Christmas stories, and four memoirs. His individual poems have appeared in Prairie Schooner, Georgia Review, Poet & Critic, and many other publications.

Kloefkorn was born in Attica, Kansas on August 12, 1932, where he graduated from Attica High School and married his high school sweetheart Eloise Ann in 1953. Bill attended Emporia State University in Emporia, KS, where he obtained a Bachelor’s degree in 1954. He served in the military, commanding an anti-tank assault platoon as a Lieutenant in the U.S. Marine Corps. Following his service, he taught high school for several years at Ellinwood High School in Ellinwood, KS. He returned to Emporia State University to get his Master’s degree, and did additional graduate work at the University of Kansas and the University of Nebraska–Lincoln. For a time, he taught in the English Department at Wichita State University, then Kloefkorn moved to Lincoln in 1962 and taught at Nebraska Wesleyan University there until his retirement in 1997; he continued to teach part-time until 2002, and still held professor emeritus status at NWU at the time of his death in 2011.

Throughout his decades as an educator, and even into his retirement years, Kloefkorn continued to serve as a writing mentor to thousands of students. In the early 1970s he initiated Nebraska’s poets-in-the-schools program, talking and writing with young students throughout the state. “Not many things,” he said, “are more important or more satisfying than are classrooms filled with wide-eyed, vibrant students who are eager to learn and to tell stories by way of the written word.” A new elementary school in the southeast part of Lincoln, NE is named after Kloefkorn and opened in the Fall of 2012.

In 1982, Kloefkorn was named the Nebraska State Poet by proclamation of the Nebraska Unicameral. (In 1921, the Nebraska Legislature permanently bestowed the title of Poet Laureate of Nebraska on John Neihardt, who died in 1973. A successor to this official title has not been named since 1973.) Kloefkorn died in Lincoln, Nebraska on May 19, 2011. He and his wife, Eloise, had four children and numerous grandchildren.

Readers looking for a complete listing of Kloefkorn’s poetry may have to do a little research on his recent output, however the 1994 book Burning the Hymnal, included a complete bibliography of his published poems through early 1993.

In addition to his many literary honors, Kloefkorn was known to boast that he won first place in the 1978 Nebraska Hog-Calling Championship.

The Jane Pope Geske Heritage Room of Nebraska Authors has copies of numerous Kloefkorn books in various editions. These are available for Kloefkorn scholars to study during the Heritage Room’s regular hours. Bill Kloefkorn took part in various recorded readings over the years, and you will find numerous other items in the library collection associated with him by doing either Subject — or Author — searches in the library catalog under “Kloefkorn, William.”