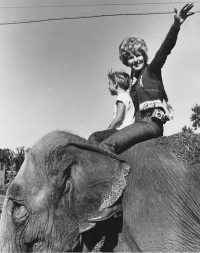 Our Guest Reviewer for May 2008 is Leta Powell Drake, long-time Lincoln television and stage personality. Leta has a lifetime career in broadcast television as host, producer, writer, announcer and program director. She has acted in more than 100 plays and 2 movies. She is a member of the Screen Actor’s Guild and has served on the boards of directors of CFPA, UNL Alumni Association, Lincoln Community Playhouse, Theatre Arts for Youth, YMCA and The Salvation Army. Her most recent position has been Director of Development and Community Relations for The Salvation Army. Leta received her MA in Theatre Arts in 1967. She received her BA in Speech and English from the University of Minnesota.Leta is a frequent library patron, and when asked to contribute a review to the BookGuide Bulletin, sent us the following:

Water for Elephants
by Sara Gruen

“There is good reason why Water for Elephants has been a best seller since the 2006 release. This is story-telling at its best. Set in the grim reality of the Great Depression of the 1930’s, Jacob Jankowski, now in a nursing home at age 90 or 93 — he doesn’t like it there — shares his memories of how and why, as a young man, he ran away to join the Benzini Brothers Most Spectacular Show on Earth — a far cry from the Ringling Brothers Greatest Show on Earth. Water for Elephants is a love story — a three ring circus of grand illusion. The reader rides the circus train and discovers the hierarchy of circus workers and performers; the brutalities of circus life, not only for the animals but also for the people who work the circus. We become voyeurs, peeping behind the curtains of the side show into the lives of the freaks and the misfits who try as best they can to earn a living. 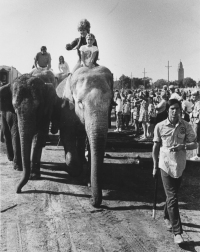 With twenty five percent of the American population unemployed during the depression, the circus provided work when jobs were hard to come by. It was a big deal when the traveling circus came to a small town. For a nominal fee, the circus offered a few exciting hours of distraction from their often drab lives. It was important to announce the arrival of the circus when the train brought them to town; unloading the animals as the performers, dressed in their glittering costumes, made their grand entrance by riding the elephants to the tent location, The train arrival was of particular interest to me, as I had the good fortune to ride circus elephants on two occasions from the train station to Pershing Auditorium when the circus came to Lincoln. People lined the streets in 1987 to watch Mayor Roland Luedtke, Helen Boosalis and Kay Orr ride their elephants as they campaigned for the office of Governor of the State of Nebraska — as if riding an elephant was an indication of their ability to guide the ship of state or the city. Riding an elephant is harder than it looks. It’s not like riding a horse. The elephant’s neck is so large, you cannot grip it with your knees. All you can do is spread your legs as wide as they will go and hang on for dear life to the thick rope around the animal’s neck. Elephants are so large ,you quickly become aware that it is a long way down to the pavement if you fell off as they ambled along. Fortunately, none of us were unseated. And what would a circus be without an elephant? Rosie the elephant plays a central role in Water for Elephants. Jacob becomes the vet for the circus and is the only person who can communicate with Rosie. 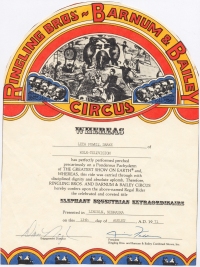 I was intrigued that the author is a woman- telling a man’s story. Sara Gruen just happened to see a vintage photo of a circus in a newspaper. She ordered the book of photography and got hooked. Gruen spent the next four and one half months researching circus history. Several pictures are included in the book. Perhaps I should not be surprised that a woman could tell this story. Gruen writes with tender and thoughtful insight about Jacob’s life and his love for both animals and a circus performer. Another plus is the unexpected conclusion of the story. Fortunately, Water for Elephants is available in large type for the visually impaired. Reading Water for Elephants may not make you want to run away and join the Cirque de Soleil, but it will be time well spent considering it.”