Starting in April 2002, and continuing through November 2018, a panel of library staff members have appeared somewhat regularly on Cathy Blythe’s Problems and Solutions program on radio station KFOR 1240 AM & 103.3 FM in a segment called “Book Chat,” sharing information about books, literacy and library programs. Here is a list of the books discussed on the shows during 2015:

From the award-winning author of Half of a Yellow Sun, a dazzling new novel: a story of love and race centered around a young man and woman from Nigeria who face difficult choices and challenges in the countries they come to call home.As teenagers in a Lagos secondary school, Ifemelu and Obinze fall in love. Their Nigeria is under military dictatorship, and people are leaving the country if they can. Ifemelu— beautiful, self-assured— departs for America to study. She suffers defeats and triumphs, finds and loses relationships and friendships, all the while feeling the weight of something she never thought of back home: race. Obinze— the quiet, thoughtful son of a professor— had hoped to join her, but post-9/11 America will not let him in, and he plunges into a dangerous, undocumented life in London.Years later, Obinze is a wealthy man in a newly democratic Nigeria, while Ifemelu has achieved success as a writer of an eye-opening blog about race in America. But when Ifemelu returns to Nigeria, and she and Obinze reignite their shared passion— for their homeland and for each other— they will face the toughest decisions of their lives.Fearless, gripping, at once darkly funny and tender, spanning three continents and numerous lives, Americanah is a richly told story set in today’ s globalized world: Chimamanda Ngozi Adichie’ s most powerful and astonishing novel yet. [Note: This is the 2015 selection for One Book – One Lincoln]

The acclaimed comedian teams up with a New York University sociologist to explore the nature of modern relationships, evaluating how technology is shaping contemporary relationships and considering the differences between courtships of the past and present.

The Life-Changing Magic of Tidying Up: The Japanese Art of Decluttering and Organizing
by Marie Kondo [648 Kon]

This best-selling guide to decluttering your home from Japanese cleaning consultant Marie Kondo takes readers step-by-step through her revolutionary KonMari Method for simplifying, organizing, and storing.

Twenty years after the trial of Tom Robinson, Scout returns home to Maycomb to visit her father and struggles with personal and political issues as her small Alabama town adjusts to the turbulent events beginning to transform the United States in the mid-1950s.

Thrill Me
by Susan Mallery [Mallery]

Maya Farlow learned the hard way to depend only on herself, so when she fell too deeply for the bad-boy charms of Del Mitchell, she did the only thing she could–she ran. Stunned, Del left Fool’s Gold to make his name and fortune in extreme sports. Now ten years later, May’s been hired to promote her hometown’s new slogan, The Destination for Romance. The celebrity spokesman is none other than Del, the man she dumped but never forgot.

On a winter day in 1903, in the Outer Banks of North Carolina, the age of flight began with the first heavier-than-air, powered machine carrying a pilot. McCullough tells the surprising, profoundly American story of Wilbur and Orville Wright: men of exceptional courage and determination, and of far-ranging intellectual interests and ceaseless curiosity, much of which they attributed to their upbringing. Wilbur was unquestionably a genius. Orville had such mechanical ingenuity as few had ever seen. McCullough draws private diaries, notebooks, scrapbooks, and more than a thousand letters from private family correspondence to tell the human side of the Wright Brothers’ story, including the little-known contributions of their sister, Katharine.

The Martian
by Andrew Weir [Weir]

Six days ago, astronaut Mark Watney became one of the first people to walk on Mars. Now, he’s sure he’ll be the first person to die there. After a dust storm nearly kills him and forces his crew to evacuate while thinking him dead, Mark finds himself stranded and completely alone with no way to even signal Earth that he’s alive–and even if he could get word out, his supplies would be gone long before a rescue could arrive. Chances are, though, he won’t have time to starve to death. The damaged machinery, unforgiving environment, or plain-old ‘human error’ are much more likely to kill him first. But Mark isn’t ready to give up yet. Drawing on his ingenuity, his engineering skills–and a relentless, dogged refusal to quit–he steadfastly confronts one seemingly insurmountable obstacle after the next. Will his resourcefulness be enough to overcome the impossible odds against him? 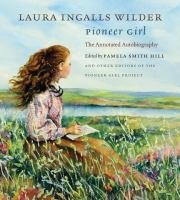 Hidden away since the 1930s, Laura Ingalls Wilder s never-before-published autobiography reveals the true stories of her pioneering life. Some of her experiences will be familiar; some will be a surprise. Pioneer Girl re-introduces readers to the woman who defined the pioneer experience for millions of people around the world.

Life Could Be Verse: Reflections on Life, Love and What Really Matters
by Kirk Douglas [Biography Douglas]

The legendary actor Kirk Douglas has written several previous autobiographical works, of which this is his latest, released in 2014, the year Douglas turned 98 years old. This slim volumes is a marvelously nostalgic look back at some of the highlights of both his acting career and his life as a celebrity. Interspersed among the dozens of photos and person letters are examples of the poetry Douglas has written his entire life. He has particularly found poetry to be a good creative outlet since a stroke in 1996 left it difficult for him to speak. This is a wonderful snapshot of a life fully lived, and often in the public eye.

No amount of brownies can calm bakery owner Hannah Swensen’s nerves as she prepares for a trial about her role in a disastrous accident. When someone bludgeons the judge to death, Hannah must catch the killer if she hopes to clear her name and savor the sweet taste of victory. 18th book in the series. 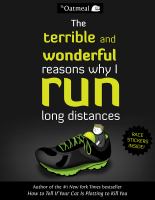 The Terrible and Wonderful Reasons Why I Run Long Distances
by The Oatmeal (a.k.a. Matthew Inman) [741.5 Inm]

Online cartoonist “The Oatmeal” applies his trademark sarcastic wit and occasionally grotesque artwork styles to a book that tackles a topic near and dear to the artist’s personal life. Inman took up the sport of long distance running several years ago in order to battle the negative health concerns of a lethargic and non-mobile lifestyle. He shares many of the things he’s learned about the life of a long-distance running here, complete with illustrations of the “blerch” character that follows him around, symbolizing the kind of fat, slovenly life he could easily be living if he’d just stop running. Inman isn’t trying to convert people to a running lifestyle, but his trenchant personal observations and bitingly satirical artwork may make you consider the benefits of getting out of your office chair and off of your couch more often.

Mary Beth Keane, named one of the 5 Under 35 by the National Book Foundation, has written a spectacularly bold and intriguing novel about the woman known as “Typhoid Mary,” the first person in America identified as a healthy carrier of Typhoid Fever. On the eve of the twentieth century, Mary Mallon emigrated from Ireland at age fifteen to make her way in New York City. Brave, headstrong, and dreaming of being a cook, she fought to climb up from the lowest rung of the domestic-service ladder. Canny and enterprising, she worked her way to the kitchen, and discovered in herself the true talent of a chef. Sought after by New York aristocracy, and with an independence rare for a woman of the time, she seemed to have achieved the life she’d aimed for when she arrived in Castle Garden. Then one determined “medical engineer” noticed that she left a trail of disease wherever she cooked, and identified her as an “asymptomatic carrier” of Typhoid Fever. With this seemingly preposterous theory, he made Mallon a hunted woman.The Department of Health sent Mallon to North Brother Island, where she was kept in isolation from 1907 to 1910, then released under the condition that she never work as a cook again. Yet for Mary — proud of her former status and passionate about cooking — the alternatives were abhorrent. She defied the edict.

Dead Wake: The Last Crossing of the Lusitania
by Erik Larson [940.451 Lar]

On May 1st, 1915, the Lusitania set sail on its final voyage. That it was sunk by a German U-boat will be news to few — and Larson’s challenge is to craft a historical narrative leading up to the thrilling, if known, conclusion, building anticipation in his readers along the way. To his credit, he makes the task look easy. Focusing on the politics of WWI, on nautical craftsmanship and strategy, and on key players in the eventual attack and sinking of the “fast, comfortable, and beloved” Lusitania, Larson once again illustrates his gift for seducing us with history and giving it a human face. Dead Wake puts readers right aboard the famous Cunard liner and keeps them turning the pages until the book’s final, breathless encounter.

Fifteen-year-old Elisabeth, “Sisi,” Duchess of Bavaria, travels to the Habsburg Court with her older sister, who is betrothed to the young emperor. But shortly after her arrival at court, Sisi finds herself in an unexpected dilemma: she has inadvertently fallen for and won the heart of her sister’s groom. Franz Joseph reneges on his earlier proposal and declares his intention to marry Sisi instead. Thrust onto the throne of Europe’s most treacherous imperial court, Sisi upsets political and familial loyalties in her quest to win, and keep, the love of her emperor, her people, and of the world.

You Might Remember Me: The Life and Times of Phil Hartman
by Mike Thomas [Biography Hartman]

In the wake of Saturday Night Live having celebrated its 40th anniversary just a few weeks ago, I enjoyed reading this frank and open biography of one of SNL’s greatest stars, Phil Hartman (which came out in late 2014). From his childhood growing up in Canada, to his struggles as a young artist, through his runs on SNL, The Simpsons and NewsRadio, this was a fascinating and brutally honest look at a complicated man. His ability to inspire laughter in so many of us is counterbalanced by the occasional moments of darkness in his own life, including those that led his wife to kill both Hartman and herself in 1998.