For several years, until February 2009, panelists gathered each Wednesday evening on KZUM 89.3 FM to discuss contemporary and classic literature. As described on the radio station’s internet page at that time, “BookTalk on KZUM 89.3 is a variety show about books and stories on KZUM, Lincoln’s community radio station. Booktalkers are the people who love to read and love to talk about what we read. We interview authors, review best sellers and classics, read excerpts, and talk about the Web sites that book lovers are haunting.” Several library staff members have served as guests or hosts of these literary discussions at various times. New episodes aired every Wednesday at 6:30 p.m. local time.

The following is a partial listing of books discussed on episodes of Booktalk during 2009, based on the information currently available. We will attempt to fill in the gaps in this listing as additional information is made available to us.

Title Discussed: The Man With the Strange Head and Other Early Science Fiction Stories
by Miles J. Breuer (Breuer)

Gathered here for the first time are Lincoln, Nebraska native Miles J. Breuer’s first publication, “The Man with the Strange Head”; his neglected dystopian novel Paradise and Iron (appearing here in book form for the first time); stories such as “Gostak and the Doshes” and “Mechanocracy”; and Breuer’s essay “The Future of Scientifiction,” one of the early critical statements of the genre. Also included are some of the author’s letters from the Discussions column of Amazing Stories. Much of what we know as science fiction saw the light — and found its themes, styles, and modes — in the science fiction magazines of the early twentieth century. It was in these magazines of the 1920s and 1930s that Breuer often led the way. Breuer himself found his inspiration in the work of H. G. Wells and in turn influenced science fiction masters from Jack Williamson to Robert A. Heinlein. The Man With the Strange Head and Other Early Science Fiction Stories collects the best work of this pioneer of the genre.

Title Discussed: How to Lose Your Faith in Divinity School
by Lee Tasey (not currently in the libraries’ collection)

Tasey talks with Kit and John Keller about his second book, How to Lose Your Faith in Divinity School. A midwestern orthodox Catholic goes away to divinity school in Boston and finds himself on a journey to crypto-atheism. The book, at times a laugh-out-loud read, recounts his struggles as he wrestles with g-o-d. 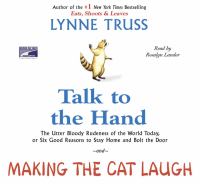 Title Discussed: Talk to the Hand: The Utter Bloody Rudeness of the World Today, or, Six Good Reasons to Stay Home and Bolt the Door
by Lynne Truss (Compact Disc 395 Tru — libraries currently only own this as a book-on-cd)

“Talk to the hand, ’cause the face ain’t listening,” the saying goes. When did the world stop wanting to hear? When did society become so thoughtless? It’s a topic that has been simmering for years, and Lynne Truss says it’s now reached the boiling point. Taking on the boorish behavior that for some has become a point of pride, Talk to the Hand is a rallying cry for courtesy. Like Eats, Shoots & Leaves, Talk to the Hand is not a stuffy guidebook, and is sure to inspire spirited conversation.

Other past KZUM Booktalk pages: