The Best of Peter David
submitted in July 2008 by BookMan

Some of my favorites (at least that the library owns…they don’t have all of this author’s works) by SF/Fantasy author Peter David. He specializes in TV tie-ins.

The Captain’s Daughter
A Captain Sulu story from Star Trek.

(No longer in the libraries’ collection.) 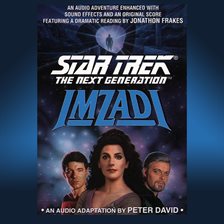 Imzadi
A very emotional Star Trek the Next Generation novel.

(Currently available from the libraries only in eAudiobook format.)

Knight Life
The King Arthur mythos, brought into modern times, with a great deal of humor.

The Long Night of Centauri Prime
An excellent Babylon 5 novel, first in a trilogy of original novels.

(No longer in libraries’ collection.)

(Currently available from the libraries only in eAudiobook format.)

Sir Apropos of Nothing
Silly fantasy, first in an ongoing series.

Vendetta
Perhaps one of the three or four best Star Trek the Next Generation novels yet written — ties events from the original Star Trek in to events in Next Gen.

(No longer in libraries’ collection.}