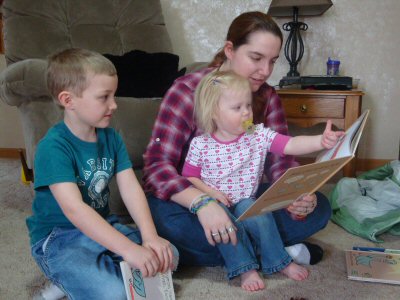 Our featured Reviewer for April 2011 is Carrie R. Carrie hasn’t been with the Lincoln City Libraries long, but has already worked at two branches. Her reviews have started showing up regularly on the Staff Recommendations pages of the BookGuide web site, and on the Staff Recommendations display at Bennett Martin Public Library. Here are some of her observations on the role of books and reading in her life, in her answers to our profile questions:

Since I’m not originally from Lincoln I didn’t know much about the LCL system before I got the job. Right now I’m an Aide at South Branch and I work in public service at Bennett Martin Public Library downtown. I’ve been at both branches since May 2010.

I’m a farmgirl, originally from Geneva, NE (population around 2500), but I moved to Lincoln to work here in the library system. I was an English major in college with a sociology minor and right now I’m in grad school getting my Master’s degree in Library Science. I’m the youngest of four children, the others are 11, 15, and 17 years older than myself so I was a bit of a surprise. As a kid I read a lot of fantasy — Harry Potter was big on my list – and mystery. The Westing Game by Ellen Raskin was the first mystery book I read and from then on I was hooked. I was also fascinated by ancient Egypt so I read anything I could find about the pyramids, pharaohs, hieroglyphics, temples, etc.

I’ve been a reader for as long as I remember, either reading for myself or having an adult read to me. I remember when I was a kid I picked up Carrie by Stephen King (from my library back in Geneva) because I was, of course, intrigued by its title. After reading it I was a bit scarred for life, but I think that was my first real adult novel. After that it was a landslide, listening to Lilian Jackson Braun books on tape with my sister, discovering the awesomeness that is James Patterson and his Women’s Murder Club series, reading The DaVinci Code because of all the controversy and writing a paper on it.

If ever there was a time in my life where I would consider myself an “active” reader it would be in college when I was an English major taking 3 or 4 literature classes at once. The people who have most inspired me to read would definitely be my college professors, having us read classics like Crime and Punishment by Dostoyevsky, The Awakening by Kate Chopin, A Farewell to Arms by Hemingway, then more recent novels like The Absolutely True Diary of a Part-Time Indian by Sherman Alexie, The Book Thief by Marcus Zuzak and The Hunger Games by Suzanne Collins

I think that books are extremely important, especially now that I’m working in the library system. I’m able to actually see their impact on kids and young adults. They need to know that there is entertainment out there besides television and video games.

I’m big into series, I like that it’s not just one book and then the story is over. So, that has a lot of impact when deciding what to read since I like reading things in order. I also get a lot of recommendations working here and I like to hear what the patrons have to say about books/DVDs/CDs/etc.

Getting the word out there about what great books we have in our system and how diverse our catalog is.

You get a lot interesting reading stories when you’re an English major. I took a Shakespeare class in college. At the end of the semester the professor divided us up into groups to present some of the books that we read. My group got Twelfth Night and instead of traditional acting we decided to mix it up and do the presentation in a Whose Line is it Anyway style. We did one scene as a soap opera, another as an E-True Hollywood Story, one scene was silent acting (lots of miming), and ended it with The Dating Game where everyone’s true identities were revealed. The professor loved it and gave us an A.

A friend and myself also did a talk show on The Iliad, “everything you need to know in twenty minutes or less as demonstrated with sock puppets” for another presentation.

Other than school stuff I’m a big fan of Dr. Seuss, I always watch the original animated movie of How the Grinch Stole Christmas and read the book on Christmas.

James Patterson is really my author recommendation for virtually anyone who asks about good mysteries. The awesome thing about him is that his writing is very diverse, he also does romance – Sam’s Letters to Jennifer – plus he writes for young adults with his Maximum Ride series, and now he’s branched out to history/nonfiction as well, check out The Murder of King Tut: the Plot to Kill the Child King!