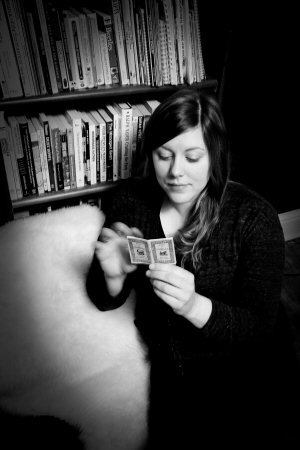 Our featured Reviewer for March 2011 is Glory B. Glory is a relatively new staff member at the Lincoln City Libraries, but her reviews have been showing up consistently on our Staff Recommendations displays and on the BookGuide web site. Reading has long been an important part of her life, as she indicates in her answers to our questions about books and reading:

I have been working with Lincoln City Libraries for a year primarily at Bennett Martin, but have dabbled in the branches. You may have seen me working a scanner and pushing in chairs at Gere, South or Walt too. Prior to Lincoln and LCL, I ‘grew up’ rather nomadically. I was born in Texas and raised in Chicago and Nebraska. I have also lived in Florida, England and South Korea. Growing up, (when internet was charged by the minute) the library was my Google. I spent a lot of my childhood in the nonfiction section of the library. I was very curious about the world and enjoyed pawing through foreign photo books and foreign language dictionaries. I still enjoy browsing the nonfiction section for a fresh buffet of ideas.

As a kid I would read before falling asleep every night. In elementary school I loved when the scholastic reader catalogue was passed out at school and begged my mom for my carefully circled selections. My ultimate score was a monthly subscription to the Babysitters Club series by Ann Martin. Over time I enthusiastically collected every single book along with baby sitters club stationary sent with 3 books each month. At that time, it was probably the only mail I received besides birthday cards (thus contributing to the excitement). I am still using up the stationary 15 years later. This wasn’t necessarily intellectually inspiring reading, but I can confidently say the Babysitters Club series sparked my general interest in recreational reading.

As far as books with content that strongly influences me, though, I’m a sucker for a good allegory. My top three current favorites would have to be Waiting for the Barbarians by J. M. Coetzee, Things Fall Apart by Chinua Achebe, and The Alchemist by Paulo Coelho.

I don’t think I’d be the person I am now without reading. When I’m not in school or taking a class, without reading it would be easy for me to suffer from thought atrophy. Especially if you’re from a sheltered or small town, reading is the cheapest, biggest and highest quality window there is.

Working at the library has put me in contact with all sorts of interesting covers. I also get recommendations from friends, family, coworkers and patrons. NPR, New York Times book review, and Amazon’s read-a-likes further lead me to interesting finds. Since starting at the library too, the LCL BookGuide is a great resource to sift through. I’m planning to start reading off a booklist I found on BookGuide to expand my horizons.

I’m not a very concise writer, but I enjoy the challenge of summing up what I’ve read in a paragraph or two. I like having the conversation with myself about what I’ve read through the review/recommendation process.

While living in South Korea I noticed the overwhelming popularity of The Little Prince by Antoine de Saint-Exupéry. The school I worked at happened to do a theatrical rendition of the book for the school play one year. Later I was invited out with a Korean friend to visit a “Little Prince Museum”, which was actually part of a French themed hotel compound. It was a rather odd combination of part book (Little Prince) appreciation museum, hotel, and all things France homage. It really exists!

Hands down: Michael Ende, a German fantasy and children’s literature writer. When the Never Ending Story movie came out, when I was a kid, I gushed over it for years (I’m not vouching for the film sequels, underwhelming to say the least). At the time I didn’t know the movie was adapted from Ende’s book. As it turns out, the film version encompasses a mere fraction of the story. The Never Ending Story in book form blew me away. Ende also wrote Momo, about a young girl taken care of by her community. Slowly her visitors trickle away. Thieves begin to steal people’s time. It’s a thoughtful story filled with beautiful metaphors for children and adults. Reading Ende is simply guaranteed to wake up your inner child, in a mature way of course.