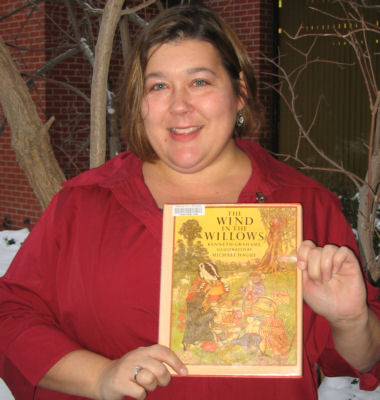 Our featured Reviewer for December 2007 was Lisa V. Lisa has worked for various branches of the Lincoln City Libraries, and ended her library career in 2020 at the Eiseley Branch, after stints at both the Bennett Martin Public Library downtown and the Gere Branch. In addition to providing the occasional review for the BookGuide web site, Lisa is one of the library “regulars” on episodes of KFOR’s Book Chat and KZUM’s Booktalk shows. Reading and sharing books with others is extremely important to Lisa, as she indicates in her answers to our profile questions:

I was born in Lincoln, and went to Dawes, St. Patrick’s and Pius High School. I’m a North Lincoln girl — our home was near Havelock, just a few blocks from the Anderson library. I practically lived there, so it really meant a lot to me that my first job with LCL was working at Anderson and Bethany libraries. I also spent several of my childhood years in Pittsburgh, Pennsylvania and Columbia, Missouri. I was always reading, but I also spent a lot of time outdoors. If there was a creek, or a marsh, or any decent climbing trees around I was perfectly content. One of my favorite childhood memories was my treehouse in Missouri. It was a favorite spot for reading, and I also taught several nests full of abandoned baby birds to fly from that tree. Luckily, they picked it up without needing an actual demonstration from me. The books I remember best from my early years were Put Me in the Zoo, The Pokey Little Puppy, and Three Pesos for Catalina. As I got older, I became pretty “horse-crazy”, so I read everything by Marguerite Henry about ten times.

I’ll give the standard answer — I don’t really remember NOT being able to read. I do remember being frustrated, at about the age of four, that I couldn’t tell time, even though I could read words. I thought they must somehow go together. I think the thing that most “made me a reader” was being an only child. I had lots of time to myself, and books made excellent companions. Also, my grandmother and my mother both encouraged me to pick up a book when I was bored. I remember so many books that made impressions on me, it’s hard to single any out. I really liked the “Tripod” series by John Christopher, and Zilpha Keatley Snyder’s The Egypt Game. I was definitely a Judy Blume fan, and loved the EarthSea trilogy by LeGuin. I still remember the first “grown-up” fiction I read, which was Mary Stewart’s The Crystal Cave, and the rest of her Arthurian Saga. I think I was about twelve when I read those. I also read a lot of non-fiction, and still do.

I guess they rank right up there with breathing. I would find it very difficult to live happily without books and music, and I’m always thankful that they are so readily available from so many sources. I don’t like to go anywhere for any length of time without a book and my Ipod. I’m still so amazed at people who can write well — to me, writing a good, compelling story is like doing magic. It’s kind of sad to think that no matter how much I read, I’ll never read all the books I want to. I love talking about books with library customers, friends, and on KFOR’s BookChat, and KZUM’s Book Talk show.

I’d like to say I have some great system for choosing my next read, but I really just wait till something catches my attention. I get a lot of great recommendations from my library customers, and I frequently steal ideas from the KFOR gang and my book group. I love LCL’s Books, Movies & More! newsletters, too. I would encourage anyone who likes to get good, targeted reading suggestions to sign up for those. Also, C-Span’s Book TV is invaluable as a resource. And sometimes, I just pick something up that looks interesting, without knowing much about it, and give it a try. It’s important to me to be an omnivorous reader — to read widely, and follow my sense of curiosity. Some of my very favorite reading experiences have happened serendipitously. Those are the best!

I like to share my enthusiasm for books with other people, and writing reviews is another way to do that. I also enjoy writing (anything but fiction), so reviews are a great way to exercise my writing skills. I know that there are people out there like me who are looking for that next great book, or DVD, or music CD, so I try to do my part to help them out. Writing reviews seems like a natural extension of the readers’ advisory part of my job. And, it’s a lot of fun!

That’s a really tough question. I want to convince people to read the author that’s just perfect for THEM. I’m always trying to find out what people are looking for in a reading experience, and then trying to find authors that are a great fit. I would like to see more people reading the works of Charles Dickens, though. He was such a keen student of human nature, and of life in general, and his characters are some of the most memorable in all of English literature-or any literature, for that matter. And I think everyone should check out at least some of Conan Doyle’s Sherlock Holmes stories, because they are just about the perfect read. I’m still amazed every time I re-read my favorites, because they have it all-mystery, suspense, intrigue, drama, romance, humor, valor-and they teach you how to think in a whole new way. What more can you ask for from the written word?