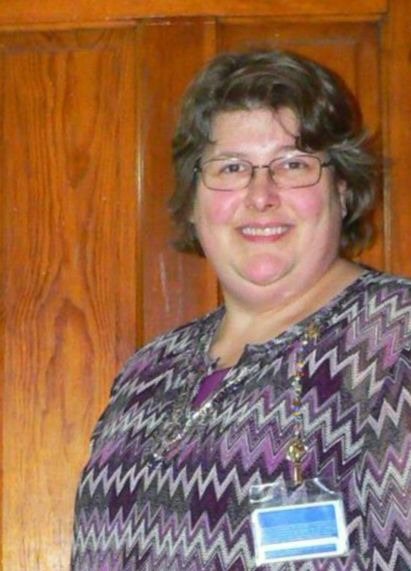 Our featured Reviewer for April 2018 is Marcy G.

Marcy has worked for Lincoln City Libraries for over 25 years, at three different branches, most recently at the South Branch Library. March is a regular presenter at the Bethany and Gere BooksTalks, and although she hasn’t reviewed too many individual books for our Staff Recommendations pages on BookGuide, you’ll find many of her booktalk booklists with good reading suggestions. For many years, Marcy was one of the library staff making regular appearances on the Book Chat episodes of KFOR’s Problems & Solutions. You’ll see many of her reading suggestions on our archive of KFOR Book Chat lists. Reading and books have long been an important part of her life, as she indicates in her answers to our following profile questions:

I was born and raised in Lincoln, NE. I had three older sisters who all read to me, my favorite being the little golden book The Monster at the End of this Book by Jon Stone, but once I learned to read, I was off. Two of my favorite books as a child were Outside by Andre Norton and Harriet the Spy by Louise Fitzhugh. I loved mystery and science fiction books, though, so some of the other series I read were Danny Dunn books by Jay Williams, Alfred Hitchcock and the Three Investigators by Robert Arthur, Mrs Pickerell books by Ellen MacGregor, and the children’s mysteries by Phyllis Whitney.

My Mom and Dad were both readers, my Dad could read a book in a day. My Mom was a slower reader, but she always had a book on her nightstand. So I have always loved books.

When I was in college I adopted a dog and began training her and soon began teaching dog training classes. The book that helped me to become interested in training in the first place was Mother Knows Best: The Natural Way to Train Your Dog by Carol Lea Benjamin. Her book was written clearly, with the reasons why explained. Many years later when a new type of dog training (Clicker Training) began to be popular, the book that helped me understand the concept and change how I train dogs was Lads Before the Wind: Diary of a Dolphin Trainer by Karen Pryor.

I look back at my life, and though I still love books and reading, my dogs and dog training have opened up a completely different world to me.

Books are still very important. I read two to three books a week. I find myself divided between reading fluffy fiction, cozy mysteries and romance novels and historical non-fiction, I like medical, disaster, and science history.

How do you select what books to read next? What formats do you prefer (book, ebook, audiobook, etc.)?

Occasionally I find them as I’m checking in books, an advantage of working in a library. Often I find reviews on goodreads.com, I have about 30 books on my “Want to Read” list right now. Sadly sometimes I have to relegate an interesting book to the “I’d like to read it, but it will never happen” list. Sometimes it’s because the writing isn’t up to snuff or because a reviewer made the book sound much more interesting than it actually is.

I like actual books, but I also read books on my Kindle or my phone. When I had a CD player in my car, I always listened to a book while I was driving.

What do you enjoy about writing book reviews/recommendations?

I really like getting people excited about reading the books I love. Reading is so much fun for me and I want everyone around me to enjoy it as well.

My first library memory was my Dad taking me to the University Place Library to return a late book. We went up to the front door and there was a sign on it that it was closed! My Dad then took us to the brand new, not even open, Victor E. Anderson Library. We put the book in the drop box, and my Dad lectured me on the way home about keeping track of library books.

Every summer, my Mom would take me and my sister to the library (Anderson Branch) once a week. If it was especially hot, we’d get to stop for an ice cream cone at the Goodrich Dairy next door afterwards.

I began working at Anderson as a Shelver in 1990, but soon moved to work at Gere as a Library Assistant, from Gere it was back to Anderson, and then to South as a Library Service Supervisor.

Though I loved books and listening to stories, learning to read was hard for me. No one knew I needed glasses, and I struggled to read on my own. I wasn’t one of the kids who learned to read before Kindergarten. It wasn’t until my first grade teacher Mrs. Holmes realized something was wrong. She suggested I be taken to an optometrist. Once I was fitted for glasses, reading became much easier and much more fun. I quickly caught up to my classmates.

My favorite website is www.stopyourekillingme.com, a site dedicated to mysteries and mystery series. They list books by author or main character, list the series in order, and have lists of upcoming releases in hardback and paperback.

It’s great for finding new authors, but it helps at work when a customer comes up and can’t remember an author. If they can tell me the main character was a police officer who became a blackjack dealer, I can find the name of the book.

And that’s just some of the great features, if you love mysteries you’ll want to explore this site!

I use GoodReads. It let’s me keep track of the books I’ve read, and want to read. I can add lists for myself, such as “Quit Reading.” They have updates which bring to my attention reviews my friends have written, but I can access reviews from other people. There are lists and recommendations if I need to look for a new book to read.

After saying that I love mysteries and historical nonfiction, I’m going off the rails and say Malcolm Gladwell.

His books are informative and entertaining and I always learn so much from him.