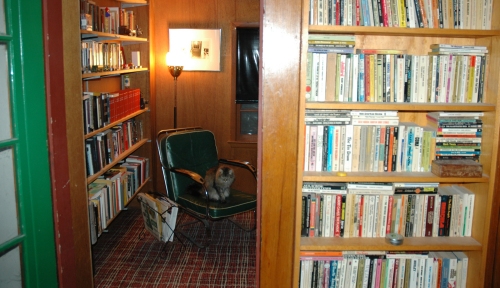 Our featured Reviewer for January 2008 was Matt N. At that time, Matt worked at the Bennett Martin Public Library downtown, although he has since transferred out to the Anderson and Bethany Branch Libraries; his reviews show up occasionally on our Staff Recommendations displays and on the BookGuide web site. Though not as frequent a reviewer as some of the other personalities that are represented in the pages of BookGuide, Matt was still happy to reply to our questions about his background and reading interests. Perhaps we can convince him to submit a few more reviews in the future! 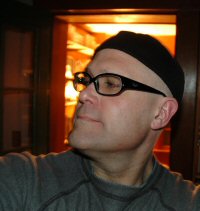 I was born out in Western Nebraska, Benkelman to be exact. My mother taught kindergarten in a town named Max, just outside of Benkelman. Max had a population of about 60 at the time I went to school there, probably a lot less people now. I get a kick out of hearing the name Max when NPR announces its translator stations…it’s always announced last. We moved to Waverly, Nebraska, just before I started first grade. My father got a job teaching Jr. High social studies, and my mother went back to school at UNL to finish her teaching degree — which she did, and she too began teaching in Waverly…only in the grade school.

When I was in fourth grade, we moved to Lincoln, and eventually bought a house in Bethany, just a block or so from the Bethany Library. I remember going to the library for the first time — Waverly didn’t have a public library — getting a library card, and signing up for the Summer Reading Program. I took home quite a stack of books that day, and by the end of summer I returned that same stack of books back to the library, having not read a one. However I did start to read Little Men. Too busy, I guess, playing baseball or trying to, that is. Wasn’t until I went to college that I developed a love of reading and collecting books and have enjoyed doing so ever since.

I come across a lot of titles that pique my curiosity during the course of a day working at the Loan Desk at Bennett Martin Public Library, a job I’ve had for…let’s just say a few years. I also enjoy hearing about books from friends and library patrons (some of which are both), an occasional perusal of the New York Times Book Review, and of course NPR.

Do you have any particular “favorite” authors, or authors you like to recommend to others?

Here’s a list of my literary heavy hitters: Ambrose Bierce, Joseph Heller, Camus, Aldous Huxley, Joseph Conrad, Chekov, Dostoyevsky, and last but not least, William Faulkner, who happens to have the same birthday as myself, September 25th. I thought that was pretty cool when I found that out. Well, there you have it in a nutshell, so to speak. By the way, that’s my cat Sadie in the picture. She also advises me on what to read and has a keen ear for music as well.