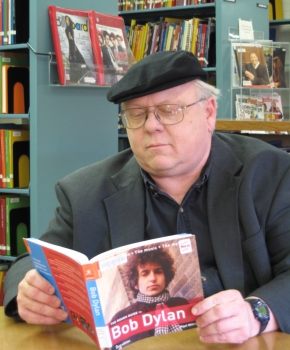 Our featured Reviewer for September 2006 is Scott S. Scott has worked for the libraries in a number of different branches and in several different departments, for over 25 years, and frequently pops up with reviews of interesting titles for our Staff Recommendations displays and for the library’s BookGuide web site. His first review appeared on our site in April 2004. Reading has been an integral part of his life and career, as he indicates in his answers to our questions about books and reading:

I was born in Lincoln. Halfway through the 1st Grade we moved to Hastings, and I lived there until I came to UNL in 1970. I was always a voracious reader and lover of books. My mother says the first time I walked into the Children’s Department at the Hastings Public Library, I said, “It’s a veritable paradise!” I earned a Cub Scout merit badge volunteering at the library. I loved Dr. Seuss, Thornton W. Burgess (and his illustrator, Harrison Cady), and Freddy the Pig; later I devoured a whole series of American biographies and anything about mythology. By junior high I’d discovered comic books, as well as Robert Heinlein, Arthur C. Clarke, E.E. “Doc” Smith and Isaac Asimov. Then Robert E. Howard and H.P. Lovecraft.

I remember being a small child and wanting to read desperately. The Popeye cartoons on television always began with a ship’s doors opening and closing — there was writing inside there, and I wanted so badly to know what it said.

I read the ingredients on cereal boxes at breakfast. I read the little stand-up displays on restaurant tables over lunch. I’ve read the labels on bottles of Asian hot sauce written in a half-dozen languages, comparing the words for the different ingredients. I’ve worked in a public library for more than a quarter of a century. I’d consider books and reading “slightly important.”

In the movie “The Wild One,” Marlon Brando is asked, “What are you rebelling against?” His answer: “Whattaya got?” I’m sort of like that. If it looks interesting, I’ll read it. I’m particularly attracted to biographies, and a select cadre of fiction writers. I love comics and graphic novels, of course.

Very little. I abhor the school of reviewers/critics who take a holier-than-thou, more-erudite-than-thou approach. I just try to pass along what I like. Your mileage may vary.

Samuel Langhorne Clemens. But if you’re talking contemporary, you may take your pick among Kurt Vonnegut, George MacDonald Fraser, and Walter Mosley.