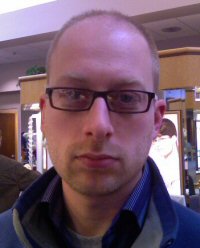 Our featured Reviewer for August 2007 was Sean S. At that time, Sean worked at the Eiseley Branch Library (he’s since transferred to our Virtual Services department), and his reviews show up regularly on our Staff Recommendations displays and on the BookGuide web site. Reading has always been a part of his life and career, as he indicated in his answers to our questions about books and reading, back in 2007:

I grew up in Crete, running around the public library where my mother was a volunteer librarian. I was always encouraged to make my own choices in books and I know that it was for that reason that I became an avid reader. There’s nothing quite like making your own choices.

I’ve been reading as long as I can remember. The first books that I really remember reading diligently were the Hardy Boys. I made it through the series in a few weeks. During my teen years, I mainly read fantasy books: Piers Anthony and Robert Asprin were some of the writers. Fantasy was great to inspire reading at that age because of the titillation factor (fantasy readers will know what I’m talking about).

Very. I feel like the individual I’ve become is a direct result of the books I’ve read. They’ve shaped me and given me insight into the world. I read a wide variety of fiction and non-fiction, and am always left with something to take away from each book.

This is the million dollar question. I use databases like NoveList, stumble on books while working, and often go to the shelves and randomly pull a book. Lately, I’ve found some great new fiction in the magazine Mystery Scene. Although, just as anyone, I go through dry spells where everything seems not-so-good. I have no problem releasing a bad book.

I read a lot of authors and across a variety of genres, so making recommendations is a chance to remember some of the books that I’ve been through and hopefully make a memorable experience for another reader.

Norman Mailer. He’s one of the authors I enjoy the most, because he writes about anything, and does it well. He’s written a first person narrative of Christ’s life, books on the CIA, death-row, and war. He’s a writer who’s feisty and full of himself, which I think any great writer should be. And, he loves to take risks.