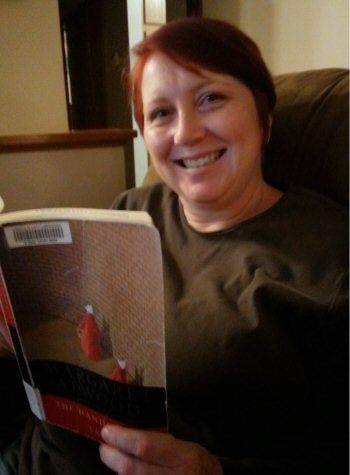 Our featured Reviewer for March 2015 is Tracy T. Tracy’s been with the Lincoln City Libraries off-and-on now for a few years. Her reviews have started showing up regularly on the Staff Recommendations pages of the BookGuide web site, and on the Staff Recommendations display at Bennett Martin Public Library, starting in 2014. Tracy’s start with developing a love of reading came about in an unusual way, as you’ll see in her answers to our profile questions:

I was born in Omaha, NE, and lived there until I was about 4 years old. My family moved to Wahoo, NE, in the early 70’s and I went to elementary and high school there. Looking back, I can see that growing up in a small town (the population, at that time, was about 4,000) can be very beneficial: my older brother and I rode our bikes or walked just about everywhere we went, including the pool, the movies, and the library.

I’m embarrassed to say that I was a reluctant reader until I got into 5th grade. That was the year that my school had a “read-a-thon” to raise money for Multiple Sclerosis. We were supposed to get pledges from friends and neighbors–so many cents per book, I believe–and then do our best to read the most books. The top prize, for reading the most and raising the most money, was a really cool watch. Apparently, I really wanted that watch — I won! I’d never really been competitive before, and I haven’t really been since, but I had to have that watch. The added benefit of raising all that money (probably a couple hundred dollars), and getting the coveted watch (which I no longer have, of course), was that I discovered I actually LOVE reading! I realized that I hadn’t enjoyed reading, before, because I hadn’t found the right books yet.

One thing I read, during that contest, was a series of books called The Three Investigators. I’d tried a few Hardy Boys and Nancy Drew books, and I liked the idea behind them, but they didn’t seem very contemporary to me. Something about the Three Investigators (who were supposedly assigned to each of their mysteries by Alfred Hitchcock!) really lured me in. I couldn’t get enough of those books!

Books are a huge part of my life now. I try to get an hour or two of personal reading in each day; but what’s almost as important than the actual pleasure I get from reading is the fact that my children see me reading and know how much I love doing it. I believe that I can best teach by the examples I lead, and when my children see me voluntarily reading a book, rather than watching TV or getting on the computer, they see that this is something I have a strong desire to do. I really feel that it has helped influence all three of my kids to become more avid readers! 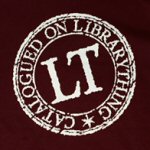 Lately, I’ve been reading two to four books at a time–I never used to be able to do that! I have a couple of actual books going at the same time (usually spread out throughout the house), as well as an ebook at the ready, plus an audiobook in the car for any time I have a few minutes’ drive on my own (without passengers). I love hearing what patrons and friends have been reading. I’m always writing down book titles on slips of paper and coming home to transfer those notes to my LibraryThing account, under “to read”. I also like to check out books that have been reviewed by entertainment magazines, like People or Entertainment Weekly.

I really just like to share with others what I think about something I’ve enjoyed; conversely, if I read something I don’t like, I’m sure to be even more vocal about it, especially if the storyline is good but the writing itself is bad.

Bennett Martin Public Library was my home library when I first moved to Lincoln to attend UNL and study English, back in the late 80’s. I absolutely loved the architecture and the character of the building. I continued to patronize Bennett Martin after graduation and during the early years of my marriage. Once I’d had two of my children, I began taking them to story-time at the Gere Branch, largely because they already had friends who attended that library. Soon, Gere became our regular stopping spot, for many years. As I entered my 40’s, I realized my three kids would all be in school full-time soon and I would want to re-enter the work-force. I decided to go back to school, this time at UNO, and get a second bachelor’s degree, in Library Science. I was offered an internship position at the Walt Branch, which, by then, was closest to where my family now lives. After graduation, I was offered temporary positions at Walt for two summers in a row. This past fall, I obtained a permanent position at the Bennett Martin, my original ‘home’ library.

I have a couple of favorite literary-related websites I love to visit: for work, I often utilize www.fantasticfiction.com – it’s a terrific resource for helping patrons find what’s next in a series, or even just to see how many or what titles an author has published; for personal use, I’ve recently become a fan of librarything.com – I had previously used Goodreads.com quite a bit, as it’s got more of a “social media” flavor to it… however, I’ve come to realize that, for my needs, LibraryThing is better equipped to handle all the items I want to record.

It’s difficult for me to say I think one author would be good for everyone to read, because tastes vary so immensely — which is good for the library! However, if you want to know who my all-time favorite author is–who I tell a lot of people to try — it would definitely be Stephen King. I know his writing is not for everyone, and some of his content is definitely what you would consider geared toward a mature audience… but the writing itself is so enjoyable to me, and although he tends to write what people might think of as horror, he tends to have very appealing, relatable characters.