These recommendations were posted May 2004

Alton Brown doesn’t claim to be a chef — only a food scientist. In this book, he brings a sarcastic sense of humor and the sensibilities of a scientist to the cooking processes involved in food preparation. Enlightening and entertaining at the same time!

Any of the books in the Horatio Hornblower series by C.S. Forester are well worth reading, particularly if you enjoy British naval history or adventure. For more information about this saga, take a look at the book The Hornblower Companion [1964]. For additional Naval Adventure fiction, check our Anchors Aweigh! on-line booklist.

See more books like this on our Anchors Aweigh booklist

The novels in Charlaine Harris’ Southern Vampires series are an engaging mix of SF/fantasy, mystery, thriller and erotic romantic suspense. Cashing in on the current popularity of vampire fiction, these novels explore an alternate contemporary world in which the availability of synthetic blood has allowed the previously shunned vampire culture to go mainstream. With a sassy, strong-willed female protaganist (with some paranormal secrets of her own), these novels have a strong sense of place, simple dialogue, and intriguing characterizations. The books in the series are: Dead Until Dark (2001); Living Dead in Dallas (2002); Club Dead (2003); Dead to the World (2004); Dead as a Doornail (2005); Definitely Dead (2006); and All Together Dead (2004).

Testimony of an Irish Slave Girl
by Kate McCafferty

A young Irish girl is kidnapped and sold into slavery in the Caribbean.

What Jane Austen Ate and Charles Dickens Knew: From Fox Hunting to Whist — The Facts of Daily Life in 19th Century England
by Daniel Pool [942.08 Poo]

This book should be required reading before delving in Austen, Dickens, Trollope, Hardy or other 19th century British authors. It explains the aspects of everyday life in that period that the authors took for granted but that are unfamiliar to us today. Interested in Jane Austen-related novels? Check out our In Want of More Jane Austen? booklist!

The Dragons of Springplace
by Robert Reed

Lincoln, Nebraska science fiction author Robert Reed is perhaps better known for his 130+ short stories than he is for his 10 novels. The Dragons of Springplace [1999], is his first collection of short stories, and includes two Hugo-nominated works and one Nebula-nominated work. Reed tells very personal tales that stretch the imagination or take standard “types” of stories and go where you don’t expect them to. He is considered by many critics to be one of the best genre short story writers currently working.

See more books like this on our Robert Reed booklist

Moving Out: A Nebraska Woman’s Life
by Polly Spence [B Sp275]

This book has one of the clearest explanations of DNA I’ve ever read. It tracks the theory of mitochondrial DNA passing undiluted from mother to daughter. Among Europeans and North American caucasians, the author finds seven DNA sequences from which most human beings are descended. The writing in this science book is clear and easy to understand.

[ official Web site tied in to the book ]

Hysterical fiction at its finest! 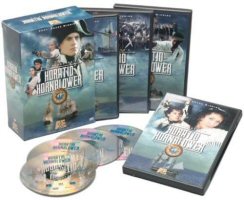 The Horatio Hornblower Saga
on Video/DVD by C.S. Forester

last updated March 2020
* Please Note: The presence of a link on this site does not constitute an endorsement by Lincoln City Libraries.