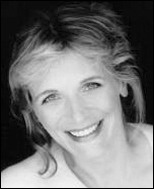 Harley Jane Kozak is the youngest of eight children born to Joseph and Dorothy Kozak, an attorney and a music teacher in Wilkes-Barre, Pa. When Joe died a year after Harley’s birth, Dorothy packed up her children and moved to North Dakota and then on to Lincoln, Nebraska, to teach at the University there.

Harley first appeared onstage at age 5 in a college opera production of Dido and Aneas, broke gender barriers in 4th grade by playing the title character in Benjamin Franklin and discovered the value of nepotism when she became a recurring 5th grader on the educational TV show, Music With Mrs. Kozak. As a junior in high school she was tap dancing in the Nebraska Repertory Theater, and the following summer supporting herself full-time with a $55-a-week paycheck from The Legend of Daniel Boone in Harrodsburg, Kentucky, playing Indian Maiden #2.

At age 19, having done some 30 plays, Harley hit the road and ended up on New York’s Lower East Side. She was accepted into the the professional acting training program at NYU’s School of the Arts (now Tisch School of the Arts). Completing the program 3 years later, Harley was cast in the feature film The House on Sorority Row, and said goodbye to a decade of waitressing. Soon she got a soap opera (Texas) and a husband, and a year and a half later a cancellation notice and a divorce. After 2 years on Guiding Light, she moved to L.A. to do Santa Barbara, her last soap, where she met her end being crushed to death by a giant neon letter “C”.

Harley went on to star in feature films Parenthood, Arachnophobia, The Favor, Sideout, The Taking of Beverly Hills, Necessary Roughness, All I Want for Christmas, Magic in the Water, and Dark Planet, and prime time series Knightwatch, Harts of the West, Bringing Up Jack, Charlie Grace, and You Wish. TV movies include The Amy Fisher Story, So Proudly We Hail, A Friend’s Betrayal, Unforgiveable, Emma’s Wish, The Android Affair and Titanic, the miniseries. Her stage appearances include The Effect of Gamma Rays on Man-in-the-Moon Marigolds, A Midsummer Night’s Dream, The Seagull, Twelfth Night, Cat on a Hot Tin Roof, A Streetcar Named Desire, Love Letters, Man of the Moment, Lost in Yonkers, and Born Yesterday.

Harley Jane Kozak currently lives in California with her husband, three children and two dogs. Together with three fellow mystery/romance/chick-lit authors (Nancy Martin, Sarah Strohmeyer and Elaine Viets), Harley contributes to the Lipstick Chronicles writing blog. You can also visit her own personal site at HarleyJaneKozak.com.

The staff of BookGuide thank Harley Jane Kozak for being our latest interview subject for the BookGuide Bulletin newsletter!

BookGuide: What influence (if any) has your time in Nebraska had on your fiction writing?

Harley Jane Kozak: I mostly grew up on a farm outside of Lincoln and the hours spent in the cornfields in the company of only dogs and cats made me rely on my imagination for entertainment. Also, I turned to books. Later, I found that Nebraska has a very open heart when it comes to the creative arts, without the intensity and competition that comes with the territory in New York and L.A. So it was a wonderful place to come from..

BG: Your Wollie Shelley novels really tap into contemporary culture, especially with Wollie getting involved in serial dating and reality television. What kind of research went into making these experiences so realistic?

HJK: Research? That’s just my life. Okay, for the reality TV I did tag along on the shoots of a show called Blind Date because my husband, a lawyer, represents the producers and they were kind enough to give me endless material for my fictitious “Biological Clock.” But the dating? That came from my own 20 years of blind dates (over 50 of them) as I tried to find True Love (which I eventually did).

BG: The humor of your literary characters just seems so natural. Which is harder – Comedy or Drama? (Or Romance?)

HJK: What’s really hard is sex. So hard that I write it up to the moment of consummation, then fade to black. My books tend to start out more dramatically — even melodramatically — okay, even depressing — and then, several drafts later, turn comic. Humor in my novels — if you find them funny, and I hope you do — arises from the perspective my narrator has on things rather than from the situations themselves.

BG: Your supporting characters are strongly realized. Are any of them inspired by friends and family, or are they purely from your own imagination?

HJK: It’s all friends and family thrown into a mental Cuisinart and scooped out and formed into people living in Los Angeles. I exploit my life and everyone I know.

BG: For you, what’s the most difficult part about writing?

HJK: To deal with the voice that says, “you’re no good, and whatever made you think this was a good idea, writing a book?” and then, the inevitable criticism, which just comes with the territory. To look at other people’s opinions and weed out the useless stuff from the ideas that will make my work better.

HJK: Autographing books is pretty easy. Typing the words, “THE END.” And getting the ideas–I have drawers full of them. And I start out wanting to put too much into each book. It’s like the way I pack for a trip: Open the suitcase, throw in everything I want to take, discover the suitcase won’t zip shut, and remove half the stuff.

BG: Are there any authors or specific works (either in the mystery field or otherwise) which have influenced you as a writer?

HJK: Endless numbers! But sticking to mysteries: Georgette Heyer, for comedy, Mary Stewart, for romance, and John D. MacDonald for playing with philosophical ideas while dealing with murder.

BG: Do you have any advice for aspiring mystery writers?

HJK: Everyone’s path is very personal. Mine was to take classes and join organizations and go to writers conferences. Especially classes. I grew up on the campus of UNL, where my mom taught Music, and I’m really at home in school. UCLA Extension Writers Program was a gold mine for me. And Mystery Writers of America and Sisters in Crime and Romance Writers of America are organizations filled with information for aspiring writers. Mystery and romance authors are among the most generous people in the world. There are “rules” in every genre (except maybe for literary fiction), and learning them is pretty easy, and invaluable for getting published.

BG: What authors do you, yourself, read? Anybody who you think deserves more attention?

HJK: The two greatest mysteries I read this year were Cornelia Read’s A Field of Darkness (her first book!) and Robert Ferrigno’s Prayers for the Assassin. I’m going to be first in line for his sequel.

BG: Can you give us a hint about what you’re working on now?

HJK: I just finished Dead Ex, my 3rd book, and am about to start my 4th, working title Dating Hit Men.

BG: Finally, is there anything you’d like to say to your fans back in your old stomping grounds of Lincoln, Nebraska?

Check out the Harley Jane Kozak booklist here on the BookGuide site!

Interview conducted by Scott C. — August/September 2006
Posted to the BookGuide site in October 2006