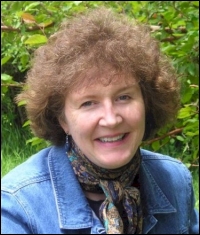 Author Lori Van Pelt was born and raised in Banner County, Nebraska, growing up on her parents’ wheat farm and cattle ranch. Lori began writing while attending Banner County High School in Harrisburg, Nebraska, and had her first poem published during this time. Following high school, Lori attended Nebraska Western College in Scottsbluff, Nebraska, graduating in 1981 with an Associate of Applied Science in Business Degree. She earned a Bachelor’s Degree in Finance with honors from the University of Wyoming in 1993. After graduation, Lori accepted a position as a staff writer for the Saratoga Sun newspaper. Shortly afterwards, Lori married Eugene Walck, Jr., and continued to pursue her writing while living on the Walck ranch in Saratoga. Lori currently writes for the WREN (Wyoming Rural Electric News) Magazine, serves as a correspondent for the Casper Star Tribune, and is a frequent essayist for Wyoming Public Radio’s “Open Spaces.” She is an active member of The Author’s Guild, Women Writing the West, and Western Writers of America. Lori has had articles or stories appear in numerous national magazines. She is the author of several books and short stories.

The staff of BookGuide thank Lori Van Pelt for being our first author interview candidate for our website!

BookGuide: At what point in your life did you first consider writing as a career?

Lori Van Pelt: I began writing seriously in high school. My English teacher, Beverley Edens, encouraged my interests in literature and writing. At that time, I wrote a lot of poetry. Even though I studied business in college and later worked in the banking industry, I continued writing. After earning my degree in finance from the University of Wyoming, I took a job as a staff writer for the Saratoga (Wyoming) Sun. That’s when I realized I loved writing enough to take a chance on free-lancing. I’ve been a free-lance writer now for twelve years and have written seven books — three of which likely will never be published but provided me with good practice –and numerous articles for newspapers and magazines.

BG: You have written both fiction and non-fiction books and short stories. Do you have a preference for one type over the other?

BG: Where do you get the inspiration for your writing?

LVP: Everywhere! From my personal background, from history, from nature, from people I’ve met or have wanted to meet, from my family…. The list goes on and on. Inspiration comes, for me, both from being open to life experiences and from the writing process itself.

For example, my nonfiction Dreamers and Schemers series introduced me to many people in Wyoming’s history, and through studying their lives and the era they lived in, I became inspired to write short stories about the nineteenth-century West as well. I love to let my imagination wander.

BG: How have your experiences growing up in rural Nebraska affected your writing?

LVP: My family moved to Nebraska in 1887, and they homesteaded in Banner County. The stories of the pioneers and of my own pioneering ancestors have always intrigued me. My parents were both great readers, and they passed their love of reading to me. They gave me such a loving environment in which to grow and learn that writing likely sprang naturally from these experiences. My paternal grandfather played the fiddle by ear, and my mother’s mother played the piano by ear, so music has also always been a cherished part of my life. In my short story, “The Fiddle’s Lament,” in my short fiction collection, Pecker’s Revenge and Other Stories from the Frontier’s Edge (Univ. of New Mexico, 2005), I wrote the tale from the point of view of the fiddle. I still enjoy playing the flute and the piano and singing, and music moves me on such a deep, heartfelt level that it will always be part of my writing.

In that same book, I included my fictional version of “The Legend of Lover’s Leap.” Lover’s Leap is an outcropping of rock, a local landmark in my native Banner County, Nebraska, where an Indian maiden was said to have leapt to her death because of a failed love affair, and as a child I found that legend intriguing. So I let my imagination go to work and came up with my own story.

Also, I was so fortunate to have the support and encouragement of Mrs. Edens. In her classes, I read works by Nebraska authors Willa Cather and Mari Sandoz, and felt a great affinity to them. If they could become writers, having been raised on the prairie and knowing and loving the pioneers, then I thought I could, too!

BG: What kinds of books do you enjoy reading most?

LVP: I love to read, and I still enjoy works by Cather and Sandoz, and I also have enjoyed reading books by Bess Streeter Aldrich. But I’m very eclectic in my reading. My favorite nonfiction authors are David McCullough, John McPhee, and Thoreau. In fiction, I range from the mysteries of Elizabeth George and Tony Hillerman to Eudora Welty’s fine works to Edgar Allen Poe’s suspense to Shakespeare’s plays. I’ve also enjoyed reading Charles Dickens, Pearl S. Buck, Thomas Wolfe, Louis L’Amour, Dorothy M. Johnson (a western short story writer), John Jakes, Ray Bradbury, Danielle Steel, Sharyn McCrumb, John Steinbeck, and Ernest Hemingway. In Louis L’Amour’s book, Education of a Wandering Man, a list of the books he read in the 1930s was included, and I am working on reading some of those same authors—Wolfe, Poe, Tolstoy, Shakespeare, Emerson, Thoreau. L’Amour was such a voracious reader that I won’t be able to keep up with his schedule, but I’ve set a personal goal to read as many as I can. I also still love poetry. My favorite poets are Robert Frost and Emily Dickinson.

BG: What book or story are you currently writing at this time? (Can you give us a hint?)

LVP: I’m currently completing a second collection of short fiction, again with a strong historical flavor, and have a couple of biographies in the works.

Writing has offered me some extraordinary opportunities to meet a wide variety of people and to travel throughout the nation. I’m an active member of Western Writers of America and Women Writing the West, and recommend that writers join writing groups or at least attend conventions to network and learn more about the craft of writing. Through these groups, I’ve met other authors who not only share my passion for writing but who have also become dear friends.

Check out the Lori Van Pelt booklist here on the BookGuide site!