The Nebraska Federal Writers’ Project: Remembering Writers of the 1930s – A Family of German Immigrants 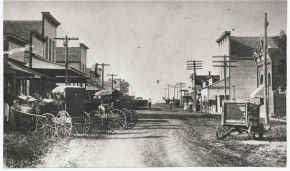 Rudi, born in 1907, was the youngest of five children, four boys and one girl, raised on the family farm one mile northwest of Eagle, Nebraska. Snapshots taken on the farm in the winter of 1919 show a neat farmstead with a white frame house protected by fair size evergreens to the North, a large barn, granaries, a large tool shed, a chicken house, a corn crib and a garage (for the horse drawn carriage). The nearby town of Eagle, shown here (picture on the right) in 1908 seemed prosperous; it had electricity, a street light, and plenty of business from nearby farms. 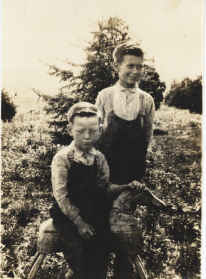 Rudolph (front, with rocking horse) and Henry Umland in 1912

Family life, from the evidence of family photographs and letters that Rudi excerpted and transcribed for his scrapbooks, was affectionate and active, and the Umlands had many nieces, nephews and cousins nearby and these relatives visited and corresponded regularly.

This happy and close-knit family encountered its share of sorrow, too. Rudi’s oldest brother Carl joined the Navy in 1913 because of a failed romance. In basic training Carl first fell ill with measles, then pneumonia and then, when convalescing at the Naval Training Station in far off Great Lakes, Illinois in February of 1914, he took his own life. “For a long while afterward, a certain somberness prevailed in our household.”

Sixty years later, in preparing his Scrapbook, Rudolph Umland transcribed and typed excerpts from some twenty-two letters to Carl Umland from his mother, sister, brothers, cousins and friends, found among Carl’s effects. The pages of excerpts give us a picture of an affectionate extended family, reaching out to somebody who had taken a path they did not really understand. Evidently no letters from Carl could be found to be included, and the contrast between the spirit of the family and that absence strikes a slightly bitter note, though a picture is included of a dapper young man in a fading photograph taken in 1913.

Later in life, Umland once complained that he felt plagued by suicides. His younger cousin Arthur hanged himself in 1926. Thereafter strangers, the threats of a co-worker and the departure of the writer Weldon Kees probed sensitive memories. Umland at some point decided that he had little use for this sort of self-pitying foolishness, and his responses to such tragedies, while properly sympathetic, were also measured with reproach.

A Web Exhibit from The Jane Pope Geske Heritage Room of Nebraska Authors at Lincoln City Libraries. This project was supported in part by the United States Institute of Museum and Library Services under the provisions of the Library Services and Technology Act, administered through the Nebraska Library Commission. Exhibit & Text by Stephen Cloyd. © Lincoln City Libraries, 2007Save