In December of 1914 seven year old Rudi Umland writes his sister Clara that he does not yet have the whooping cough, that he shared the month’s spelling prize with another student, and that he is practicing a piece for the school’s Christmas program. In snapshots of the Umland farm, of Rudi and his family from just after World War I through the mid nineteen-twenties we see a boy growing up on a relatively prosperous farm. The work is hard, done by hand, or with a team of horses, but there are many hands to help. The farm raises a lot of corn, but other crops, too, as well as cows, pigs, chickens, ducks and geese. Rudi does his chores, bringing in the mail, tending to the chickens, the ducks and geese, and he now attends school in nearby Eagle.

Life on the farm has a seasonal rhythm of work, regular visits with aunts, uncles and cousins, and school. Eagle builds a fine new Consolidated School that opens in 1920 and Rudi and his classmates move from a one room frame schoolhouse to continue their schooling in this impressive new edifice. When not in school, Rudi works on the farm, tends a garden, hunts rabbits in the snow, traps skunks, and reads. 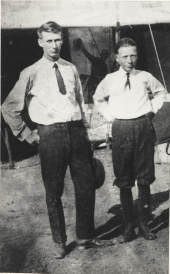 Herbert and Rudi Umland at the Nebraska State Fair in September, 1920. It was the custom for boys to wear knee-pants until age 13.

In the winter of 1921-22, after reading George Eliot’s novel Silas Marner for a ninth grade English class, Rudi writes to district court Judge William Morning in Lincoln to ask him whether, if the events in the story had taken place in Nebraska in 1921, a Nebraska court would have made the same decision regarding the custody of the child as the English court did. Judge Morning re-read the novel and wrote Umland to describe what his decision would be if the case had come before the court in Lancaster County, Nebraska. (View the Judge’s Reply)

The exchange is evidence of Rudi Umland’s growing interest in literature and his inquisitive nature. And it is worth noting that Umland chose his correspondent well. Judge Morning specialized in family and juvenile cases, making him the right sort of judge to consider the question; and then too, the Judge was a man who wore his considerable learning lightly, and was renowned for his often self-deprecating wit. When Morning was shot down in his courtroom in 1924 by an insane assailant, the newspapers remembered the Judge’s wit, compassion and intelligence.