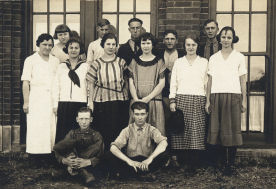 In the photograph (right) of the Junior Class, Eagle High School, 1923, all the students appear to have dressed up for the occasion. Some of the boys are wearing sweaters and ties. Bennie Headley, Rudolph Umland’s favorite and perhaps prettiest cousin, the first girl in town to “bob” her hair in the modern style of the 1920s, stands at the center of the middle row in her best fringed dress. Rudi Umland, sitting cross-legged on the ground with his hat on his knee, front left in the photograph, is the only one among the boys that really looks like a farm boy–but he too has dressed for the occasion, in clean, new, well pressed overalls and high-topped boots.

In September, 1924, Rudolph Umland and Arthur Reiter of the Eagle Blue Ribbon Corn Club won the Blue Ribbon for their Grain Booth Exhibit at the Nebraska State fair. If Rudy (with a “y” now instead of an “i”) was proud to be a hard-working farmer’s boy, his classmates also saw him in another guise. It is not uncommon for the actors in a school play to be type cast. Students seem to feel that it is more educational, and doubtless more amusing for a knowing audience, if an individual is pressed into playing a character with certain similarities to his or her own type. In the April, 1925 Eagle High School senior class play, “Can’t Keep a Good Man Down,” Rudolph Umland was cast as “Dr. Carver” the educated and worldly friend of the erstwhile idle and wealthy hero of the piece. At graduation that spring, Rudy Umland was Class Valedictorian, having just bested his favorite cousin, Bennie Headley, for the honor. 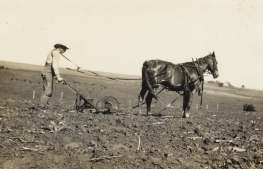