The Nebraska Federal Writers’ Project: Remembering Writers of the 1930s – Circumventing a Crisis

Mari Sandoz might have been the best candidate to head the Nebraska Federal Writers’ Project, though she may not have wanted the job. After a punishing thirteen year writer’s apprenticeship in Lincoln, sheer poverty and profound discouragement about publishers’ rejections of her biography of her father sent her back to the Sandhills in 1933. Yet in January of 1934 she returned to Lincoln when Addison Sheldon of the State Historical Society offered her a job supported by New Deal funds. She acted as Sheldon’s research assistant, then as director of personnel for the Historical Society and associate editor of Nebraska History. She supervised between 30 and 40 Civil Works Administration-Federal Emergency Relief Agency workers working for the Historical Society through the FERA historical records program. She published articles and short stories, and though deeply disappointed by publishers’ rejections of her book, she was coming to be widely known.

In 1935 congress, embarrassed by FERA’s vulnerability to political patronage and local corruption, replaced FERA with the Works Progress Administration(WPA). In other states, personnel in FERA historical records projects helped set up the WPA’s state Writers’ Projects. In Nebraska that did not happen. Perhaps Mari Sandoz, ever jealous of her time and reluctant to take on any job that took her away from her sources and her own writing, would have turned down such an offer, had it been made, anyway.

In October of 1935, on the recommendation of James Lawrence, editor of the Lincoln Star, Elizabeth Sheehan, an ex-schoolteacher without publications or editorial experience, became director of the Nebraska Federal Writers Project. “Miss Sheehan’s chief qualification for the position,” Umland recalled in a letter to Monte Penkower, “appeared to have been her need for employment.” Sheehan had no administrative experience, and soon appeared disorganized and consumed by irrational fears. Umland, hired as her assistant, joked that on his first day on the job, she told him that the other employees were after her job and on his second day, she accused him of being among them. 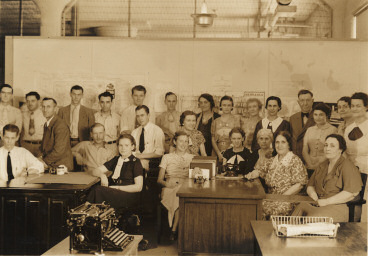 Nebraska Writers Project workers in the Terminal Warehouse near the rail tracks west of the University. Rudolph Umland is the third person from the left, sitting in the front row. Elizabeth Sheehan is second from the right in the front row, in a patterned dress with a white collar.

By early 1936, at the latest, the Washington administrators of the Federal Writers’ Project knew that the Nebraska project was disorganized and going nowhere. They looked to replace Elizabeth Sheehan. On March 10th, 1936, Lawrence Morris, one of two influential field administrators of the Federal Writers’ Project wrote Rudolph Umland a letter touching on the crisis that also revealed the quality of the connection between the Nebraska Project and the Federal Project. Morris commiserated with Umland about losing Loren Eiseley and another employee to greener pastures. He offered news about Sheehan in confidence, adding however that “should you be discussing the situation with Mari Sandoz, you could speak frankly to her.” The editor of the Lincoln Star, James Lawrence, had written “an excited letter” to his political ally, Senator Norris, attacking the field administrator for trying to replace Sheehan, and “among other things he says that Miss S. is threatening to commit suicide.” Another field administrator would have to take the matter in hand.

Sheehan saw her own assistant, Umland, as the greatest threat. In desperation, she accused him of being a communist. “Miss Sheehan discovered that my brother and I had been present when 5000 farmers marched on the State Capitol in 1933 and presented demands for a farm mortgage moratorium to the legislators.” There were Communists at the protest, but they did not impress the farmers who “were the dispossessed and those who feared dispossession from their farms.” Sheehan exaggerated the story of the march “into a great Communist plot of which [Rudolph Umland] and Mother Bloor were the chief instigators.” In 1941, long after Sheehan’s effective “departure” (she remained on the payroll) this accusation led to an FBI investigation of Umland, which cleared him with the comment that the only thing red about him was his mustache.

In time, Elizabeth Sheehan became a legend in the Washington offices of the WPA Federal Writers Project. She was believed to be, as Jerre Mangione notes, the former mistress of the well connected editor of the Lincoln Star. Sheehan’s attempts to unload her employees failed. But she herself could not be replaced, either. Word came, Umland thought directly from Senator Norris in Washington, that “Miss Sheehan was to have her desk as long as there was a Writers’ Project in Nebraska.” The Washington administrator of the FWP finally found an inelegant solution to the problem, her desk was moved to her apartment, where she continued to be “employed” as an editor. Her salary continued at the same rate. The Nebraska Project paid no further attention to her. In 1938, when Nebraska’s WPA administrator Dwight Felton finally decided that this looked so bad that it would be better to shut down the Nebraska Writers’ Project than to allow her salary to continue, Star editor Lawrence dissuaded him. Sheehan continued to draw her director’s salary from the Project until its final demise in 1942.

After deposing Elizabeth Sheehan, Federal Administrators sought local advice about a replacement, and Umland suggested J. Harris (“Jake”) Gable, an unemployed Librarian and a founding student editor of Prairie Schooner who had published an adventure book for boys. Lowry Wimberly quickly dispatched a letter of recommendation for Gable, and he became director of the Nebraska Project. Umland himself was now appointed Assistant State Director.

Gable and Umland would make an effective team, Gable was a bon vivant and effective promoter who happily left the editing to Umland. Umland’s funny stories about Gable’s relentless self-promotion, including the beginning of his ten year campaign to get himself into Who’s Who in America make humorous reading, but Gable’s effectiveness impressed federal administrators, who made him a regional field supervisor in addition to his Nebraska duties.

Morris’s letter to Umland and the resolution of this crisis reveal the informal but guiding role that Mari Sandoz and Lowry Wimberly played in the Nebraska Federal Writers’ Project. Federal administrators relied on their suggestions because they knew and respected them as writers and administrators. Their influence would always be informal, neither would ever become a paid employee of the Project, but their advice, criticism, and mentoring would help insure the success of the Nebraska Project.