The Nebraska Federal Writers’ Project: Remembering Writers of the 1930s – From Student to Hobo 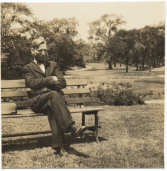 Rudolph Umland in a Lincoln park in his first year as a student at the University of Nebraska.

Umland’s studies would be interrupted by work on the farm, and when his brothers did not really need him much anymore, by rail hopping travels as a hobo. At this stage in his life, Umland wrote years later, “I was an imaginative introvert with an appetite for books and adventure.”

Despite the hard times, Umland expanded his horizons, and showed his determination to make life an adventure. At the University Umland worked hard, acquired a wide array of interesting friends, and impressed some of his professors. The relations between University faculty and students were more intimate and far less anonymous than now. In Freshman Composition, one of Umland’s teachers was Kenneth Forward, who became a life-long friend. Umland began to write for University Publications. His first publications, all in the Freshman Scrapbook in the years 1926-1927, included a description of a Russian dancer, a review of Joseph Conrad’s “The Nigger of the Narcissus,” and an essay on Thoreau. Perhaps these efforts, like the picture of Umland on the park bench above, express the conventions of the time and not much else. But the essay on Thoreau seems more heartfelt; it exhibits a light, whimsical touch in treating Thoreau’s narrative about rivers as a river of ideas. Umland’s teachers, Kenneth Forward, Fred Christensen, and later, Lowry Wimberly, detested conventional feeling, even as they appreciated the craft of writing and the power of literary tradition.

In April of 1928 Umland dropped out of his third year classes and stole his first ride on a freight train. He traveled west from Lincoln to Colorado, ultimately visiting Denver, Ogden, Pocatello, Soda Springs, Rawlins, North Platte, Grand Island, and Omaha, and returning to Lincoln by hitch-hiking. His Chinese friend, Chen S. Yuan, who published poetry in Prairie Schooner and who had shared the same rooming house earlier, was now returning to China and left Umland a photograph and his job as janitor at the Miller and Paine department store. Umland liked the job because it gave him time to read. 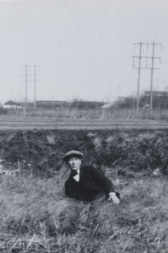 Rudolph Umland resting beside the tracks near Philadelphia, Pennsylvania, 1929

Freight hopping was a strangely popular mode of travel for Lincoln’s younger literary intellectuals; Loren Eiseley, Wilbur Gaffney, Preston Holder, and Umland all traveled the country by this means in the twenties or early thirties. There were many men on the move at this time, hopping freights, camping beside the rails, uprooted, looking for work, in the aimless migration of despair.

But the spirit of Rudy Umland’s travels was still one of adventure. He had been bitten by the travel bug, and in 1929 he took to riding the rails again. From 1929 to 1931 he traveled widely.

Umland interrupted his travels when and where-ever he could find labor, working at different times as a farmhand, a factory hand, dishwasher, logger, cellarman, longshoreman, ranch hand, fruit-picker, construction laborer, and deliveryman. He also took time to explore the country. In New York City in 1929 he stayed with Wimberly protege (and later University of Nebraska English teacher) Wilbur Gaffney and the two men spent time searching the city’s used bookstores for treasures. Umland drew a charcoal portrait of “the Gaff” and Gaffney and his wife Elizabeth wrote Umland a letter of introduction testifying to his good character that they hoped would help him on the road.

When he visited Washington D.C. later that year, Umland slept at the foot of sculptor Augustus Saint-Gaudens’ great hooded bronze at the grave of Henry and Marian Adams in Rock Creek Cemetery. What, we might ask, drew him there? Adams, the great cosmopolitan humanist and historian, grandson and great-grandson of American presidents, had been profoundly pessimistic about the reshaping of mankind by technology and commerce in the modern age. Saint-Gaudens’ brooding figure seems to mourn something larger than the individual fates of Marian and Henry Adams.